Konkani Muslims are a sub-ethnic group of the Konkani people living in the Konkan region of western India, who practice Islam. They speak the Konkani language.[1] 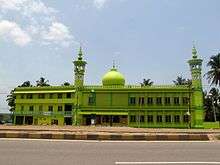 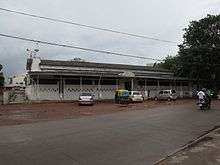 The history of Kokani Muslims settled in Mumbai (erstwhile Bombay) is documented in publications such as the Bombay Gazette and newspapers like The Times of India since the later part of nineteenth century. Many prominent Kokani Muslim families' names, their activities and contributions to social and cultural life are accessible.

Konkani Muslims are natives of Konkan region in Western India, the population is mainly concentrated in the Maharashtrian districts of Mumbai, Raigad, Thane, Ratnagiri, Sindhudurg. Muslim people of south Sindhudurg near Malvan and the former Maratha princely states of Sawantwadi and Oros speak a dialect of Konkani called Málvani language.

There is a large Konkani Muslim diaspora community of economic migrants working in the Arab states of the Persian Gulf, the UK, the United States, South Africa and East Africa (where they have been established for almost a century).

The cuisine of Konkani Muslims is non-vegetarian, mostly seafood. Its staple food is rice and bread made of rice (preferred at dinners) with fish and lentils or vegetables. It is mainly influenced by Maharashtrian cuisine. Konkani Muslims make different types of sweets which include baitho ghavno, sandan and bhanori.

They predominantly adhere to the Sunni Muslim Shafi'i maddhab (Islamic school of thought), unlike most Muslims from South Asia, who adhere to the Hanafi maddhab.