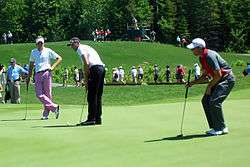 Ogilvy was born in Adelaide, South Australia to an English-born father Mike and Australian born mother Judy. He turned professional in May 1998 and he won a European Tour card at that year's Qualifying school. He played on the European Tour in 1999 and 2000, finishing 65th in his first season and improving to 48th in his second. He joined the U.S. based PGA Tour in 2001, and finished in the top 100 in each of his first five seasons. His first professional tournament win came in 2005 at the PGA Tour's Chrysler Classic of Tucson. In February 2006 he beat Davis Love III in the final of the 2006 WGC-Accenture Match Play Championship.

Ogilvy won his first major championship at the 2006 U.S. Open, becoming the first Australian to win a men's golf major since Steve Elkington at the 1995 PGA Championship. Ogilvy finished his round with a champion's flourish, making improbable pars on each of the last two holes. He holed a 30-foot chip shot at the 17th, and then got up-and-down for par at the 18th, dropping a downhill six-footer for his final stroke as all his competitors collapsed around him. Phil Mickelson and Colin Montgomerie needed pars on the final hole to win, or bogeys to tie with Ogilvy, but they ruined their chances by producing double-bogey sixes to give Ogilvy a dramatic win. Jim Furyk needed par to force a playoff but bogeyed the final hole.

This success moved Ogilvy into the top ten of the Official World Golf Rankings for the first time, at Number 8. He reached his highest placing to date on 9 July 2006 when he was ranked Number 7, and he returned to that rank in February 2007 after finishing as runner-up to Henrik Stenson while defending his title at the 2007 WGC-Accenture Match Play Championship. He has spent over 120 weeks in the top-10 of the rankings.[1][2]

Ogilvy won the 2014 Barracuda Championship, a tournament that uses the modified Stableford scoring system, with a winning score of 49 points. It was his first victory in over 4 years.

Ogilvy and his wife Juli have three children.

Ogilvy's current equipment effective as of the 2011 season.