George Graham Vest (December 6, 1830 – August 9, 1904) was a U.S. politician. Born in Frankfort, Kentucky, he was known for his skills in oration and debate. Vest, a lawyer as well as a politician, served as a Missouri Congressman, a Confederate Congressman during the Civil War, and finally a US Senator. He is best known for his "a man's best friend" closing arguments from the trial in which damages were sought for the killing of a dog named Old Drum on October 18, 1869.

Vest graduated from Centre College, Danville, Kentucky, in 1848 and from the law department of Transylvania University, Lexington, Kentucky, in 1853. He was admitted to the bar in 1853 and planned to move to California. However, while en route, he stopped in Pettis County, Missouri, where he defended a young African-American man accused of murder. Vest's client was acquitted but soon burned at the stake by an angry mob. Vest's own life was also threatened, but he nonetheless decided to stay in Missouri permanently, settling in Georgetown. In 1854 he married Sallie Sneed of Danville, Kentucky. They had three children, two sons and a daughter.

In 1860, after moving to Boonville, Missouri, he was elected to the Missouri House of Representatives and served as a Democratic presidential elector. As a Missouri representative he was chairman of the Committee on Federal Relations. Vest served in the House until late 1861 during which he wrote the Vest Resolutions in which he denounced coercion of the South.

When the Civil War broke out Vest was a strong "states rights" advocate during the Missouri secession crisis, and eventually sided with the Confederacy. He proposed the Secession Ordinance that was passed by the Missouri legislature in October 1861. The following year, he briefly served as judge advocate with the Army of Missouri, commanded by former Governor Sterling Price. He served in the House of Representatives of the Confederate Congress from February 1862 to January 12, 1865, when he resigned, having been appointed to fill a vacancy in the Confederate Senate. 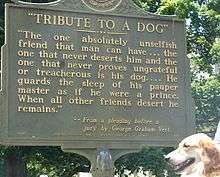 Old Johnson County Courthouse and location of the trial 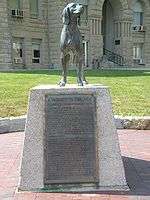 Statue in front of Johnson County courthouse in Warrensburg

After the war he returned to Pettis County moving to Sedalia, Missouri, and resumed his law practice. It was at this time in 1869 that Vest was asked to represent Charles Burden and Old Drum in the case that would make him famous, Burden v. Hornsby.

Vest took the case tried on September 23, 1870, in which he represented a client whose hunting dog, a foxhound named Drum (or Old Drum), had been killed by a sheep farmer, Leonidas Hornsby. The farmer (Burden's brother-in-law) had previously announced his intentions to kill any dog found on his property; the dog's owner was suing for damages in the amount of $50($971 2015 Inflation Adjusted), the maximum allowed by law.

During the trial, Vest stated that he would "win the case or apologize to every dog in Missouri." Vest's closing argument to the jury made no reference to any of the testimony offered during the trial, and instead offered a eulogy of sorts. Vest's "Eulogy on the Dog" is one of the most enduring passages of purple prose in American courtroom history (only a partial transcript has survived):

The speech has been used in movies which are set in Missouri and involve sheep owners who allegedly shoot the dog but are then shot themselves by the dog's owners, who are then tried for murder. 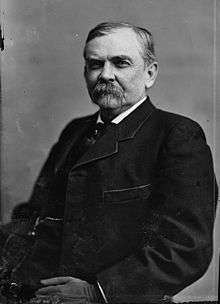 In 1877 Vest moved to Kansas City, Missouri, where he was elected two years later in 1879 to the United States Senate. He was chairman on the Committee on Public Buildings and Grounds (Fifty-third Congress) and served on the Committee on Epidemic Diseases (Fifty-fourth Congress), Committee on Public Health and National Quarantine (Fifty-fourth through Fifty-seventh Congresses). He was re-elected for three more terms in 1885, 1891 and 1897 and remained a US Senator until March 4, 1903, when he retired from public life due to ill health.

In 1882, Vest became aware of concession abuses and outright attempts at uncontrolled monopolies being proposed for Yellowstone National Park concessions by the railroads and other businessmen. He introduced and eventually helped pass legislation that required the Secretary of Interior to submit concession and construction contracts to the Senate for oversight thus stifling potential corruption and abuses. Throughout the remainder of his Senate career, Vest was considered the "Self-appointed Protector of Yellowstone National Park."[1]

"History is written by the victors"

Although the origin of the phrase "history is written by the victors" is not definitively known, Vest employed it in his 1891 speech to the Missouri ex-confederate convention, and may have been its originator. "In all revolutions the vanquished are the ones who are guilty of treason, even by the historians, for history is written by the victors and framed according to the prejudices and bias existing on their side."[2]

On August 9, 1904, Vest died at his summer home in Sweet Springs, Missouri, the last living Confederate States Senator. He was buried at Bellefontaine Cemetery in St. Louis, Missouri.