Augustus Hill Garland (June 11, 1832  – January 26, 1899) was an Arkansas lawyer and politician. He was a senator in both the United States and the Confederate States, served as 11th Governor of Arkansas and as Attorney General of the United States in the first administration of Grover Cleveland.

Garland was born in Covington, Tennessee, on June 11, 1832, to Rufus and Barbara (Hill) Garland. His parents moved to Lost Prairie in Arkansas in 1833, his father owning a store. Rufus Garland died several years later, and in 1836 his mother married Thomas Hubbard. Hubbard moved the family to Washington, Arkansas, near the Hempstead County seat of Hope.[1]

Garland taught at Brounstown School in Mine Creek, Sevier County, but returned to Washington to study law with Hempstead County clerk Simon Sanders, He was admitted to the bar in 1853 and starting his law practice with his stepfather. He married Sarah Virginia Sanders on June 14, 1853; they had nine children, four of whom survived to adulthood. Garland moved to Little Rock in June 1856, and Garland became a law partner to Ebenezer Cummins, a former associate of Albert Pike.

Garland became one of Arkansas's most prominent attorneys and was admitted to the bar of the Supreme Court of the United States in 1860.

Garland was a supporter of the Whig and American "Know Nothing" parties during the 1850s and was a presidential elector in the Arkansas Electoral College for the Constitutional Union Party in the election of 1860, voting for the party's nominees of John Bell and Edward Everett.

The election of Republican Abraham Lincoln to the Presidency of the United States led to the secession of the Deep South states from the Union. Garland consistently opposed secession and advocated Arkansas's continued allegiance to the United States. He was elected to represent Pulaski County at the 1861 secession convention in Little Rock, where he voiced his opposition. After Lincoln called for 75,000 troops from Arkansas to help suppress the Confederate States, Garland reluctantly gave his support to secession.

Garland was appointed to the Provisional Confederate Congress and was elected to the Confederate House of Representatives in the First Confederate Congress in 1861, where he was a member of the Committees on Public Lands, Commerce and Financial Independence, and the Judiciary. He was reelected in 1863, and in 1864 was appointed to the Confederate States Senate to fill the vacancy caused by the death of Charles B. Mitchel. As a Congressman, he made efforts to establish a Supreme Court of the Confederate States and supported President Jefferson Davis, with the exception of Daivs' aside suspending the writ of habeas corpus for the duration of the war (as had Lincoln in the North). He returned to Arkansas in February 1865, when it was clear the Confederacy was about to lose, so that he could help facilitate the return of his state to the Union.

At the end of the Civil War, Garland was pardoned by President Andrew Johnson on July 15, 1865. Despite this pardon, he was prohibited from practicing law due to a provision passed by the United States Congress on January 24, 1865, stripping the law licenses of all lawyers who worked with the Confederate government or military. Garland became the petitioner in the case of Ex parte Garland in which he made the argument that it was unconstitutional and a violation of ex post facto. On January 14, 1867, by a vote of five to four, the Court agreed. The ruling caused considerable uproar in the north, but gave hope that the judicial system could be used to prevent the implementation of the Reconstruction Act that had recently been passed by Congress. He then pushed the Supreme Court to hear the case of Mississippi v. Johnson which challenged the constitutionality of those acts, however the Court refused. 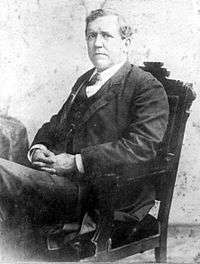 Garland was elected to the United States Senate for a term beginning in 1867, but was not allowed to take the seat as Arkansas had not yet been readmitted to the Union. He continued practicing law and observing the political scene from a distance. In 1872, with the Republican Party split into three factions, Arkansas Democrats sought Garland to help elect Democrats into the state legislature and had been considered for the Democratic nomination for the U.S. Senate. During the conflict known as the Brooks-Baxter War, he sided with Governor Elisha Baxter and was a primary strategist for him. He was an advisor and constitutional scholar at the next state constitutional convention and, with strong support from the Democratic Party, was elected Governor of Arkansas.

Garland was faced with a number of problems after taking office as Governor including turmoil in the state over threatening groups like the Ku Klux Klan, an ongoing congressional investigation over the Brooks-Baxter conflict and the state debt of $17,000,000. With help from the finance board, the debt was significantly lowered in two years time. Garland was a strong supporter of better education. He urged the legislature to establish schools for the blind and deaf, successfully advocated in appointing a new president for the Arkansas Industrial University, today the University of Arkansas, and helped found the Branch Normal College, today the University of Arkansas at Pine Bluff, which made education more accessible for African-Americans. Under his administration, he also oversaw the creation of the Arkansas Bureau of Statistics and the Arkansas Bureau of Agriculture, Mining and Manufacturing.

Garland ran successfully for the United States Senate in 1876 and was reelected in 1883. In the Senate, he served as a member of the Committees on Public Lands, the Territories and the Judiciary, serving as chairman of the Territories Committee in the 46th Congress. As a Senator, he made efforts to bring about tariff reform, internal improvements, as well as the regulation of interstate commerce and a federal prison system, federal aid to education and civil service reform.

Attorney General of the United States

Garland resigned from the Senate in 1885 after accepting the appointment of Attorney General of the United States by newly elected President Grover Cleveland, becoming the first Arkansan to receive a cabinet post.[2]

Not long after taking office, he became embroiled in a political scandal. While serving in the Senate, Garland became a shareholder in and attorney for the Pan-Electric Telephone Company which was organized to form regional telephone companies using equipment developed by J. Harris Rogers. The Bell Telephone Company brought suit against Pan-Electric for patent infringement after it was discovered that their equipment was similar to that of Bell's. Garland was ordered to bring a suit in the name of the United States to invalidate the Bell patent, breaking their monopoly of telephone technology, but refused to do so. However, while Garland was on vacation in the summer, Solicitor General John Goode authorized the suit.

A year long congressional investigation and constant public attention affected his work as Attorney General, however, despite having to serve under a cloud of suspicion, he was supported by President Cleveland. Garland was also the first, and to date only, United States cabinet secretary to be censured by Congress when, in 1886, Garland failed to provide documents about the firing of a United States Attorney.

President Cleveland lost reelection to Benjamin Harrison in the 1888 election and Garland left office at the end of Cleveland's term in 1889. He resumed practicing law in Washington, D.C. and published a number of books, including The Constitution As It Is (1880), Experience in the Supreme Court of the United States, with Some Reflections and Suggestions as to that Tribunal (1883), Third-Term Presidential (1896), Experience in the Supreme Court of the United States (1898) and Treatise on the Constitution and Jurisdiction of the United States Courts (1898). On January 26, 1899, while arguing a case before the Supreme Court, Garland suffered a stroke and died a few hours later in the Capitol. He was interred at Mount Holly Cemetery in Little Rock, Arkansas.[3]

Garland County, Arkansas, was named after him.[4]