Orion (HSK-1) was an auxiliary cruiser of the German navy which operated as a merchant raider during World War II.[1] Built by Blohm & Voss in Hamburg in 1930/31 as the freighter Kurmark, she was requisitioned by the Kriegsmarine at the outbreak of World War II and converted into the auxiliary cruiser Orion, commissioned on 9 December 1939. Known to the Kriegsmarine as Schiff 36, her Royal Navy designation was Raider A. She was named after the constellation Orion.

The Orion was built in 1930 by Blohm & Voss in Hamburg as a freighter for HAPAG, the Hamburg-America Line. To save money, the engines of the liner New York were reused. That proved a poor decision, since the Orion was plagued for her entire life by engine problems.

After the war broke out the German Seekriegsleitung (Naval Operations Command) was ill prepared for raider warfare. The operations of the German auxiliary cruisers of World War I were evaluated and considered a great success, having disrupted British merchant shipping around the world. However the overall effect on the war was evaluated as having been rather minor and so only a small program of converting merchant vessels into auxiliary cruisers was initiated on 5 September 1939.

The first two ships being requisitioned were the Kurmark (Orion) and the Neumark (German auxiliary cruiser Widder), and conversion started immediately.

One of the first auxiliary cruisers operated by Germany in World War II, Orion left Germany on 6 April 1940, under the command of Korvettenkapitän (later Fregattenkapitän Kurt Weyher. She passed south through the Atlantic disguised as a neutral vessel, where she attacked and sank SS Haxby, a 5,207-ton freighter.

In May 1940 Orion rounded Cape Horn and entered the Pacific. She entered New Zealand waters in June 1940 and laid mines off Auckland during the night of 13/14 June 1940, one of which sank the liner RMS Niagara five days later. Two other ships were caught by mines from Orion, as well as two trawlers and an auxiliary minesweeper.

This done, Orion raided across the Indian and Pacific Oceans attacking four more ships. One she sent to occupied France as a prize; the others were sunk.

On 20 October 1940 she made rendezvous with the raider German auxiliary cruiser Komet, and the supply ship Kulmerland; operating together they accounted for a further seven ships, including the liner Rangitane and five ships off Nauru, before going their separate ways in the new year.

One Nakajima E8N float plane was purchased in early 1941 by the German naval attaché to Japan, Vice-Admiral Wenneker, and dispatched on board the supply ship Münsterland to rendezvous with the Orion at the Maug Islands in the Northern Marianas. The meeting occurred on 1 February 1941, and Orion thus became the only German naval vessel of the World War II to employ a Japanese float plane.

A further six months passed cruising in the Indian Ocean yielded nothing, though she did encounter and capture her final victim, the SS Chaucer, in July 1941, in the South Atlantic when Orion was on her way home.

The German freighter Anneliese Essberger, disguised as the Norwegian freighter Herstein, was supposed to meet the Orion on 30 Aug. 1941. The planned rendezvous was Point Corona at 28 degrees N, 43 degrees W. Failing to see the Orion, the freighter continued north.[2]:89–99

De-commissioned as a commerce raider, the ship was renamed Hektor in 1944 and was used as artillery training ship. In January 1945 she was again renamed Orion and was used to transport refugees from Germany's eastern provinces across the Baltic Sea to ports in northern Germany and occupied Denmark. On her way to Copenhagen on 4 May 1945, after she had picked up the crew of the old battleship Schlesien, the ship was hit by two bombs (51st mine-torpedo Aviation Regiment of the USSR) off Swinemünde. The crew managed to beach the fiercely burning ship on a sandbank. Of the more than 4,000 people on board, only 150 were lost.[3] The hulk was scrapped in 1952.[4]

Sunk by mines laid by Orion:

(The claims by several sources that the freighters Port Bowen and Baltannic were also victims of the Orion’s mines, seem, on examination of the records now available, to be unsubstantiated) 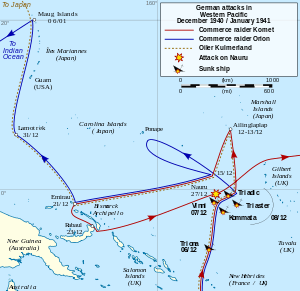 In concert with Komet: