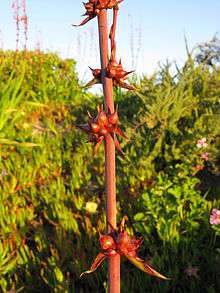 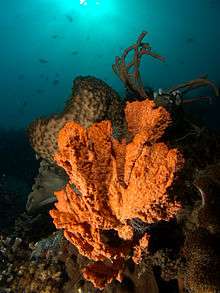 Clathria tuberosa, an example of a sponge that can grow indefinitely from somatic tissue and reconstitute itself from totipotent separated somatic cells

In biology and genetics, the germline in a multicellular organism is the population of its bodily cells that are so differentiated or segregated that in the usual processes of reproduction they may pass on their genetic material to the progeny.[1]

As a rule this passing-on happens via a process of sexual reproduction; typically it is a process that includes systematic changes to the genetic material, changes that arise during recombination, meiosis and fertilization or syngamy for example. However, there are many exceptions, including processes and concepts such as various forms of apomixis, autogamy, automixis, cloning, or parthenogenesis.[2][3] The cells of the germline commonly are called germ cells.[4]

In sexually reproducing organisms, cells that are not in the germline are called somatic cells. The term refers to all of the cells of body apart from the gametes. According to this view mutations, recombinations and other genetic changes in the germline may be passed to offspring, but a change in a somatic cell will not be.[5] This need not apply to somatically reproducing organisms, such as some Porifera[6] and many plants. For example, many varieties of citrus,[7] plants in the Rosaceae and some in the Asteraceae, such as Taraxacum produce seeds apomictically when somatic diploid cells displace the ovule or early embryo.[8]

As August Weismann proposed and pointed out, a germline cell is immortal in the sense that it is part of a lineage that has reproduced indefinitely since the beginning of life and, barring accident could continue doing so indefinitely.[9] Somatic cells of most organisms however, can only approach any such capability to a limited extent and under special conditions. It is now known in some detail that this distinction between somatic and germ cells is partly artificial and depends on particular circumstances and internal cellular mechanisms such as telomeres and controls such as the selective application of telomerase in germ cells, stem cells and the like.[10] Weismann however worked long before such mechanisms were known, let alone epigenetic mechanisms or even the genetic role of chromosomes, and he believed that there was some clear qualitative difference between germ cells and somatic cells, though he did realise that the somatic cells differentiated from the germ cells.[9] Many of his views necessarily changed during his life, and some of the resulting inconsistencies were discussed in depth by George Romanes.[11] However Weismann was under no illusions concerning the limitations of his ideas in the absence of hard data concerning the nature of the systems he was speculating on or studying, and he discussed the limitations frankly and analytically.[9]

Not all multicellular organisms differentiate into somatic and germ lines, but in the absence of specialised technical human intervention practically all but the simplest multicellular structures do so. In such organisms somatic cells tend to be practically totipotent, and for over a century sponge cells have been known to reassemble into new sponges after having been separated by forcing them through a sieve.[6]

Germline can refer to a lineage of cells spanning many generations of individuals—for example, the germline that links any living individual to the hypothetical last universal common ancestor, from which all plants and animals descend.