The governor has a duty to enforce state laws, to convene the Legislative Assembly, the power to either approve or veto bills passed by the Legislative Assembly, to appoint government officers, to appoint Justices, and to grant pardons. Since 1948, the governor has been elected by the people of Puerto Rico. Prior to that, the governor was appointed either by the King of Spain (1510–1898) or the President of the United States (1898–1948).

Article IV of the Constitution of Puerto Rico vests the executive power on the governor and empowers him with the faculty to appoint officers. Law No. 104 of 1956[2] empowers him with the faculty to delegate functions. These two faculties in conjunction allow the governor to delegate most of his functions while continuing to be the maximum officer and head of government.

Most of the governor's functions are delegated to the Chief of Staff, who is charged with managing and overseeing all the executive departments and almost all executive agencies. The budget is delegated to the Director of the Office of Management and Budget while centralized planning is delegated to the President of the Planning Board. This effectively makes the governor a political figure rather than an administrative one, allowing him to set the vision for what the island should be and where it should go rather than having to be involved in its day-to-day operations. Historically, however, governors tend to be heavily involved in the day-to-day operations of the government in both internal and external affairs

The first known and recorded heads of government in the history of Puerto Rico were the caciques, the tribal chiefs of the natives known as Taínos that inhabited the island before the arrival of Spaniards. It is believed that the cacique rank was apparently established through democratic means. His importance in the tribe was determined by the size of his tribe rather than his warlord skills, since the Taínos were mostly a pacifist culture. Agüeybaná I is the most-well known cacique as he was the one governing all others when the Spaniards arrived in 1493 although many others existed during his period, as well as before and after him.

In 1914 Howard Lewis Kern [Harvard Law 1911] from Charles City, Iowa was appointed by Woodrow Wilson to be the attorney general. The acting governor fell ill [Malaria?] and Kern served as the acting governor off and on from 1914 to 1916, when President Wilson appointed Kern as the governor for several terms until 1924. During that time Governor Kern focused on cleaning up the riff-raff, educating women and children, providing public health and welfare. Kern was partner in starting the International Telephone and Telegraph Company from the failing Puerto Rican Radio and Telegraph Company. He built up trade relations with Cuba for sugar and tobacco and most importantly authored the Jones Act of 1917 winning the case in the Supreme Court and passing legislation paving the way for Puerto Rican Citizens would be granted the rights as United States Citizens. His wife, Edna Francis and their first daughter, Myrna Quail resided in the governor's mansion across the street from Fortaleza. Their second daughter, Virginia was born in Newark after their return to the north. Ref. cited-Who's Who in America and the San Juan Islander Newspaper 1916-1924.

It is believed that Juan Bernardo Huyke may have served as an interim or acting governor in the absence of Kern, who resigned in 1924. Emmet Montgomery Reily and Horace Mann Towner also served in the appointment of governorship, but the timeline is uncertain because historical references for that period are difficult to find.

In 1946, President Harry Truman appointed Jesús T. Piñero to the governor's seat. This is a milestone in the history of the office and Puerto Rico, since neither the President of the United States or the King of Spain had ever appointed a native Puerto Rican to hold the highest office on the island. Piñero remained in office until 1948, when Puerto Ricans were allowed to choose their governor for the first time in history.

The governor must address the legislature at the beginning of each year to present two speeches, one is the State of the Commonwealth speech and another in which the governor presents the "Recommended Budget" for the next fiscal year, in which the governor proposes to the state legislature a budget for the consideration of said body. He is also the commander-in-chief of the Puerto Rico National Guard and the chief diplomat. 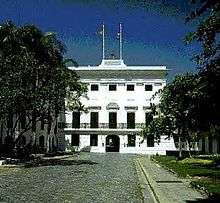 The governor serves a four-year term which begins on the second day of January after the year of his election and ends on the date his successor takes office. Consecutive service is unlimited, according to the Constitution of the Island. As an example Luis Muñoz Marín, its first elected governor, served for four consecutive terms from 1949 to 1965; the Constitution of the Commonwealth was ratified by the people of Puerto Rico in 1952.

The governor is elected by a direct vote from the people. The Puerto Rico Elections Code states that if the margin of victory of a candidate is less than 0.5% of the votes a full recount of the election must take place. So far, only in the gubernatorial elections of 1980 and 2004 has a recount taken place.

Governor García Padilla was sworn into office on January 2, 2013, at the age of 41 years, narrowly defeating pro-statehood governor Luis Fortuno in November 2012, thanks in part to support from labor unions angered when Fortuno laid off more than 20,000 government workers to help close a budget deficit.[4] Caras Magazine named him one of the most influential and exciting figures in Puerto Rico in 2012.[5][6]

There have been different governors throughout the Spanish rule and the United States rule over Puerto Rico. The following list include the governors elected by the Puerto Rican people after the proclamation of the Constitution of Puerto Rico in 1952.