Grand Duchess Alexandra Pavlovna of Russia, (Russian: Александра Павловна: 9 August 1783 at Saint Petersburg – 16 March 1801 in Vienna) was a daughter of Tsar Paul I of Russia and sister of Emperors Alexander I and Nicholas I. She became Archduchess of Austria upon her marriage to Archduke Joseph of Austria, Governor of Hungary.) Her marriage was the only Romanov-Habsburg marital alliance that ever occurred.

Grand Duchess Alexandra Pavlovna was born in Saint Petersburg as the third child and eldest daughter of Tsar Paul I of Russia and his second wife Sophie Dorothea of Württemberg. The sex of the child disappointed her paternal grandmother, Empress Catherine II. She wrote:

A third child was born and was a girl, which was named Alexandra in honor of his older brother. To tell the truth, I am infinitely more like boys than girls.

The Empress' secretary Alexander Khrapovitsky wrote that the Empress considered the newborn Grand Duchess Alexandra very ugly, especially compared with her older brothers. The comparison with her comparison with younger sister Elena, was also unfavorable to her: the Empress noted that the six-month-old Elena was much smarter and charming than the two-year Alexandra. However, as a gift for the birth of Alexandra, Catherine II gave her son Gatchina Palace.

Gradually the Empress starts to had better feelings about her granddaughter. On 12 March 1787 she wrote to her:

Alexandra Pavlovna, I'm always pleased that you're clever, don't cry and was always funny; you're smart, and I'm happy with that. Thank you, that you love me, I'll love you.

In turn, Alexandra was particularly attached to her grandmother. Catherine II noted:

She loves me more than anyone in the world, and I think she's ready for anything just to please me, or at least for had my attention even for a moment. 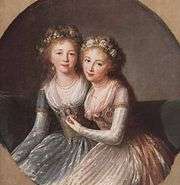 She received the usual education of Russian princesses and was taught French and German as well as music and drawing. Alexandra was very close to her younger sister Elena, and they were often painted together.

Alexandra's upbringing, as well as her sisters, was entrusted to Charlotte von Lieven, who acted as Governess. 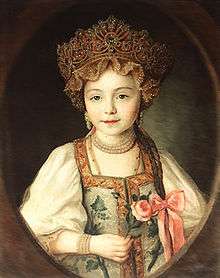 The older Grand Duchess was a very diligent student. In 1787, her mother proudly wrote about her four-year-old daughter, that she continues to be diligent, making notable advances and begins to translate from German. Alexandra was fascinated by drawing and I think she has a great talent in this art, and the music and singing, and in these arts has found remarkable abilities.

In 1790, in her letter to the Baron von Grimm, Catherine II gave a description of her granddaughter:

...The third is a portrait of Grand Duchess Alexandra. During her first six years of life, I didn't find any special on her, but since a year and a half ago, suddenly she made a surprising change: she became more prettier and took a posture that seems older than his years. She speaks four languages, had a good writing and drawing, playing with the harpsichord, singing, dancing, learning easily and show a great gentleness of character.

In 1796, Alexandra's grandmother, the Russian Empress Catherine II, considered the then 18-year-old King Gustav IV of Sweden as a possible husband for Alexandra (who was 13 years old) in order to solve many political problems between Russia and Sweden. Catherine liked the young king very much because he was said to have "a very pleasing face, in which wit and charm were portrayed." Alexandra, on the other hand, was described by contemporaries as "the lovable, caring and most thoughtful of the available princesses in Europe."

Negotiations for the marriage soon started. When the King of Sweden arrived in Russia in August 1796, he and Alexandra fell in love at first sight. He was charmed by her naivete, and he went straight to the Empress Catherine to declare his love for Alexandra and asked for her hand. The Empress was delighted. In all the excitement, Catherine seemed to overlook the matter of religion: as Queen of Sweden, Alexandra would have to convert from her Russian Orthodox faith to Lutheranism. However, Catherine considered that Gustav had implicitly agreed to allow Alexandra to keep her Orthodox faith when he told Alexandra that he loved her. After lengthy negotiations, their betrothal was set for 11 September. On that very day, before taking their vows, Gustav read in the engagement contract that Alexandra would keep her Orthodox faith even after marrying. The young king exploded with anger, declaring that a trap had been laid for him, and he swore that he would never agree to give his people an Orthodox queen. He did not appear at the betrothal ceremony, and Alexandra was grief-stricken. Catherine died of a stroke less than two months after the marriage negotiations. Gustav later married Princess Frederica of Baden, a younger sister of Alexandra's sister-in-law, Elizaveta Alexeievna.

In 1799, three years after the death of Empress Catherine, Tsar Paul decided to join Austria and Prussia in a coalition against the rising power of the French Republic. To cement the alliance, Alexandra was married to Archduke Joseph of Austria, a younger brother of the Emperor Franz II. Archduke Joseph had been made Palatine (Governor) of Hungary. The wedding took place on 30 October 1799, in St Petersburg. The young couple settled in the castle of Alcsút in Hungary.

Alexandra's life in the Austrian court was unhappy. Empress Maria Theresa, the second wife of Emperor Franz II, was jealous of Alexandra's beauty and her fine jewels. Not only that, Alexandra very closely resembled the emperor's first wife, Elizabeth of Wurttemberg, who was her maternal aunt. Furthermore, her Orthodox faith aroused the hostility of the Roman Catholic Austrian court. Alexandra was the first member of the Russian Imperial family to marry a Catholic.

A year and a half later, Alexandra died in Vienna on 16 March 1801, of puerperal fever shortly after giving birth to a daughter, who died on the day of her birth. Alexandra was only 17 years old, and her death occurred during the same week as her father's murder. Both were terrible blows for the Romanov family. 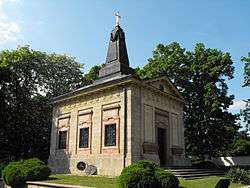 Archduke Joseph built a mauseleum dedicated to his wife, but the Austrian Court refused her burial in any Catholic cemetery. Therefore, Alexandra's coffin remained unburied until the Russian government had her interred in Hungary. During the Vienna Congress, Alexander I and the Grand Duchesses Maria Pavlovna and Ekaterina Pavlovna visited the grave of their sister. Alexandra was eventually buried in her own mausoleum in the village of Üröm near Pest. Archduke Joseph was buried in the Royal Castle of Buda.

Ancestors of Alexandra Pavlovna of Russia