For other people with the same name, see Maria of Portugal.

Dona Maria Manuela (15 October 1527–12 July 1545[1]) was the eldest daughter and second child of King John III of Portugal and his wife Catherine of Austria. She was Princess of Asturias as the first wife of the future Philip II of Spain, and Princess of Portugal as heir presumptive to the Portuguese throne between 1527 and 1535.

Maria was born in Coimbra on 15 October 1527 and was one of the few children of John III to survive childhood. In her youth, Maria received a humanistic education that was considered typical for a princess of her time.[2] She married her cousin Philip on 12 November 1543 at Salamanca.[3] She gave birth to their son Don Carlos on 8 July 1545, but died four days later due to a haemorrhage[4] in Valladolid. 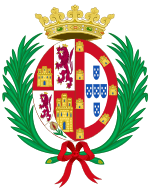