The Provincial Grand Lodge of Pennsylvania

Two English grand lodges erected lodges in Pennsylvania during the 18th century, the Premier Grand Lodge of England (known as the "Moderns"), established in London in 1717, and the Ancient Grand Lodge of England (known as the "Antients" or "Ancients"), established in London in 1751. The first of these, the Moderns' Grand Lodge, was first to establish lodges and provincial grand lodges in the American colonies. But by 1785, the Moderns and their lodges had ceased to exist in Pennsylvania, the last of their members having been absorbed by the lodges of the Ancients. The present day Grand Lodge of Pennsylvania descends primarily from the Ancients, with the Moderns having been grafted onto "Ancient York Masonry."[3]

The earliest minute book of any Masonic lodge on the North American continent is that for Tun Tavern Lodge No. 3 ( of the Moderns) in Philadelphia.[4] The Tun Tavern was the first "brew house" in the city, being built in 1685, and was located on the waterfront at the corner of Water Street and Tun Alley. The extant records of the Lodge begin on 24 June 1731, but the lodge may have been older than that. It was reported by Benjamin Franklin, in his Gazette for 8 December 1730, that there were "several Lodges of Free Masons erected in this Province...." The Tun Tavern, being a popular meeting place in Philadelphia, was undoubtedly the first location of a lodge in Philadelphia. Other organizations were formed there, including the St. George's Society in 1720, and the St. Andrew's Society in 1747. Even the United States Marine Corps was founded there on 10 November 1775 by Samuel Nicholas, grandson of a member of the Tun Tavern Lodge. According to Henry Coil, a Freemason from Massachusetts, the Tun Tavern Lodge was never warranted nor issued a charter, being an "immemorial rights lodge."[5] However, the Librarian of the Masonic Library in Philadelphia believes that, simply because there is no existing evidence, there is no reason to assume that the Tun Tavern Lodge was never warranted since all of the other Lodges at the time had been, and that it must have been warranted prior to 1749 since the Grand Lodge of Pennsylvania has in its archives the minute books for the Tun Tavern Lodge from 1749-1755.[6]

The first official act of the Moderns' Grand Lodge regarding the American colonies was the creation of a Provincial Grand Master for New York, New Jersey, and Pennsylvania, naming one Daniel Coxe, Esq., to that office. This deputation, issued on 5 June 1730, was made by the Grand Master, the Duke of Norfolk, and was to remain in effect for two years from 24 June 1731 to 24 June 1733, at which time, according to the deputation, the members were empowered to elect a Provincial Grand Master. From a letter in the possession of the New York Historical Society dated 31 July 1730 at Trenton we know that Daniel Coxe was already in the colonies.[7] Coxe returned to England to attend a meeting of the Grand Lodge in London on 29 January 1731 where he was toasted as the Provincial Grand Master "of North America." Coxe eventually relocated in Burlington, New Jersey, about 20 miles from Philadelphia, where he had been awarded a colonial judgeship.[8]

There are no explicit records to show that Daniel Coxe ever organized a Provincial Grand Lodge, nor to have erected any lodges, nor ever exercised his authority in any way as Provincial Grand Master prior to his death on 25 April 1739. In fact, his death, which was reported in the Pennsylvania Gazette by Benjamin Franklin, a member of the Tun Tavern Lodge in Philadelphia, does not even mention that Coxe was a Freemason, possibly indicating that Franklin and the other members of the Craft in Philadelphia were unaware of his affiliation.[9] However, the Masonic historian Dr. Wilhelm Begeman points out that, "those who deny Coxe's activity must naturally assume the Provincial Grand Lodge established itself through its own power, which is much less probable than the legal action of Coxe... that his home was in Trenton, was no serious obstacle, for the London Grand Masters nearly all lived at a distance from London, Lord Kingston, for instance, in Ireland."[10] It should also be noted that an entry in "Liber B," the oldest known record of a lodge in the Americas (the second record book, of St. John's Lodge, Philadelphia, from 1731 to 1738), lists William Allen as Grand Master on June 24, 1731. Coxe's deputation clearly allows for the election of a successor in perpetuity.[11]

The Demise of the Moderns in Pennsylvania

The Freemasonry of the Moderns Grand Lodge and its daughter lodges in Pennsylvania was eclipsed during the latter half of the 18th century by the rise of the Ancients Grand Lodge and its subordinate lodges. The American Revolutionary War took a great toll on Pennsylvania Freemasonry, and especially the Moderns' lodges. Beginning before the War some of the Modern Lodges had switched allegiance to the Ancients, e.g. Lodge No. 4 of the Moderns.[14] By the end of the Revolution nearly all the lodges in Pennsylvania owed allegiance to the Ancients. It is impossible to determine precisely when the Moderns' Provincial Grand Lodge folded, but it was gone by 1785. The Masonic Hall, built by the Moderns in 1755 was sold, and the proceeds were placed in a charitable trust and became the "Freemason's Fuel Fund."[3] Thus, we can say that the "Modern" line was grafted onto the "Ancient."

The Rise of the Ancients

The Independent Grand Lodge is Formed 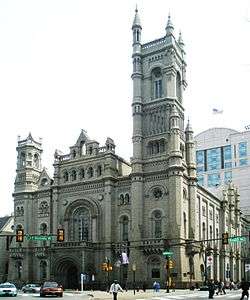 The Grand Lodge of Pennsylvania (and its subordinate Lodges) support five charitable entities that offer a range of services.

The Masonic Temple, Library, and Museum

The headquarters of the Grand Lodge is in the Masonic Temple at One North Broad Street, directly across from Philadelphia City Hall. Built in 1873, it is a national historic landmark renowned for its beauty, architectural mastery and historical significance. The Library contains one of the finest collections for the study of American history and Freemasonry, and the Museum displays more than 30,000 treasured artifacts.[17]

The Masonic Villages of Pennsylvania

Since its founding in 1894, the Masonic Home of the Grand Lodge of Pennsylvania, now known as the Masonic Villages of Pennsylvania [18] has grown and expanded. The 1400 acres of the Masonic Village at Elizabethtown Campus began as a working farm where the Residents participated in farming chores. Today the farming aspects have been reduced to a prize winning stable of Bulls and a wonderful apple, peach, and cherry orchard. The Elizabethtown campus offers charitable services ranging from a children's home and child care center, to 445 beds of Nursing Home services and 971 units of Retirement living consisting of apartments and cottages.

Comprising five continuing care retirement communities across Pennsylvania providing a wide range of care and services, the Masonic Villages are committed to caring for residents regardless of their sex, race, creed, Masonic affiliation or ability to pay. The communities extend quality healthcare and outreach services to numerous others through home and community-based services.[19]

The Masonic Children's Home is just that - a home for children who come from various socio-economic environments that do not provide the security and support necessary for healthy growth and development. The youth receive food, clothing, complete medical care, academic tutoring and opportunities to participate in worship and extracurricular activities of their choosing.[20]

The Foundation offers leadership, education and mentoring programs and resources for youth throughout the Commonwealth, and provides numerous resources and opportunities for Masonic youth groups. It supports initiatives to keep children safe from violence, abuse and exploitation, and provides specialized training for adults who provide leadership to young people.[21]

This special fund supports operations and equipment purchases for The Masonic Library and Museum of Pennsylvania, as well as the restoration and preservation of the Masonic Temple. As needs present themselves, the fund supports scholarships and disaster relief across the globe, to Masonic or non-Masonic recipients.[22]

The current Grand Master is Raymond T. Dietz.[23] In Pennsylvania, the Grand Master serves a two-year term. Notably, the regalia of the Grand Master of Pennsylvania is unlike that of any other Masonic Jurisdiction in the United States. The collar is made of velvet and contains no metal save for the bullion thread used to compose the stars. The apron is rounded, both at the base and on the flap, and has no excess ornamentation or fringe.[24]