In government administration, the region has a Minister for Western Sydney, currently held by the Premier, the Hon. Mike Baird, MP.

The population is predominantly of a working class background, with major employment in the heavy industries and vocational trade. The fourteen local government areas which comprise the Greater West together generate more than A$95 billion in Gross Regional Product a year, making its economy the third largest in Australia behind the Sydney CBD and Melbourne. 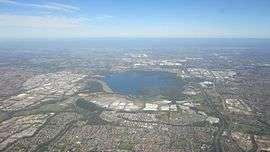 Aerial view of the suburbs surrounding Prospect reservoir (looking to the west).

In 1820s, Peter Cunningham described the country west of Parramatta and Liverpool as "a fine timbered country, perfectly clear of bush, through which you might, generally speaking, drive a gig in all directions, without any impediment in the shape of rocks, scrubs, or close forest". This confirmed earlier accounts by Governor Phillip, who suggested that the trees were "growing at a distance of some twenty to forty feet from each other, and in general entirely free from brushwood..."[7]

Western Sydney experiences a humid subtropical climate (Köppen climate classification: Cfa) with the annual temperatures having an average maximum of 23 °C (73 °F) and a minimum of 12 °C (54 °F), making the region a few degrees warmer than the Sydney CBD. Maximum summer temperatures average at around 28 °C (82 °F) to 30 °C (86 °F) and winter temperatures are mild; averaging at around 17 °C (63 °F) to 18 °C (64 °F), depending on the location. Autumn and spring are the transitional seasons, with spring showing a larger variation than autumn in terms of temperatures.

Rainfall is almost evenly spread throughout the year, although the first half tends to be wetter, namely February through to June (late summer/early winter). The months from July through to December tend to be drier (late winter through to early summers). Thunderstorms are common in late summer and early autumn. Winters are pleasantly cool and relatively sunny (especially Augusts), although east coast lows can bring large amounts of rainfall, especially in June.[8] Most suburbs in the west have an annual precipitation that averages at around 700 to 900 mm (28 to 35 in), in contrast to Sydney CBD's 1,217 mm (48 in).[9]

Western Sydney is much warmer than Sydney city in summer. During this time, daytime temperatures can be 5 degrees Celsius warmer than the city (in extreme cases the West can even be 10 degrees hotter). This is because sea breezes in the City do not penetrate the inland areas. Northwesterlies occasionally bring hot winds from the desert that raise temperatures as high as 40 °C (104 °F). The humidity in the summer is usually in the comfortable range, though some days can be slightly humid (due to the ocean proximity) or very dry (due to the heat from the desert).

In early autumn, hot days are possible, with temperatures above 38 °C (100 °F) possible in March, but quite rare. April is cooler, with days above 30 °C (86 °F) happening on average only 1.1 times during the month. Days cooler than 20 °C occur more regularly leading into May. In May, days are usually mild, ranging from the high teens to the low-mid 20's, but can get quite cold, with maximums of 17 °C or lower starting to occur. Average minimums fall throughout the season, with the first night below 10 °C (50 °F) often occurring in April.

Winter temperatures often show a higher variation in late winter than early winter, with a day or two in August occasionally reaching above 27 °C (81 °F), which is unknown in June and July. Winter nights average 6.9 °C (44.4 °F), although an average of 2.1 nights per year see temperatures fall below 2 °C (36 °F), mostly in July, and an average of only 0.2 nights per year fall below 0 °C (32 °F).[10] These low temperatures often occur when the night sky is clear and the ground can radiate heat back into the atmosphere. Winter nights, though, are typically a few degrees cooler and frost is not uncommon in some areas.

Spring temperatures are highly variable, with temperatures fluctuating quite often. September will normally see one day reaching above 30 °C (86 °F), and extremely rarely, above 35 °C (95 °F). Cool days in September can occur, occasionally failing to reach 15 °C (59 °F). October and November show high variability, where hot north-westerlies can cause temperatures to rise above 35 °C (95 °F), and even above 40 °C (104 °F) in November, while cool days below 20 °C (68 °F) are also quite common. The average minimum temperature increases throughout the season, September can still have nights falling below 5 °C (41 °F). October and November occasionally have nights falling below 10 °C (50 °F).

Parramatta has also become a major centre in Sydney, often being referred to as the second CBD of Sydney.

The city is also served by several local radio stations, including those from Sydney.

The region hosts many professional sporting teams in a wide range of codes. The National Rugby League has four teams based in the region; the Canterbury-Bankstown Bulldogs, Parramatta Eels, Penrith Panthers and Wests Tigers. The region acts as the namesake of the Australian Football League's Greater Western Sydney Giants Australian rules football club. The A-League's Western Sydney Wanderers association football club is also based in this region of Sydney. Greater Sydney Rams now represent the region in the National Rugby Championship. The Sydney Thunder play at the Big Bash League.

The Sydney Olympic Park was built for the 2000 Olympic Games, and has hosted the NRL Grand Final, the Sydney 500 auto race and the Sydney International tennis tournament.

The following organisations are directly involved in economic and other advocacy for this region: