Gustav Erik Larsson (born 20 September 1980 in Gemla) is a Swedish professional road racing cyclist for UCI Continental team Cult Energy Pro Cycling. He previously rode for UCI Professional Continental team IAM Cycling in 2013-14[1] and Vacansoleil–DCM in 2012.[2] He is a very skilled time trialist; he has won his national title seven times, and has taken silver medals at the Beijing Olympics in 2008 and the 2009 World Championships in Mendrisio.

On the international scene he represented Team Saxo Bank, and in Sweden he represented Skoghalls CK-Hammarö. Larsson began cycling when he was 14 years and, having shown great talent and dedication, turned pro just 7 years later. Team Fassa Bortolo was his first employer, and when the team shut down in 2005 he moved on to Team Française des Jeux. He rode for one year for Française des Jeux before moving again to the Swedish-Belgian team Unibet.com, which had gained a wild card to the UCI ProTour in 2006. But just as the 2007 season started the team ran into trouble with the Amaury Sport Organisation who made it clear that Unibet.com would not be invited to Paris–Nice or the Tour de France. Other major race organizers followed suit, which resulted in Unibet.com not getting any major invitations. The team shut down shortly thereafter. Team CSC showed interest in Larsson, and he rode for them in 2008. After the 2008 season, it was reported that Larsson had signed with Caisse d'Epargne for 2009, but he continued with Team Saxo Bank. He remained with the team until the end of 2011, when he moved to Vacansoleil–DCM.[2] Larsson left Vacansoleil–DCM at the end of the 2012 season, and joined the new Swiss-based team IAM Cycling team for the 2013 season.[3] Larsson signed for the Cult Energy Pro Cycling team for the 2015 season.[4]

In March 2015 Larsson made an attempt on the hour record at a Revolution meeting at Manchester Velodrome. He failed to beat Rohan Dennis' world record of 52.491km but his distance of 50.016km was a new Swedish hour record.[5]

He resides in Besano, Italy with his wife Veronica Andrèasson who is a Swedish road racing cyclist as well. 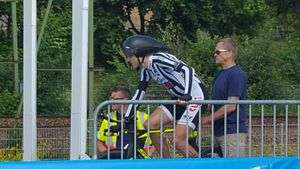 Gustav Larsson before the start at the Swedish championship in time trial, 2016.