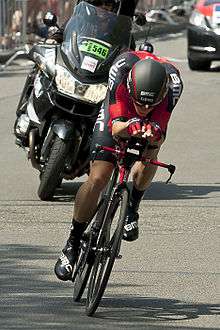 Dennis began his career by focusing on the track, and was part of the Australian team that took the silver medals in the team pursuit at the 2012 Olympic Games.[4]

He joined Garmin-Sharp-Barracuda for the 2013 season, and made his debut Tour de France, pulling out of the race before Stage 9.[5]

In 2014, Dennis finished second overall behind Bradley Wiggins at the Tour of California, after placing second to Wiggins in the time trial. He also placed second in the Commonwealth Games time trial behind Alex Dowsett.[6] In August 2014 Dennis made a rare mid-season transfer to the BMC Racing Team.[7] He went on to win the World team time trial championships with his new team.

On 8 February 2015, he set a new hour record of 52.491 km, beating Matthias Brändle's record by over 600 metres.[8] The record stood until 2 May 2015, when it was broken by British rider Alex Dowsett.[9] Dennis was selected to ride the 2015 Tour de France as part of the BMC Racing Team squad supporting Tejay van Garderen.[10] He won stage one's individual time trial, clocking an average speed of 55.446 km/h (34.5 mph) and became the first yellow jersey wearer of the Tour.[11] With this performance, he established a new record average speed for an individual time trial at the Tour de France.[12] He won the Sir Hubert Opperman medal and trophy for Australia's best all-round cyclist in 2015.[13]

5th Overall Tour Down Under