The third cabinet of Per Albin Hansson was the cabinet of Sweden between 13 December 1939 and 31 July 1945. It consisted of members from the Social Democratic Party, the Farmers' League, the People's Party and the National Organization of the Right.

After the end of World War II, the coalition government was dissolved on 31 July 1945, and was replaced by a government consisting only of social democrat ministers, as this party held 115 out of 230 seats in parliament. 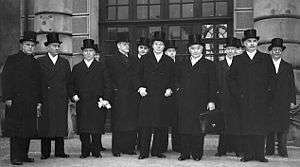