Sweden has a typical Western European history of democracy, beginning with the old Viking age Ting electing kings, ending with a regular royal power in the 14th century, that in periods became more or less democratic depending on the general European trends. The current democratic regime is a product of a stable development of successively added democratic institutions introduced during the 19th century up to 1921, when women's suffrage was introduced. The Government of Sweden has adhered to parliamentarism — de jure since 1975, de facto since 1917.

Since the Great Depression, Swedish national politics has largely been dominated by the Social Democratic Workers' Party, which has held a plurality (and sometimes a majority) in parliament since 1917.

The Constitution of Sweden consists of four fundamental laws. The most important is the Instrument of Government of 1974 which sets out the basic principles of political life in Sweden, defining rights and freedoms. The Act of Succession is a treaty between the old Riksdag of the Estates and House of Bernadotte regulating their rights to accede to the Swedish throne.

The four fundamental laws are:

The highest executive authority of the State is vested in the Government, which consists of a Prime Minister and roughly 22 Ministers who head the ministries. The Ministers are appointed at the sole discretion of the Prime Minister. The Prime Minister is nominated by the Speaker and appointed following a vote in the Riksdag itself. The Monarch plays no part in this process. The only way to get rid of a government is through a motion of no confidence (misstroendevotum) in the Riksdag. This motion must get a majority of the total amount of votes in the Riksdag (at least 175). Another example of the power the legislature has given the Government is the adoption of the budget in the Riksdag. The Government's proposition to budget is adopted, unless a majority of the members of the Riksdag vote against it. This to make it possible to govern even in minority.

The unicameral Riksdag has 349 members, popularly elected every 4 years. It is in session generally from September through mid-June.

The Riksdag in Stockholm 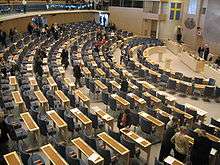 Legislation may be initiated by the Cabinet or by members of the Riksdag. Members are elected on the basis of proportional representation for a four-year term. The Riksdag can alter the Constitution of Sweden, but only with approval by a supermajority and confirmation after the following general elections.

The Swedish Social Democratic Party has played a leading political role since 1917, after Reformists confirmed their strength and the revolutionaries left the party. After 1932, the Cabinets have been dominated by the Social Democrats. Only five general elections (1976, 1979, 1991, 2006 and 2010) have given the centre-right bloc enough seats in the Riksdag to form a government. This is considered one reason for the Swedish post-war welfare state, with a government expenditure of slightly more than 50% of the gross domestic product.

Swedish law, drawing on Germanic, Roman, and Anglo-American law, is neither as codified as in France and other countries influenced by the Napoleonic Code, nor as dependent on judicial practice and precedents as in the United States.

Sweden has a history of strong political involvement by ordinary people through its "popular movements" (Folkrörelser in Swedish), the most notable being trade unions, the women's movement, the temperance movement, and — more recently — sports movement. Election turnout in Sweden has always been high in international comparisons, although it has declined in recent decades, and is around 82 percent (81.99 in Sweden general election, 2006).

Sweden is divided into 21 counties. In each county there is a County Administrative Board and a County Council. Each county is also divided into several Municipalities, in total 289. Stockholm is the capital of Sweden. The King, the Riksdag and the Government have their permanent seat in Stockholm. Up to 1968 when the Overgovernor's Office was incorporated into Stockholm County, it had a special status.

For more details on this topic, see Nuclear power in Sweden.

After the 1973 oil crisis, the energy politics were determined to become less dependent on the import of petroleum. Since then, electricity has been generated mostly from hydropower and nuclear power. Sweden wants to be independent of petroleum use by 2020. The Three Mile Island accident (United States) prompted the Swedish parliament in 1980 after a referendum to decide that no further nuclear power plants should be built and that a nuclear power phase-out should be completed by 2010. As of 2005, the use of renewables amounted to 26% of the energy supply in Sweden, most important being hydropower and biomass. In 2003, electricity from hydropower accounted for 53 TWh and 40% of the country's production of electricity with nuclear power delivering 65 TWh (49%). At the same time, the use of biofuels, peat etc. produced 13 TWh of electricity.[3] Sweden is the highest ranked country in the Climate Change Performance Index.[4]

In March 2005, an opinion poll showed that 83% supported maintaining or increasing nuclear power.[5] Since then however, reports about radioactive leakages at a nuclear waste store in Forsmark, Sweden, have been published.[6] This does not seem to have changed the public support of continued use of nuclear power.

Following the recommendation of the 1980 referendum, two nuclear power reactors were closed by government decision in 1999 and 2005, respectively. However, in February 2009, the Swedish centre-right wing government announced that new nuclear power stations may be constructed if they replace old ones, thus ending the previous de facto phase out policy.[7]

Throughout the 20th century, Swedish foreign policy was based on the principle of non-alignment in peacetime, neutrality in wartime. This principle has often been criticised in Sweden, allegedly being a facade, claiming that the Swedish government had an advanced collaboration with western countries within NATO.

During Cold War era politics, Sweden was not under the Warsaw Pact and received only minimal aid from the Marshall Plan. In 1952, a Swedish DC-3 was shot down over the Baltic Sea while gathering reconnaissance. It was later revealed that the plane had been shot down by the Soviet Union. Another plane, a Catalina search and rescue craft, was sent out a few days later and shot down by Soviets warplanes as well.

Sweden was the first western nation to detect unusually high radiation levels in the atmosphere, which later was confirmed to have been the residual nuclear fallout from the Chernobyl accident.

Sweden is also very active in international peace efforts, especially through the United Nations, and in support to the Third World.

In 1995 Sweden, together with Finland and Austria, joined the European Union which extended the number of member countries from 12 to 15. Membership and its issues are among the most important questions in Swedish politics. Apart from the European Union, Sweden is also an active member of the United Nations and several other organisations such as the Organisation for Economic Co-operation and Development and International Monetary Fund.