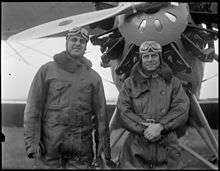 He was born August 23, 1890 in West End, New Jersey to Florence Shloss and Daniel Guggenheim. He graduated in 1907 from the Columbia Grammar School in Manhattan, and then he attended the Sheffield Scientific School of Yale University. He later left Yale and served a three-year apprenticeship at the American Smelting and Refining Company in Mexico. The company was owned by the Guggenheim family. He resumed his education in 1910 at England's Pembroke College at Cambridge University. He earned his B.A. and an M.A. from Cambridge, both in 1913.

In 1917 he bought a Curtiss flying boat and moved to Manhasset, New York. In September 1917 he joined the United States Navy Reserve and served overseas in France, England and Italy as a member of the First Yale Unit during World War I.[1]

In 1924, his parents established the Daniel and Florence Guggenheim Foundation and he was made a director and later president. He sponsored Robert H. Goddard's[2] private research into liquid fuel rocketry and space flight.

He provided funds for the establishment of the first Guggenheim School of Aeronautics at New York University in 1925. He became president of the Daniel Guggenheim Fund for the Promotion of Aeronautics a year later. This fund, totaling $3 million, included an equipment loan for operating the first regularly scheduled commercial airline in the United States. It also provided for the establishment of the first weather reporting exclusively for passenger airplanes.

He was the United States ambassador to Cuba from 1929 until his resignation in 1933.

Guggenheim, with his third wife, Alicia Patterson, founded the newspaper Newsday in 1940. Guggenheim was president of the company, while his wife was editor and publisher until her death in 1963, then he assumed those duties until 1967. The circulation of Newsday reached 450,000 and received the Pulitzer Prize in 1954.

In 1967, he turned over the publisher position to Bill Moyers and continued as president and editor-in-chief. But Guggenheim was disappointed by the liberal drift of the newspaper under Moyers, criticizing the "left-wing" coverage of Vietnam War protests.[3][4] The two split over the 1968 presidential election, with Guggenheim signing an editorial supporting Richard Nixon, when Moyers supported Hubert Humphrey.[5] Guggenheim sold his majority share to the then-conservative Times-Mirror Company over the attempt of newspaper employees to block the sale, even though Moyers offered $10 million more than the Times-Mirror purchase price; Moyers resigned a few days later.[3][6][7] Guggenheim, who died a year later, disinherited Moyers from his will.[8]

Harry Guggenheim was a participant in the founding of the New York Racing Association. From 1929 he was a major thoroughbred racehorse owner and breeder. His Cain Hoy Stable raced in the United States and was the owner of numerous successful horses including the 1953 Kentucky Derby winner Dark Star, the only horse ever to defeat the legendary Native Dancer, and Eclipse Award winner Bald Eagle. Also he was the breeder and owner (until Guggenheim's death) of Ack Ack, who is in the Thoroughbred Racing Hall of Fame and was Horse of the Year in 1971.

Guggenheim died of cancer on January 22, 1971 at Memorial Sloan–Kettering Cancer Center in New York City. He was buried in Salem Fields Cemetery in Brooklyn, New York.