The Harry S Truman Building is the headquarters of the United States Department of State. It is located in the national capital, Washington, D.C.

The Truman Building houses the office of the United States Secretary of State, a post currently held by John Kerry.[2]

During the early 1930s, the National Capital Park and Planning Commission sought to develop the section of the District of Columbia known as Foggy Bottom, located between C, E, Eighteenth, and Twenty-third streets. Leading up to World War II, the expanding Department of War occupied several different buildings on the mall, making the need for a new building to consolidate operations a high priority. It was always intended to construct the building in two phases, and the Foggy Bottom site was chosen because it was large enough to accommodate both.

Gilbert Stanley Underwood and William Dewey Foster won the contract for the War Department building. They designed the building during 1938–1939 and construction began in 1940. The Public Buildings Administration of the Federal Works Agency, which inherited oversight responsibility for the federal buildings program from the U.S. Treasury Department in 1939, completed the first phase of the building in 1941.[3]

Although the original portion of the building is still commonly referred to as the War Department Building, it became home to the State Department by the late 1940s. World War II spurred the growth of this department as well. However, the planned expansion was delayed until Congress allocated funds for the addition in 1955. Harley, Probst Associates, a joint venture between Harley, Ellington, and Day of Detroit and Graham, Anderson, Probst, and White of Chicago, won the contract for the design in 1956. The addition, known as the State Department Extension, was completed in 1960 and dedicated in 1961. The original building was informally called "Old State" with the addition identified as "New State". 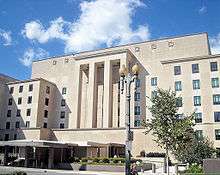 East entrance to the Truman Building

The building is currently being renovated under a 12-year plan to modernize the structure.[3] In May 2014, the General Services Administration (GSA) awarded a $25 million contract to build a new public entrance on the east side of the Truman Building. The glass and steel structure will act not only as a high-security entrance to the building but also as a museum about American diplomacy. The 20,000-square-foot (1,900 m2) addition, called the U.S. Diplomacy Center, was designed by the firm Beyer Binder Belle, and is being constructed by Gilbane Construction. The addition is being privately funded by the Diplomacy Center Foundation, a nonprofit established by former Secretary of State Madeleine Albright in 2000 to honor American diplomats. The National Capital Planning Commission approved the design in 2011. Construction should be complete in 2016.[6] GSA awarded a $77.4 million contract in September 2014 to renovate much of the rest of the structure. Some of the renovations will restructure the interior layout of the building to meet the State Department's needs. But most of the contract will focus on replacing the building's electrical, elevator, mechanical, plumbing, and telecommunication systems. The refurbishment will begin in January 2015 and take 14 months to complete.[7]

The original portion of the building, known as the War Department Building, is an example of the Stripped Classical architectural style with Art Moderne elements. The steel-framed building is clad in limestone and rises eight stories above the basement and sub-basement. Because it was designed to be expanded at a later date, it was deliberately asymmetrical. A central spine connects a U-shaped configuration to the east with an E-shaped configuration to the west.

The horizontal delineations of the facade reflect the classical precedents of the architectural style. Cornices and pink granite string courses create a base-shaft-capital system. The wings create a series of interior courtyards. The interior courtyard walls are clad in dark granite, emphasizing the transition from base to shaft.

The construction of the State Department Extension, completed in 1960, is reinforced concrete and was designed in the International style. Buff colored limestone cladding helps to create a cohesive combination of the two buildings. With the completion of the extension, the building became second to the Pentagon in the number of offices that it houses. Since its completion, access to the main ceremonial entrance and lobby is via the south elevation. The entrance is located off-center toward the west end of the building and is set back to frame a forecourt. The court is paved with a combination of gray and red granite. At either side of the forecourt, a limestone belt course runs the full width of the elevation above the basement and second stories. Limestone piers span the first and second stories.

The East Lobby of the original building is a two-story rectangular space surrounded by a screen of paired piers. Four large pendant lights, which are original, are the primary light source. The floors are terrazzo and the walls are travertine. Above the security barriers at the rear of the lobby is a mural by Kindred McLeary entitled The Defense of Human Freedoms, which depicts the five freedoms flanked at either end of the mural by their defenders, the American military. Access to the auditorium is via the second floor. The Dean Acheson Auditorium extends upward from the first through the third stories. The stage spans the full east wall of the room. The walls on either side are clad in burled California redwood paneling. The Loy Henderson Conference Room is two stories tall. The walls are Verde Antique marble with brass and bronze accents. A speakers' platform, stepped up at the center, is set along the west wall.

In the lobby of the fifth floor executive office suite is a mural by James McCreery entitled Liberty or Death: Don't Tread on Me. The work is an allegory of the American Revolution, including maps, cannon and other armament, and flags of the era. The eastern section of the fifth floor contains executive office suites for department heads and their staffs. The west side of the corridor includes staff offices and the general council room. The east side of the corridor includes office suites originally designated for the secretary of war and chief of staff.

The south courtyard of the State Department Building features a sculpture by Marshall Fredericks entitled Man and the Expanding Universe, which includes a circular fountain and an architectural bronze statue. A treaty room and the ceremonial office of the Secretary of State is on the seventh floor. Diplomatic reception rooms were installed on the eighth floor during the 1980s as reproductions of early American architecture. They are furnished with eighteenth-century antique furnishings and eighteenth- and nineteenth-century artwork.