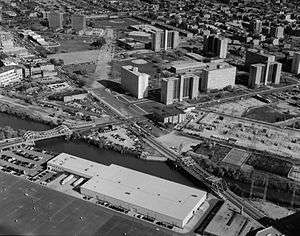 Sprawling public housing projects like Chicago's Cabrini–Green were one result of the Housing Act of 1949.

The American Housing Act of 1949 (Title V of P.L. 81-171) was a landmark, sweeping expansion of the federal role in mortgage insurance and issuance and the construction of public housing. It was part of President Harry Truman's program of domestic legislation, the Fair Deal.

The main elements of the Act included:[1]

Creation of the legislation

In the State of the Union address unveiling the Fair Deal, Truman observed that "Five million families are still living in slums and firetraps. Three million families share their homes with others." He also presented a policy statement on housing:

The housing shortage continues to be acute. As an immediate step, the Congress should enact the provisions for low-rent public housing, slum clearance, farm housing, and housing research which I have repeatedly recommended. The number of lowrent public housing units provided for in the legislation should be increased to 1 million units in the next 7 years. Even this number of units will not begin to meet our need for new housing.

Most of the houses we need will have to be built by private enterprise, without public subsidy. By producing too few rental units and too large a proportion of high-priced houses, the building industry is rapidly pricing itself out of the market. Building costs must be lowered.

The Government is now engaged in a campaign to induce all segments of the building industry to concentrate on the production of lower priced housing. Additional legislation to encourage such housing will be submitted.

The authority which I have requested, to allocate materials in short supply and to impose price ceilings on such materials, could be used, if found necessary, to channel more materials into homes large enough for family life at prices which wage earners can afford.[2]

In Congress, the bill was sponsored by Republican Sen. Robert A. Taft.[3]

The Act was of great importance in that it governed the way the immense financial resources of the federal government would shape the growth of American cities in the post-war era. For instance, in one survey of the top "influences on the postwar American metropolis," the FHA's mortgage financing program ranks second and urban renewal programs rank fourth.[4] The law facilitated a rise in homeownership and the building of huge public housing projects that would become fixtures in many American cities.

The legislation's legacy is mixed, particularly with regard to the success of the urban renewal and public housing elements. The government fell far short of its goal to build 810,000 units of new public housing by 1955, providing little aid to cities suffering from housing shortages. In fact, because of projects like Lincoln Center, a New York City cultural development including 4400 apartments for which 7000 apartments were torn down, the Act's urban redevelopment programs actually destroyed more housing units than they built.[5]

Meanwhile, the massive urban redevelopment efforts prompted by the Act came under fire for poor planning, failings with regard to social equity and fairness, and sometimes corruption (see, e.g., Manhattantown). Urban renewal also came under fire for discriminating against minorities, in that it often resulted in minority-heavy slums being destroyed and replaced with more expensive housing or non-residential public works that were not accommodating to the original inhabitants. The slogan adopted by critics equated "urban renewal" with "Negro removal."[6]

The federal government spent $13.5 billion on urban redevelopment and slum clearance projects between 1953 and 1986.[7]