Some languages are consistently head-initial or head-final at all phrasal levels. English is considered to be strongly head-initial, while Japanese is an example of a language that is consistently head-final. In certain other languages, such as German and Gbe, examples of both types of head direction occur. Various theories have been proposed to explain such variation.

There are various types of phrase in which the ordering of head and complement(s) may be considered when attempting to determine the head directionality of a language, including:

In some cases, particularly with noun and adjective phrases, it is not always clear which dependents are to be classed as complements, and which as adjuncts. Although in principle the head-directionality parameter concerns the order of heads and complements only, considerations of head-initiality and head-finality sometimes take account of the position of the head in the phrase as a whole, including adjuncts. The structure of the various types of phrase is analyzed below in relation to specific languages, with a focus on the ordering of head and complement. In some cases (such as English and Japanese) this ordering is found to be the same in practically all types of phrase, whereas in others (such as German and Gbe) the pattern is less consistent. Different theoretical explanations of these inconsistencies are discussed later in the article.

English is a strongly head-initial language. In a typical verb phrase, for example, the verb precedes its complements, as in the following example:[3]

The head of the phrase (the verb eat) precedes its complement (the determiner phrase an apple). Switching the order to "[VP [DP an apple] [V eat]]" would be ungrammatical.

Nouns also tend to precede any complements, as in the following example, where the relative clause (or complementizer phrase) that follows the noun may be considered to be a complement:[4]

Nouns do not necessarily begin their phrase; they may be preceded by attributive adjectives, but these are regarded as adjuncts rather than complements. (For preceding determiners, see below.) Adjectives themselves may be preceded by adjuncts, namely adverbs, as in extremely happy.[5] However, when an adjective phrase contains a true complement, such as a prepositional phrase, the head adjective precedes it:[6]

English adpositional phrases are also head-initial; that is, English has prepositions rather than postpositions:[7]

Grammatical words marking tense and aspect generally precede the semantic verb. This indicates that, if finite verb phrases are analyzed as tense phrases or aspect phrases, these are again head-initial in English. In the example above, did is considered a (past) tense marker, and precedes its complement, the verb phrase not swim. In the following, has is a (perfect) aspect marker;[10] again it appears before the verb (phrase) which is its complement.

German, while being predominantly head-initial, is less conclusively so than in the case of English. German also features certain head-final structures. For example, in a nonfinite verb phrase the verb is final. In a finite verb phrase (or tense/aspect phrase) the verb (tense/aspect) is initial, although it may move to final position in a subordinate clause. In the following example,[12] the verb phrase es finden is head-final, whereas the tense phrase werde es finden (headed by the auxiliary verb werde indicating future tense) is head-initial. 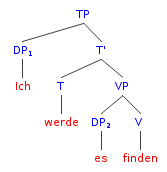 Adjective phrases may be head-final or head-initial. In the next example the adjective (stolze) follows its complement (auf seine Kinder).[14]

However, when essentially the same adjective phrase is used predicatvely rather than attributively, it becomes head-initial:[15]

Most adpositional phrases are head-initial (as German has mostly prepositions rather than postpositions), as in the following example, where auf comes before its complement den Tisch:[16]

German also has some postpositions, however (such as gegenüber "opposite"), and so adpositional phrases can also sometimes be head-final. Another example is provided by the analysis of the following sentence:[17]

In the following example, the complementizer dass precedes the tense phrase which serves as its complement:[19]

Nouns also typically come after any complements, as in the following example where the PP New York-de-no may be regarded as a complement:[20]

Adjectives also follow any complements they may have. In this example the complement of quantity, ni-juu-meetoro ("twenty meters"), precedes the head adjective takai ("tall"):[21]

Japanese uses postpositions rather than prepositions, so its adpositional phrases are again head-final:[22]

Determiner phrases are head-final as well:[8]

A complementizer (here to, equivalent to English "that") comes after its complement (here a tense phrase meaning "Mary did not swim"), thus Japanese complementizer phrases are head-final:[9]

In the case of strict head/complement ordering, however, Chinese appears to be head-initial. Verbs normally precede their objects. Both prepositions and postpositions are reported, but the postpositions can be analyzed as a type of noun (the prepositions are often called coverbs). For more details and examples of the relevant structures, see Chinese grammar. For a head-direction analysis of Chinese aspect phrases, see the theoretical section below.

In the second example the verb precedes the complement:

It has been debated whether the first example is due to object movement to the left side of the verb [24] or whether the lexical entry of the verb simply allows head-initial and head-final structures.[25]

Gbe noun phrases are typically head-final, as in this example:[27]

In the following example of an adjective phrase, Gbe follows a head-initial pattern, as the head yù precedes the intensifier tàùú.[28]

Gbe adpositional phrases are head-initial, with prepositions preceding their complement:[29]

Determiner phrases, however, are head-final:[30]

The idea that syntactic structures reduce to binary relations was introduced by Lucien Tesnière within the framework of dependency theory, which was developed during the 1960s. Tesnière distinguished two structures that differ in the placement of the structurally governing element (head):[32] centripetal structures, in which heads precede their dependents, and centrifugal structures, in which heads follow their dependents. Dependents here may include complements, adjuncts, and specifiers.

Joseph Greenberg, who worked in the field of language typology, put forward an implicational theory of word order, whereby:[33]

Noam Chomsky's Principles and Parameters theory in the 1980s[35] introduced the idea that a small number of innate principles are common to every human language (e.g. phrases are oriented around heads), and that these general principles are subject to parametric variation (e.g. the order of heads and other phrasal components may differ). In this theory, the dependency relation between heads, complements, specifiers, and adjuncts is regulated by X-bar theory, proposed by Jackendoff[36] in the 1970s. The complement is sister to the head, and they can be ordered in one of two ways. A head-complement order is called a head-initial structure, while a complement-head order is called a head-final structure. These are special cases of Tesnière's centripetal and centrifugal structures, since here only complements are considered, whereas Tesnière considered all types of dependents.

In the principles and parameters theory, a head-directionality parameter is proposed as a way of classifying languages. A language which has head-initial structures is considered to be a head-initial language, and one which has head-final structures is considered to be a head-final language. It is found, however, that very few, if any, languages are entirely one direction or the other. Linguists have come up with a number of theories to explain the inconsistencies, sometimes positing a more consistent underlying order, with the phenomenon of phrasal movement being used to explain the surface deviations.

According to the Antisymmetry theory proposed by Richard Kayne, there is no head-directionality parameter as such: it is claimed that at an underlying level, all languages are head-initial. In fact, it is argued that all languages have the underlying order Specifier-Head-Complement. Deviations from this order are accounted for by different syntactic movements applied by languages. Kayne argues that a theory that allows both directionalities would imply an absence of asymmetries between languages, whereas in fact languages fail to be symmetrical in many respects. Kayne argues using the concept of a probe-goal search (based on the ideas of the Minimalist program), whereby a head acts as a probe and looks for a goal, namely its complement. Kayne proposes that the direction of the probe-goal search must share the direction of language parsing and production.[37] Parsing and production proceed in a left-to-right direction: the beginning of sentence is heard or spoken first, and the end of the sentence is heard or spoken last. This implies (according to the theory) an ordering whereby probe comes before goal, i.e. head precedes complement.

Some linguists have rejected the conclusions of the Antisymmetry approach. Some have pointed out that in predominantly head-final languages such as Japanese and Basque, the change from an underlying head-initial form to a largely head-final surface form would involve complex and massive leftward movement, which is not in accordance with the ideal of grammatical simplicity.[34] Some take a "surface true" viewpoint: that analysis of head direction must take place at the level of surface derivations, or even the Phonetic Form (PF), i.e. the order in which sentences are pronounced in natural speech. This rejects the idea of an underlying ordering which is then subject to movement, as posited in Antisymmetry and in certain other approaches. It has been argued that a head parameter must only reside at PF, as it is unmaintainable in its original form as a structural parameter.[38]

Some linguists have provided evidence which may be taken to support Kayne's scheme, such as Lin,[39] who considered Standard Chinese sentences with the sentence-final particle le. Certain restrictions on movement from within verb phrases preceding such a particle are found (if various other assumptions from the literature are accepted) to be consistent with the idea that the verb phrase has moved from its underlying position after its head (the particle le here being taken as the head of an aspect phrase). However, Takita (2009) observes that similar restrictions do not apply in Japanese, in spite of its surface head-final character, concluding that if Lin's assumptions are correct, then Japanese must be considered to be a true head-final language, contrary to the main tenet of Antisymmetry.[40] More details about these arguments can be found in the Antisymmetry article.

She identified a strong correlation between the head-directionality type of a language and the ratio of verbs to nouns in the lexical inventory. Languages with a scarcity of simple verbs tend to be rigidly head-final, as in the case of Japanese, whereas verb-rich languages tend to be head-initial languages.[42]