For other uses, see Hijrah (disambiguation).

The Hegira or Hijrah (Arabic: هِجْرَة‎‎) is the migration or journey of the Islamic prophet Muhammad and his followers from Mecca to Yathrib, later renamed by him to Medina, in 622 CE.[1] In June 622 CE, after being warned of a plot to assassinate him, Muhammad secretly left his home in Mecca to emigrate to Yathrib, 320 km (200 mi) north of Mecca, along with his companion Abu Bakr.[3] Yathrib was soon renamed Madīnat an-Nabī, literally "the City of the Prophet", but an-Nabī was soon dropped, so its name is "Medina", meaning "the city".[4]

The Hijrah is also often identified erroneously with the start of the Islamic calendar, which was set to Julian 16 July 622. 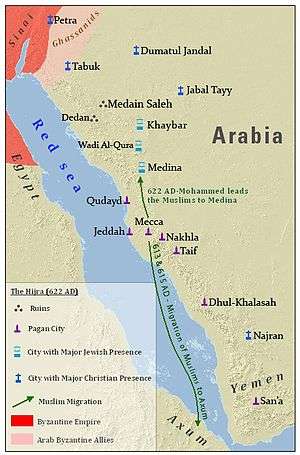 The Hijrah and other earlier Muslim migrations
Main article: Migration to Abyssinia

The first Hijrah is dated to 615[5][6] or Rajab (September-October) 613[7] when a group of Muslims counseled by Muhammad to escape persecution in Mecca arrived at the court of the Christian monarch (Negus) of the Ethiopian Empire, Ashama ibn-Abjar. Muhammad himself did not join this emigration. In that year, his followers fled Mecca's leading tribe, the Quraysh, who sent emissaries to Ethiopia to bring them back to the Arabian Peninsula. However, the Negus refused to send them back.[8]

In Mecca, at the pilgrimage season of 620, Muhammad met six men of the Banu Khazraj from Medina, propounded to them the doctrines of Islam, and recited portions of the Quran.[9][10] Impressed by this, the six embraced Islam,[11] and at the Pilgrimage of 621, five of them brought seven others with them. These twelve informed Muhammad of the beginning of gradual development of Islam in Medina, and took a formal pledge of allegiance at Muhammad's hand, promising to accept him as a prophet, to worship none but one God, and to renounce certain sins such as theft, adultery, and murder. This is known as the "First Pledge of al-Aqaba".[12][13][14] At their request, Muhammad sent with them Mus‘ab ibn 'Umair to teach them the instructions of Islam. Biographers have recorded the considerable success of Mus`ab ibn `Umair in preaching the message of Islam and bringing people under the umbrella of Islam in Medina.

The next year, at the pilgrimage of 622, a delegation of around 75 Muslims of the Banu Aws and Khazraj from Medina came, and in addition to restating the formal promises, they also assured Muhammad of their full support and protection if the latter would migrate to their land. They invited him to come to Medina as an arbitrator to reconcile among the hostile tribes.[15] This is known as the "second pledge at al-Aqabah",[16][17] and was a 'politico-religious' success that paved the way for his and his followers' immigration to Medina.[18] Following the pledges, Muhammad encouraged his followers to migrate to Medina, and in a span of two months, nearly all the Muslims of Mecca migrated to Medina.

During the early seventh century, Medina was inhabited by two types of population: Jewish and pagan Arabs. The Jews there had three principal clans – Banu Qaynuqa, Banu Nadir, and Banu Qurayza. The Arab pagans had two tribes – the Banu Aws and Khazraj. At that time, the Jews there had the upper hand with their large settlement and huge property.[11] Before the encounter between Muhammad and the six men from Medina in 620, there ensued a terrible battle between Aws and Khazraj, known as the Battle of Buath, in which many leading personalities of both the sides died and left Yathrib in a disordered state.[19] Traditional rules for maintaining law and order became dysfunctional, and, without a neutral man with considerable authority over things, stability seemed unlikely.[20] As the pagan Arabs of Medina lived in close proximity to the Jews, they had gained some knowledge about their scriptures, and had heard the Jews awaiting the arrival of a future prophet. It is because of this knowledge, taken together with their need for an adjudicator, that the six men who met Muhammad at the pilgrimage season of 620 readily accepted his message, lest the Jews should steal a march over them.[11][16]

Quba Mosque, the first mosque in the history of Islam, at the outskirts of Medina. It was founded by Islamic prophet Muhammad when he immigrated to Medina

According to Muslims tradition, when he received divine direction to depart from Mecca, Muhammad began taking preparation and informed Abu Bakr of his plan. On the night of his departure, Muhammad's house was besieged by men of the Quraysh who planned to kill him in the morning. At the time, Muhammad possessed property of the Quraysh given to him in trust, so he handed it over to ‘Ali and directed him to return it to its owners, and asked him to lie down on his bed assuring him of God's protection. It is said that when Muhammad emerged from his house, he recited the ninth verse of surah Ya Sin of the Quran and threw a handful of dust at the direction of the besiegers, causing the besiegers to be unable to see him.[21][22] Soon Muhammad joined Abu Bakr, left the city, and the two took shelter in a cave outside the city. Next morning, the besiegers were frustrated to find ‘Ali in Muhammad's place. Fooled and thwarted by Muhammad's plan, they rummaged the city in search for him,[23] and some of them eventually reached the threshold of the cave, but success eluded them. When the Quraysh came to know of Muhammad's escape, they announced heavy reward for bringing Muhammad back to them, alive or dead. Unable to resist this temptation, pursuers scattered in all directions. After staying for three days, Muhammad and Abu Bakr resumed their journey and were pursued by Suraqa bin Malik. But each time he neared Muhammad's party, his horse stumbled and he finally abandoned his desire of capturing Muhammad.[24] After eight days' journey, Muhammad entered the outskirts of Medina around June 622,[1] but did not enter the city directly. He stopped at a place called Quba', a place some miles from the main city, and established a mosque there. After a four-day stay at Quba', Muhammad along with Abu Bakr continued their migration to Medina, participated in their first Friday prayer on the way, and upon reaching the city, were greeted cordially by its people.

The Muslim year during which the Hijrah occurred was designated the first year of the Islamic calendar by Umar in 638 or 17 AH (anno hegirae = "in the year of the Hijrah").[4] The following table lists the dates of various events of Muhammad's Hijrah as mentioned by Fazlur Rehman Shaikh and F.A. Shamsi in their works. It should be noted that Fazlur Rehman in his work has listed other dates for the arrival of Muhammad in Quba', as proposed by modern scholars, ranging from 31 May 622 to 22 November 622.

These dates are discussed by Al-Biruni, Alvi, Ibn Sa'd, Abu Ja'far and Ibn Hisham.[25] The hypothetical dates in the retro-calculated Islamic calendar extended back in time differ from the actual dates as they were on the Julian calendar. Annual celebration of the Hijrah has long been assigned to 1 Muharram, the first day of the Muslim year, causing many writers to confuse the first day of the year of the Hijrah with the Hijrah itself, erroneously stating that the Hijrah occurred on 1 Muharram AH 1[4] (which would be 19 April 622 in Fazlur Rehman Shaikh's system) or even the hypothetical Gregorian date from retro-calculating 26 Rabi' I in AH 1 to 16 July 622 (not to be confused with Julian 16 July 622, the retro-calculated start date for of the regular Hijri calendar system) even though the first visit to Medina for Friday prayers actually occurred on 16 Rabi' I (i.e., 2 July 622).

Thus it is important to remember that whenever the tabular Islamic calendar invented by Muslim astronomers is extended back in time it changes all these dates by about 88 days or three lunar months as the first day of the year during which the Hijrah occurred, 1 Muharram AH 1, would be mistaken from Monday 19 April 622 to Friday 16 July 622. The Muslim dates of the Hijrah are those recorded in an original lunisolar Arabic calendar that were never converted into the purely lunar calendar to account for the three intercalary months inserted during the next nine years until intercalary months were prohibited during the year of Muhammad's last Hajj (AH 10).

Muhammad's followers suffered from poverty after fleeing persecution in Mecca and migrating with Muhammad to Medina. Their Meccan persecutors seized their wealth and belongings left behind in Mecca.[26]

Beginning in January 623, some of the Muslims resorted to the tradition of raiding the Meccan caravans that traveled along the eastern coast of the Red Sea from Mecca to Syria. Communal life was essential for survival in desert conditions, as people needed support against the harsh environment and lifestyle. The tribal grouping was thus encouraged by the need to act as a unit. This unity was based on the bond of kinship by blood.[27] People of Arabia were either nomadic or sedentary, the former constantly traveling from one place to another seeking water and pasture for their flocks, while the latter settled and focused on trade and agriculture. The survival of nomads was also partially dependent on raiding caravans or oases, thus they saw this as no crime.[26][28]