The Ethiopian Empire (Amharic: የኢትዮጵያ ንጉሠ ነገሥት መንግሥተ, Mängəstä Ityop'p'ya?), also known as Abyssinia (a Europeanized form of the Arabic al-Habash),[9] was a kingdom that spanned a geographical area covered by the northern half of Ethiopia. It existed from approximately 1137 (beginning of Zagwe dynasty) until 1974, when the Solomonic dynasty was overthrown in a coup d'état.

Following the British occupation of Egypt in 1882, Ethiopia and Liberia were the only two African nations to remain independent during the Scramble for Africa by the European imperial powers in the late 19th century.

In 1974, Ethiopia was one of only three countries in the world to have the title of Emperor for its head of state (the others being Japan, which still has the Emperor as its nominal ruler and Iran under the Pahlavi dynasty). It was the second-to-last country in Africa to use the title of Emperor (the last being the Central African Empire, which was implemented between 1976 and 1979 by Emperor Bokassa I).

After the conquest of Aksum by Queen Gudit or Yodit, a period began which some scholars refer to as the Ethiopian Dark Ages.[10] According to Ethiopian tradition, she ruled over the remains of the Aksumite Empire for 40 years before transmitting the crown to her descendants.[10] Very little is known about the queen or the state, if indeed there even was one she set up. What is evident, however, is that her reign marked the end of Aksumite control in Ethiopia.

The last of Queen Yodit's successors were overthrown by Mara Takla Haymanot. He founded the Zagwe dynasty in 1137,[10] and married a female descendant of the last Aksumite emperor to stake his claim as the legitimate heir to the long dead empire.[10] The kingdom's capital was at Adafa, not far from modern day Lalibela in the Lasta mountains.[11] The Zagwe continued the Christianity of Aksum and constructed many rock-hewn churches such as those at Lalibela. The dynasty would last until its overthrow by a new regime claiming descent from the old Aksumite kings.

In 1270,[11] the Zagwe dynasty was overthrown by a king claiming lineage from the Aksumite kings and, hence, Solomon. The thus-named Solomonic dynasty was founded and ruled by the Habesha, from whom Abyssinia gets its name. The Habesha reigned with only a few interruptions from 1270 until the late 20th century. It was under this dynasty that most of Ethiopia's modern history occurred. During this time, the empire conquered and incorporated virtually all the peoples within modern Ethiopia. They successfully fought off Italian, Arab and Turkish armies and made fruitful contacts with some European powers.

In 1529 Adal forces, led by Ahmad ibn Ibrahim al-Ghazi, invaded the Ethiopian Empire in what is known as the Abyssinian–Adal war. Adal occupation lasted 14 years. During the conflict, Adal employed cannons provided by the Ottoman Empire. In the aftermath of the war, Adal annexed Ethiopia, uniting it with territories in what is now Somalia. In 1543, with the help of the Portuguese Empire, the Solomonic dynasty was restored.

Scramble for Africa and modernization 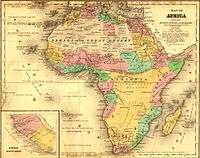 Africa in 1884 before the Berlin Conference to divide Africa 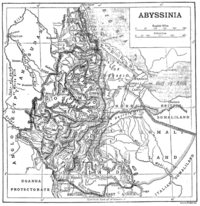 Ethiopia in 1911, following the conquests and treaties of Menelik II.

In 1868, following the imprisonment of several missionaries and representatives of the British government, the British engaged in the punitive Expedition to Abyssinia. This campaign was a success for Britain and the Ethiopian emperor committed suicide.

The 1880s were marked by the Scramble for Africa. Italy, seeking a colonial presence in Africa, invaded Ethiopia and following a successful conquest of some coastal regions, forced the Treaty of Wuchale upon Shewa (an autonomous kingdom within the Ethiopian Empire), creating the colony of Eritrea.

Due to significant differences between the Italian and Amharic translations of the Treaty of Wuchale, Italy believed they had subsumed Ethiopia as a client state. Ethiopia repudiated the treaty in 1893. Insulted, Italy declared war on Ethiopia in 1895. The First Italo-Ethiopian War resulted in the 1896 Battle of Adwa, in which Italy was decisively defeated. As a result, the Treaty of Addis Ababa was signed in October, which strictly delineated the borders of Eritrea and forced Italy to recognize the independence of Ethiopia.

Delegations from the United Kingdom and France — European powers whose colonial possessions lay next to Ethiopia — soon arrived in the Ethiopian capital to negotiate their own treaties with this newly-proven power.

In 1935 Italian soldiers, commanded by Marshal Emilio De Bono, invaded Ethiopia in what is known as the Second Italo-Ethiopian War. The war lasted seven months before an Italian victory was declared. The invasion was condemned by the League of Nations, though not much was done to end the hostility.

During the conflict, Italy used sulfur mustard in chemical warfare, ignoring the Geneva Protocol that it had signed seven years earlier. The Italian military dropped mustard gas in bombs, sprayed it from airplanes, and spread it in powdered form on the ground. 150,000 chemical casualties were reported, mostly from mustard gas. In the aftermath of the war Italy annexed Ethiopia, uniting it with Italy's other colonies in eastern Africa to form the new colony of Italian East Africa, and Victor Emmanuel III of Italy adopted the title "Emperor of Abyssinia".

On 10 June 1940, Italy declared war on the United Kingdom and France, as France was in the process of being conquered by Germany at the time and Benito Mussolini wished to expand Italy's colonial holdings. The Italian conquest of British Somaliland in August 1940 was successful, but the war turned against Italy afterward. Haile Selassie returned to Ethiopia from England to help rally the resistance. The British began their own invasion in January 1941 with the help of Ethiopian freedom fighters, and the last organized Italian resistance in Italian East Africa surrendered in November 1941.

In 1974, a pro-Soviet Marxist–Leninist military junta, the "Derg", led by Mengistu Haile Mariam, deposed Haile Selassie and established a one-party communist state. Haile Selassie was imprisoned and died in unclear circumstances, the most likely known rumour being that he was suffocated with an ether-soaked pillow.[12]