Simon Gerrans (born 16 May 1980) is an Australian professional road bicycle racer, who currently rides for the Australian UCI ProTour team, Orica–BikeExchange.[3] Gerrans is a two-time Australian National Road Race Champion, having won the title in 2012,[4] and 2014. His biggest triumphs are winning the Tour Down Under a record four times,[5] and getting the better of one-day races such as the 2009 GP Ouest-France, the 2012 Milan–San Remo, the 2012 and 2014 Grand Prix Cycliste de Québec,[6] the 2014 Liège–Bastogne–Liège, and stage wins in all three Grand Tours. In the 2013 Tour de France, Gerrans claimed the yellow jersey on Stage 4 after being part of the winning team in the Stage 4 team time trial in Nice.

Gerrans was born in Melbourne, Victoria and grew up in Mansfield, Victoria.

He took up cycling after injuring his knee and speaking with his neighbour, former Yellow Jersey holder Phil Anderson whom he credits with introducing him to the sport.[7] Gerrans was an Australian Institute of Sport scholarship holder.[8]

In 2002, he finished fifth in the senior Australian National Road Race Championships, and took the under 23 title. He went on to ride as a trainee with the Carvalhelhos-Boavista team, based in Portugal from 1 September 2003, and then as a trainee for the AG2R Prévoyance team from 1 September 2004. He turned professional in 2005, staying with AG2R Prévoyance, and participated in his first Tour de France in the same year.

Gerrans underwent surgery at a hospital in Nice following a heavy fall in the GP d'Ouverture la Marseillaise in February, 2006. A pin was inserted into his shattered left collarbone and a screw put into his broken right shoulder, and had stitches in his head.[9] He resumed training three weeks later and went on to represent Australia at the 2006 Commonwealth Games in Melbourne.[10]

In 2008, Gerrans rode for the Crédit Agricole team. He won stage 15 of the Tour de France, the high point of his career so far, after being in the four man breakaway for most of the day. Barely surviving attacks from the other strong climbers in the breakaway, in which the fourth rider was dropped from the group, he eventually sprinted away in the last few dozen metres, without a response from the two remaining contenders.[11]

Following the closure of the Crédit Agricole team Gerrans signed with the UCI Professional Continental Cervélo TestTeam for the 2009 season.[12] Despite his success of the previous year, he was not included in the squad for the 2009 Tour de France.[13]

On stage 14 of the 2009 Giro d'Italia Gerrans attacked his breakaway companions on the short steep climb of San Luca, near Bologna, to win the stage – the first Grand Tour stage victory for Cervélo TestTeam.[14] After winning 10th stage of the 2009 Vuelta a España Gerrans became the first Australian to win a stage of each of the three Grand Tours.[15]

He signed with Team Sky for season 2010[16] and made the Team Sky selection for the 2010 Tour de France. Gerrans was involved in a large crash on Stage 8 of the race resulting in a broken arm and his withdrawal from the race.[17]

In 2011, Gerrans came 3rd in the Amstel Gold Race.[18] In August, he won the Danmark Rundt.[19] Shortly after that victory, it was announced that Gerrans would join GreenEDGE for the team's inaugural season in 2012.[2]

In January 2012, Gerrans became national road race champion for the first time, out-sprinting Lampre–ISD's Matthew Lloyd and Team Sky's Richie Porte for victory.[4] Later in the month he won the Tour Down Under for the second time. He secured the victory on stage 5, where his second-place finish allowed him to take the ochre jersey ahead of Valverde, who won the stage. Both riders were on the same time, but due to better cumulative stage finishes, Gerrans took the lead and did not relinquish it.[20][21] On 17 March 2012, Gerrans won Milan–San Remo in a three-man sprint finish, beating RadioShack–Nissan's Fabian Cancellara and Liquigas–Cannondale's Vincenzo Nibali to the line in Sanremo.[22] Later in the season, Gerrans took second place at the Clásica de San Sebastián, dominating the chase group sprint as the lone escapee Luis Leon Sanchez (Rabobank) crossed the line seven seconds before him.[23] In September, Gerrans took his third victory in a 2012 UCI World Tour race by being victorious in the Grand Prix Cycliste de Québec. He countered an attack by BMC Racing Team's Greg Van Avermaet with 3.5 kilometres (2.2 mi) to race. The pair went up the final difficulties of the day and broke clear of the bunch. Gerrans then out sprinted the Belgian to the finish line while the chasers were closing in at four seconds.[24] 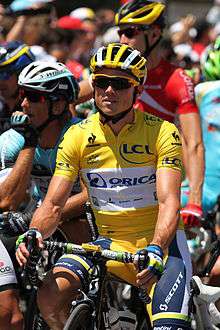 Gerrans in the Yellow Jersey at the 2013 Tour de France

In 2013, with the help of his team Orica–GreenEDGE, he enjoyed much success on the bike. He began the season with a decent Tour Down Under, winning the penultimate stage; after getting in a breakaway with Javier Moreno of Spain and Tom-Jelte Slagter of the Netherlands, Gerrans out-sprinted Slagter for the stage win. However most of his real successes came from Europe. Gerrans enjoyed a third-place finish in the Amstel Gold Race. His participation in the Volta a Catalunya yielded more success, winning the sixth stage in a sprint finish; he did so by a bike length ahead of Gianni Meersman of Belgium. Gerrans began the Tour of the Basque Country well taking out the first stage honours. After a lead-out from team-mate Pieter Weening, Gerrans sprinted to his third stage victory of the year ahead of a fast-finishing Peter Velits of Omega Pharma–Quick-Step. He also finished tenth at Liège–Bastogne–Liège. At the Tour de France, Gerrans and his team endured a very successful start to the tour. After avoiding much of the carnage of the first two stages of the tour, Gerrans ended up taking the stage honours for the third stage after a sprint to the line finish where he narrowly edged out Slovakian Peter Sagan. The stage win was the first for Orica–GreenEDGE at the Tour. Orica–GreenEDGE also won the team time trial the following day, beating Omega Pharma–Quick-Step; as a result, Gerrans donned the race leader's yellow jersey, only the sixth Australian cyclist to do so.

After winning the Australian National road race, Gerrans went on to win the Tour Down Under for the third time in his career, besting his fellow countryman Cadel Evans by a single second. He also prevailed on the first stage in the process and gained the leader's jersey thanks to time bonuses at intermediate sprints and stage finishes.[5] On 27 April 2014 Gerrans won the cycling monument Liège–Bastogne–Liège in the sprint, becoming the first Australian to win the race.[25] On Stage 1 of the 2014 Tour de France, Mark Cavendish collided with Gerrans in the final 500 metres, with both crashing heavily to the ground. The crash happened as the front of the peloton overtook lone escapee Fabian Cancellara. Having failed to get the inside line on the left-hand curve, with his Omega-Pharma team out of the picture, Cavendish was pushing with his head and shoulders in a desperate attempt to move Australia's Simon Gerrans to the left. Cavendish wanted to get a clear run to the line, but Gerrans did not yield because the Frenchman Bryan Coquard was to his left. Cavendish lost control of his front wheel and fell heavily on his right shoulder, with Gerrans, a stage winner and yellow jersey wearer last year, hitting the deck simultaneously.[26] Gerrans went back to his winning ways in Quebec City, coming back from a mechanical with 20 km left to win the Grand Prix Cycliste de Québec after surging past Tom Dumoulin on the slightly uphill finish. He is the first cyclist to take two victories in the Canadian World Tour event.[6] Two days later, Gerrans realized another first: he became the first rider to win the Grand Prix Cycliste de Québec and Montreal back-to-back in the same year as he won the sprint in the Grand Prix Cycliste de Montréal.[27] Those two wins announced very good form just ahead of the World Championships in Ponferrada, in which he came in second place after his select group failed to reach lone escapee Michal Kwiatkowski.[28]

Gerrans had an unlucky start to the season, as he broke his collarbone in January while he was training for the Tour Down Under. His first race back was the Strade Bianche, but he fractured his elbow in another crash during the Italian event.[29] He was looking for a result as he came back to racing, but his bad luck continued as he crashed twice in Liège–Bastogne–Liège and abandoned.[30] However, he did not sustain any serious injuries in the latter crashes. He participated to the Giro d'Italia and crashed again on the rainy twelfth stage, forcing him to abandon.[31] In the Tour de France, Gerrans was involved in a massive, high-speed crash on stage 3 and he had to quit the race due to a broken wrist.[32]

Gerrans started the year well by winning two stages of a World Tour Australia race, the Tour Down Under.[33] Thanks to the bonus seconds on offer for placing highly in the individual stages, he won the general classification for the fourth time in his career.[34] This sent Gerrans to the top of the new UCI World Ranking, which was starting fresh from January 2016, [35] a position he held for 7 weeks.[36] He broke his collarbone on Stage 12 of the Tour de France.[37]

Overall Tour Down Under[5]

This table shows Gerrans' results in the five cycling monuments.