The 2014 Tour de France was the 101st edition of the race, one of cycling's Grand Tours. The 3,358.1-kilometre (2,086.6 mi) race included 21 stages, starting in Leeds, United Kingdom, on 5 July and finishing on the Champs-Élysées in Paris on 27 July. Vincenzo Nibali of the Astana team won the race by more than seven minutes, the biggest winning margin since 1997.[1] Jean-Christophe Péraud (Ag2r–La Mondiale) placed second, with Thibaut Pinot (FDJ.fr) third. 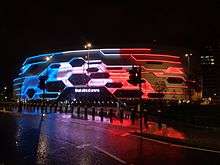 Twenty-two teams participated in the 2014 edition of the Tour de France.[2] All of the eighteen UCI ProTeams were automatically invited, and obliged, to attend the race.[3] On 14 January 2015, the organiser of the Tour, Amaury Sport Organisation (ASO), announced the five second-tier UCI Professional Continental teams given wildcard invitations: Cofidis, Bretagne–Séché Environnement, IAM Cycling and NetApp–Endura.[4] The team presentation – where the members of each team's roster are introduced in front of the media and local dignitaries – took place at the First Direct Arena in Leeds, United Kingdom, on 3 July, two days before the opening stage held in the city. The riders arrvied to the arena by a ceremonial ride from the University of Leeds. The event included performances from Embrace and Opera North, in front of an audience of 10,000.[5]

The number of riders allowed per squad was nine, therefore the start list contained a total of 198 riders.[6] Of these, 47 were riding the Tour de France for the first time.[7] The total number of riders that finished the race was 164.[8] The riders came from 33 countries; France, Spain, Italy, Netherlands, Germany, Australia and Belgium all had 10 or more riders in the race.[6] Giant–Shimano's Ji Cheng was the first Chinese rider to participate in the Tour.[9] Riders from eight countries won stages during the race; German riders won the largest number of stages, with seven.[10] The average age of riders in the race was 29.88 years,[11] ranging from the 20-year-old Danny van Poppel to the 42-year-old Jens Voigt, both Trek Factory Racing riders.[12] Voigt, riding in his final year as a professional, equalled Stuart O'Grady's record for most appearances in the Tour with 17.[13] Of the total average ages, Garmin–Sharp was the youngest team and Trek Factory Racing the oldest.[11]

The teams entering the race were:[2]

Chris Froome (pictured in 2013) and Alberto Contador (pictured in 2015), were seen by many as the top two general classification pre-race favourites, respectively; both were forced to abandon the race due to injuries caused by crashes.

According to many observers before the race the top two favourites for the general classification were Chris Froome (Team Sky) and Alberto Contador (Tinkoff–Saxo), respectively.[14][15][16][17][18] Their closest rivals were thought to have been Vincenzo Nibali (Astana) and Alejandro Valverde (Movistar Team).[15][17][18][19] A possible contender was the 2013 Tour runner-up, Nairo Quintana, who had chosen not to ride the Tour after his 2014 Giro d'Italia (one of the three Grand Tours, along with the Tour de France) win that took place during May.[20] The riders considered outsiders were Andrew Talansky (Garmin–Sharp), Rui Costa (Lampre–Merida), Thibaut Pinot (FDJ.fr), Tejay van Garderen (BMC Racing Team), Jurgen Van den Broeck (Lotto–Belisol).[15][16][17][18][19][21]

Defending champion and runner-up in the 2012 Tour, Froome, had shown his form so far in the 2014 season by winning the general classification of two stage races, the Tour of Oman and the Tour de Romandie.[18] Contador, winner of the 2007 and 2009 Tours, also won two stage races, the Tirreno–Adriatico and the Tour of the Basque Country in the lead-up to the Tour, placing second overall in the Volta ao Algarve, Volta a Catalunya and Critérium du Dauphiné.[18] Nibali had missed the 2013 Tour as he had focused on the 2013 Giro, which he won. His highest Tour result was third in 2012.[16] His best results so far in the 2014 season were fifth in the Tour de Romandie and seventh in the Dauphiné.[19] Valverde, who placed eight in the 2007 Tour, had a number of wins in the 2014 season prior to the Tour, most notably, the Vuelta a Andalucía stage race and the La Flèche Wallonne one-day race.[18]

The sprinters considered favourites for the points classification and wins on the flat or hilly bunch sprint finishes were Peter Sagan (Cannondale), Mark Cavendish (Omega Pharma–Quick-Step), Andre Greipel (Lotto–Belisol), Alexander Kristoff (Team Katusha) and Giant–Shimano riders Marcel Kittel and John Degenkolb.[22][23][24] Winner of the points classification in the two previous Tours, Sagan, had won the E3 Harelbeke one-day race and won the points classifications in three stage races, the Tirreno–Adriatico, the Tour of California and the Tour de Suisse, during the 2014 season up until the Tour.[23][25] Cavendish, who won the points classification in 2011, had nine wins so far in the season and had the full backing of his team.[23][24] Greipel had amassed a total of twelve wins during the season prior to the Tour, but his team would have to share support for him and Van den Broeck.[23][24] Kristoff had won the Milan–San Remo, and was considered a dark horse for the points classification.[23] Kittel was seen as a top contender for the bunch sprints, as he won the most stages in the 2013 Tour,[24] a total of four.[26] He had a amassed seven wins so far in the season, two of which were in the Giro.[24] It was thought that Degenkolb would be used by Giant–Shimano for the more challenging sprints. His major results of the season were first place in Gent–Wevelgem and second place in Paris–Roubaix, both one-day races.[24] 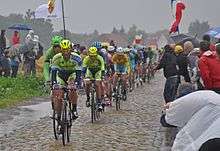 On 14 December 2012, the ASO announced that the English historic county of Yorkshire would host the 2014 edition's race stages (known as the Grand Départ).[27] Further details of the first three stages held in the United Kingdom were released on 17 January 2014. This was the fourth Tour to contain stages in the United Kingdom, after 1974, 1994 and 2007.[28] The entire route was announced by the ASO on 23 October 2013 at the official presentation at the Palais des Congrès in Paris. At the event, Stephen Roche, winner of the 1987 Tour, described the route as "fairly soft".[29] Notable features of the route were fifth stage's sections of sett paving, the five high altitude stage finishes and the lack time trialling, with only stage twenty's 54 km (34 mi) individual time trial.[30]

The first of the two stages held in Yorkshire started in Leeds and finished in Harrogate, with stage two held between York and Sheffield. After a transfer to the East Anglian city of Cambridge, the race went south to the finish in London. The Tour transferred acrossed the English Channel to the start of stage four Le Touquet-Paris-Plage, with the finish in Lille. Stage five began in Ypres, Belgium, and finished back in France. The following three stages crossed the north-east to the Vosges Mountains for stages nine and ten. The eleventh stage took place between Besançon and Oyonnax through the Jura Mountains. Stage tweleve headed west to Saint-Étienne, with the next stage moving back east into the Chartreuse Mountains and the fourteenth stage. The following stage took the race south to Nîmes. After a transfer to Carcassonne, the route moved into the Pyrenees for the next two stages. The nineteenth stage took a northerly direction to the department of Dordogne and the location of stage twenty. A long transfer took the Tour back to the north-east to finish with the Champs-Élysées stage in Paris.[31]

There were four main individual classifications contested in the 2014 Tour de France, as well as a team competition. The most important was the general classification, which was calculated by adding each rider's finishing times on each stage.[37] There were no time bonuses given at the end of stages for this edition of the Tour.[38] If a crash had happened within the final 3 km (1.9 mi) of a stage, not including the time trial and summit finishes, the riders involved would have received the same time as the group they were in when the crash occurred.[39] The rider with the lowest cumulative time was the winner of the general classification and was considered the overall winner of the Tour.[37] The rider leading the classification wore a yellow jersey.[40]

The second classification was the points classification. Riders received points for finishing among the highest placed in a stage finish, or in intermediate sprints during the stage. The points available for each stage finish were determined by stage's type.[41] The leader was identified by a green jersey.[40]

The third classification was the mountains classification. Points were awarded to the riders that reached the summit of the most difficult climbs first. The climbs were categorised as fourth-, third-, second-, first-category and hors catégorie (English: beyond category), with the more difficult climbs rated lower. Double points were awarded on the summit finishes on stages 10, 13, 14, 17 and 18.[33] The leader wore a white jersey with red polka dots.[40]

The final classification was a team classification. This was calculated using the finishing times of the best three riders per team on each stage; the leading team was the team with the lowest cumulative time. The number of stage victories and placings per team determined the outcome of a tie.[38] The riders in the team that lead this classification were identified with yellow number bibs on the back of their jerseys and yellow helmets.[40]

In addition, there was a combativity award given after each stage to the rider considered, by a jury, to have "made the greatest effort and who has demonstrated the best qualities of sportsmanship".[38] No combativity awards were given for the time trial and the final stage.[42] The winner wore a red number bib the following stage.[40] At the conclusion of the Tour, Alessandro De Marchi won the overall super-combativity award,[8] again, decided by a jury.[38]

A total of €2,035,000 was awarded in cash prizes in the race. The overall winner of the general classification received €450,000, with the second and third placed riders got €200,000 and €100,000 respectively. All finishers of the race were awarded with money. The holders of the classifications benefited on each stage they led; the final winners of the points and mountains were given €25,000, while the best young rider and most combative rider got €20,000. The winners of the team classification received €50,000.[43] There were also two special awards each with a prize of €5000, the Souvenir Henri Desgrange, given to first rider to pass the summit of the highest climb in the Tour, the Col d'Izoard in stage fourteen, and the Souvenir Jacques Goddet, given to the first rider to pass Goddet's memorial at the summit of the Col du Tourmalet in stage eighteen.[44] Joaquim Rodríguez won the Henri Desgrange and Blel Kadri won the Jacques Goddet.[45][46]

The race was the eighteenth of the twenty-nine events in the UCI World Tour, with riders from the ProTeams competing individually for points that contributed towards the rankings.[52] Points were awarded to the top twenty finishers in the general classification and to the top five finishers in each stage.[53] The 200 points accrued by Vincenzo Nibali moved him from fortieth position to second in the individual ranking. Movistar Team retained their lead of the team ranking, ahead of second-placed Ag2r–La Mondiale. Spain remained as leaders of the nations ranking, with Italy second.[54]