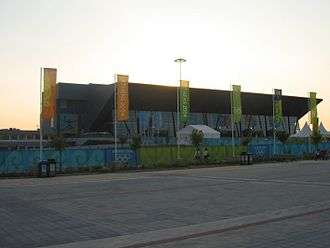 Exterior of the arena.

The arena had in use its full seating capacity of 15,000 spectators for basketball,[1] and 13,500 for handball during the 2004 Summer Olympic Games. However, only 12,500 seats were made available to the public for the basketball tournament, and only 10,700 for the handball tournament. After the Olympics, only the lower tier 8,500 seats have been made available by the arena's owners for public use. However, the arena can still hold 15,000 for basketball with the upper tier in full use. The arena is also known as the National Athletic Center Elliniko "Makis Liougas".

The facility, which was built by Michaniki and EllisDon Construction Corporation was completed on May 31, 2004, and officially opened on July 30, 2004. It was built to be one of the most NBA-like arenas in Europe at the time. It was converted into a basketball arena by converting the old Athens Airport aircraft repair hangar of the Olympic Airways airline that had closed in the year 2001. The metal frame of the arena is the only part of the structure that remains from the original building. This was done to save in costs for both land and construction. The cost of the project was about €49 million euros in 2003 costs.

The arena hosted the basketball preliminary games and the handball finals.[2] During the 2004 Summer Paralympics, it was also the venue used for wheelchair rugby.

The arena has been used as a home arena, at one time or another, of the Greek Basket League basketball teams Panionios, Panellinios and AEK Athens. It also hosted several finals matches of the Greek Cup.