Hilton Worldwide Holdings, Inc. (formerly, Hilton Worldwide and Hilton Hotels Corporation) is an American multinational hospitality company that manages and franchises a broad portfolio of hotels and resorts. Founded by Conrad Hilton in 1919, the corporation is now led by Christopher J. Nassetta.

Hilton Worldwide is headquartered in Tysons Corner, Virginia. As of October 2016, its portfolio includes 4,820 properties (including timeshare properties) with 788,864 rooms in more than 100 countries and territories[4]", making the corporation the largest hotel chain in the world by rooms and international presence.[5] Prior to their December 2013 IPO, Hilton was ranked as the 36th largest privately held company in the United States by Forbes.[6]

Conrad Hilton founded the company in Cisco, Texas in 1919 and established headquarters in Beverly Hills, California from 1969 until 2009. The company moved to Tysons Corner, unincorporated Fairfax County, Virginia, near McLean in August 2009.[8][9][10]

To be the preeminent global hospitality company - the first choice of guests, team members, and owners alike.

In 1925, the Dallas Hilton became the first hotel to use the Hilton name.[12] In 1927, Hilton expanded to Waco, Texas where he opened the first hotel with air-conditioning in public areas and cold running water.

The entrance to the Waldorf-Astoria in New York, Conrad's "greatest of them all."

In 1943, Hilton purchased the Roosevelt Hotel and the Plaza Hotel in New York, establishing the first hospitality company to span the contiguous United States. The company incorporated in 1946 as the Hilton Hotels Corporation, and subsequently began public trading of shares on the New York Stock Exchange.

Hilton International was born a few years later (in 1949) with the opening of the Caribe Hilton Hotel in Puerto Rico. Barman Ramon "Monchito" Marreno claimed he created the alcoholic Piña Colada drink at this resort. Hilton purchased the Waldorf Astoria New York in the same year. Conrad Hilton was featured on the cover of Time Magazine, the only hotelier at the time to have been so.

The Hotels Statler Company was acquired in 1954 for $111,000,000 in what was then the world's most expensive real estate transaction.[13] One year later, Hilton created the world's first central reservations office titled "HILCRON." The reservations team in 1955 consisted of eight members on staff booking reservations for any of Hilton's then 28 hotels. Reservations agents would use the "availability board" to track records. The chalk board measured 30 feet by 6 feet, and allowed HILCRON to make over 6,000 reservations in the year.[14] Bookings could be made for any Hilton via telephone, telegram, or Teletype. Later in 1955, Hilton launched a program to ensure every hotel room would include air-conditioning. In late 1955, Hilton opened the first post World War II property in Istanbul.

Hilton is credited with pioneering the airport hotel concept with the opening of the San Francisco Airport Hilton in 1959. In 1965, Hilton launched Lady Hilton, the first hotel concept created specifically for women guests. To appeal to female travelers, a number of properties offered floors occupied by only women along with distinct amenities for their usage. In 1969, the first DoubleTree Hotel opened. At the time, Hilton was not affiliated with the brand until its acquisition of the parent company in 1999.

When Hilton purchased the Flamingo Las Vegas in 1970, the company would become the first in the domestic gaming business to be listed on the NYSE. In 1979, founder Conrad Hilton died at the age of 91. Hilton Hotels Corporation later created the Conrad Hotels brand in honor of Hilton. Hilton HHonors, the company's guest loyalty program, was initiated in 1987. In 1994, the HHonors surpassed competing hotel loyalty programs by offering members both hotel credit points and airline credit miles.

The company is also noted to have been a sponsor of the United States Olympic Team.

Two chains with one name

The company spun off its international operations into a separately traded company on December 1, 1964, known as Hilton International Co. It was acquired in 1967 by Trans World Corp., the holding company for Trans World Airlines. In 1986, it was sold to UAL Corp., the holding company for United Airlines, which became Allegis Corp. in an attempt to re-incarnate itself as a full-service travel company, encompassing Westin Hotels and Hertz rental cars in addition to Hilton International and United Airlines. In 1987, after a corporate putsch, the renamed UAL Corp. sold Hilton International to Ladbroke Group plc, a British leisure and gambling company, which, in May 1999, adopted the name Hilton Group plc.[15] 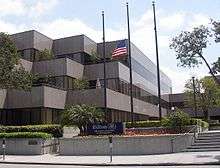 In 1997, to minimize longtime consumer confusion, the American and British Hilton companies adopted a joint marketing agreement under which they shared the same logos, promoted each other's brands and maintained joint reservation systems. At that point, the Vista chain was phased out, while Conrad has been restyled as one of the luxury brands of Hilton (along with The Waldorf-Astoria Collection) and operates hotels within the U.S., as well as abroad.

In 2001, Hilton agreed to sell Red Lion to WestCoast Hospitality.[18]

On December 29, 2005, Hilton Hotels Corporation agreed to re-acquire the Hilton International chain from its British owner, Hilton Group plc, for GBP 3.3 billion (or $5.71 billion). As well as bringing the two Hilton companies back together as a single entity, this deal also included Hilton plc properties operating as Conrad Hotels, Scandic Hotels and LivingWell Health Clubs.[19] On February 23, 2006, the deal closed, making Hilton Hotels the world's fifth largest hotel operator in number of rooms.[20] Hilton Group PLC (headquartered in the UK) then renamed itself Ladbrokes plc. Scandic Hotels was sold the next year on March 1 to EQT Partners.[21]

On July 3, 2007, Hilton Hotels Corp. agreed to an all-cash buyout from the Blackstone Group LP in a $26 billion (including debt) deal that would make Blackstone the world's largest hotel owner.[22] At $47.50 per share, the buyout price was 32 percent higher than the closing value of a share of Hilton stock on July 3.[23] The deal was the culmination of a year of on and off discussions with Blackstone.[24] In October 2007, Christopher J. Nassetta was appointed President and Chief Executive Officer of Hilton.[25] In February 2009, Hilton Hotels Corp., announced that its headquarters were moving from Beverly Hills to Fairfax County, Virginia.

While Blackstone saw an opportunity to streamline the company and push Hilton's expansion overseas when Blackstone pursued Hilton in 2006 and 2007, the buyout saddled the company with $20 billion of debt just as the economy was turning down. The debt had very liberal terms, so there was no danger of default, but when travel slowed, the company suffered. In April 2010, Hilton and Blackstone restructured the debt. Blackstone invested a further $800 million of equity and the debt was reduced to $16 billion.[26]

Hilton returned to being a public company on December 12, 2013. This second IPO in the company's history raised an estimated $2.35 billion.[27] The Blackstone Group retained a 45.8% stake in the company.[28]

It was announced in Q4 2015 that Hilton Worldwide Holdings would turn its hotel holdings into a real estate investment trust. Prior to making the announcement, the company went to the IRS for approval.[29] 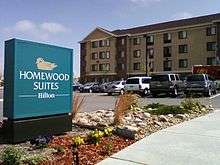 As of 2013, about 70% of the rooms branded under Hilton Worldwide were franchised to independent operators and companies. During its 2007-2013 ownership of Hilton Worldwide, Blackstone Group pursued a strategy of predominantly expanding Hilton's reach through franchise agreements, while relatively few new properties were actually operated by Hilton. Hence, the proportion of franchised rooms grew significantly during this period.[32] The practice of franchising is popular within the hospitality industry among most major hotel chains, as the parent company does not have to pay for the maintenance and overhead costs of franchised properties. Franchisees must follow strict brand standards in order to maintain a licensing agreement with Hilton Worldwide.[32] Most of Hilton's flagship properties, airport properties, and largest resorts, however, are corporately managed.

Hilton HHonors is Hilton's guest loyalty program in which frequent guests can accumulate points and airline miles by staying within the Hilton portfolio. The program is one of the largest of its type,[33] with 50 million members.[34]

The program has seen significant growth in China, which alone saw a 79 percent increase in Hilton HHonors membership in 2011. This was attributed in part to the refining of the brand identity in China, including the addition of a Chinese name and a Chinese website for customers to sign up and redeem their points.[35]

Hilton San Francisco and Towers, the second largest Hilton with over 2,000 rooms

According to Careerbliss.com, Hilton Worldwide ranked first in the '2012 Happiest Companies in America', with a score of 4.36 out of 5.[37] The survey looked at job reviews from more than 100,000 employees such as characteristics like work-life balance, company culture and reputation, and the relationships employees have with their bosses.[38] Additionally, Hilton has scored 100% on the Corporate Equality Index for the past nine years.[39] 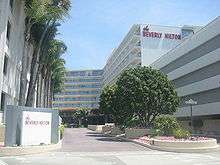 The 671-room Beverly Hilton in Beverly Hills, California is home to the Golden Globe Awards

Keith Richards and Mick Jagger performed in the East Penthouse on the 45th floor of the Hilton New York on October 28, 1965. The piano they used still sits in that room today.[40]

John Lennon and Yoko Ono honeymooned in the presidential suite at the Hilton Amsterdam where they hosted their famous "Bed-In" for a full week in 1969. In 1971, Diamonds Are Forever was filmed at the Flamingo Hilton.

On April 3, 1973, Dr. Martin Cooper made the world's very first cell-phone call in front of the New York Hilton. A mass press-conference would later be held at the hotel the same day to mark the milestone. The Bodyguard with Whitney Houston and Kevin Costner was filmed at the Fontainebleau Hilton in Miami in 1992.

In 1995, the James Bond movie GoldenEye was filmed at the Langham Hilton. Insider was filmed in 1999 at the Seelbach Hilton. In 2006, six movies including Spiderman III, Michael Clayton and American Gangster were filmed at the New York Hilton.[40]

Conrad Hilton (played by actor Chelcie Ross) features as a major character in the third season of Mad Men as lead character Don Draper creates a series of ad campaigns for Hilton Hotels. The Drapers travel during one episode to the Cavalieri Hilton in Rome, though the scenes were actually shot at the Dorothy Chandler Pavilion in Los Angeles.

At the rotating wheel space station in Stanley Kubrick's film 2001: A Space Odyssey, visitors can stay at a Hilton hotel. Hilton's logo appears prominently in the space station's lounge.