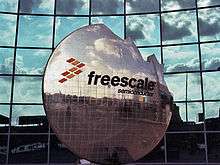 Freescale Semiconductor, Inc. was an American multinational corporation headquartered in Austin, Texas with design, research and development, manufacturing and sales operations in more than 75 locations in 19 countries. The company employed 17,000 people worldwide.

Freescale was one of the first semiconductor companies in the world, having started as a division of Motorola in Phoenix, Arizona in 1948[3] and then becoming autonomous by the divestiture of the Semiconductor Products Sector of Motorola in 2004. In 1955, a Motorola transistor for car radios was the world’s first commercial high-power transistor. It was also Motorola’s first mass-produced semiconductor device.

In the 1960s, one of the U.S. space program's goals was to land a man on the moon and return him safely to Earth. In 1968, NASA began manned Apollo flights that led to the first lunar landing in July 1969. The Apollo program was particularly significant for hundreds of employees involved in designing, testing and producing its electronics. A division of Motorola, which became Freescale Semiconductor, supplied thousands of semiconductor devices, ground-based tracking and checkout equipment, and 12 on-board tracking and communications units. An "up-data link" in the Apollo's command module received signals from Earth to relay to other on-board systems. A transponder received and transmitted voice and television signals and scientific data.[4]

Also that year, Motorola’s technologies were used to introduce the first two-way mobile radio with a fully transistorized power supply and receiver for cars.[5]

Motorola has continued its growth in the networking and communications sector in later years, providing the tools behind the radio transponder that delivered the first words from the moon in 1969, and going on to develop the first prototype of the first analog mobile phone in 1973.[6]

The company’s first microprocessor (MC6800 8-bit) was introduced in 1974, and was used in automotive, computing and video game applications.[7]

Motorola’s next generation 32-bit microprocessor, the MC68000, led the wave of technologies that spurred the computing revolution in 1984, powering devices from companies such as Apple, Commodore, Atari, Sun, and Hewlett-Packard.[8]

Since then, Freescale continued to provide the technology behind consumer, medical, networking and automotive products from microprocessors for the world’s first tubing-free wireless insulin pump,[10] to and automotive microcontrollers for efficient engine design. Freescale’s motion-sensing accelerometer powers the interactivity of the Guitar Hero video games.[11] The number one provider of eReader processors worldwide was Freescale.[12] In 2009, Freescale demonstrated the world's lowest startup voltage single inductor DC/DC converter for use in solar and thermoelectric energy harvesting applications.[13]

Also in 2011, Freescale announced the company's first magnetometer for location tracking in smart mobile devices.[15] With the partnership of McLaren Electronic Systems, they helped the NASCAR Sprint Cup Series vehicles convert from carburetors to fuel injection starting in 2012.[16][17][18]

On March 8, 2014, Freescale announced that 20 of its employees were passengers aboard Malaysia Airlines Flight 370. That plane, carrying the Freescale employees, was lost,[19] with only small part of it found over a year later.

In March 2015, a merger agreement was announced through which Freescale Semiconductor would be acquired by NXP Semiconductors and that the companies would be merged to form a US$40 billion company.[20][21] The acquisition closed on December 7, 2015.

On February 26, 2013, Freescale Semiconductor announced the creation of the world’s physically smallest ARM-powered chip. The Kinetis KL02 measures 1.9 by 2 millimeters and is a full microcontroller unit (MCU), meaning the chip sports a processor, RAM, ROM, clock and I/O control unit. The chip competes with the Atmel M0+ offerings, which are the low-power leaders in the industry.[22] One application that Freescale says the chips could be used for is swallowable computers. Freescale already works with a variety of health and wellness customers. Both the Fitbit and OmniPod insulin pump use Freescale chips. The new chip was on display at 'Embedded World' in Nuernberg, Germany, from February 26–28, 2013.[23]

In August 2014, Freescale Semiconductor introduced a range of fully programmable wireless charging chip and reference designs for consumer and automotive applications. The new chipset is certified to work with both the Wireless Power Consortium's Qi wireless standard and the Power Matters Alliances charging specifications.[24]

Motorola announced that their semiconductor division would be divested on October 6, 2003 to create Freescale. Freescale completed its IPO on July 16, 2004.

On September 15, 2006, Freescale agreed to a $17.6 billion buyout by a consortium led by Blackstone Group and its co-investors, Carlyle Group, TPG Capital, and Permira.[26] The buyout offer was accepted on November 13, 2006 following a vote by company shareholders. The purchase, which closed on December 1, 2006, was the largest private buyout of a technology company until the Dell buyout of 2013 and is one of the ten largest buyouts of all time.[27]

Freescale filed to go public on February 11, 2011 and completed its IPO on May 26, 2011. Freescale is traded on the New York Stock Exchange under the ticker symbol FSL. At the time of the IPO, the company had $7.6 billion in outstanding debt on its books,[28] and the company is being investigated for misconduct related to this IPO.[29]

Freescale is being sued by Marvell Semiconductor for infringing seven patents held by Marvell. The case is being litigated in the US District Court for the West District of Texas.[30] Freescale recently lost a patent infringement lawsuit filed by Tessera Corporation and was forced to pay an undisclosed amount as part of the settlement.[31]