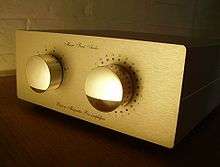 An example of a typical high-end stereo preamplifier.

A preamplifier (preamp) is an electronic amplifier that prepares a small electrical signal for further amplification or processing. They are typically used to amplify signals from microphones, instrument pickups, and phonographs to line level. Preamplifiers are often integrated into the audio inputs on mixing consoles, DJ mixers, and sound cards. They can also be stand-alone devices.

In a home audio system, the term 'preamplifier' may sometimes be used to describe equipment which merely switches between different line level sources and applies a volume control, so that no actual amplification may be involved. In an audio system, the second amplifier is typically a power amplifier (power amp). The preamplifier provides voltage gain (e.g., from 10 mV to 1 V) but no significant current gain. The power amplifier provides the higher current necessary to drive loudspeakers.