Not to be confused with Android TV.

Google TV was a smart TV platform from Google co-developed by Intel, Sony, and Logitech that was launched in October 2010[1] with official devices initially made by Sony and Logitech.[2] Google TV integrates the Android operating system and the Google Chrome web browser to create an interactive television overlay on top of existing online video sites to add a 10-foot user interface, for a smart TV experience.

Google TV's first generation devices were all based on x86 architecture processors and were created and commercialized by Sony and Logitech. The second generation of devices are all based on ARM architecture processors and with additional partners including LG, Samsung,[3] Vizio and Hisense. In 2013, more second generation Google TV-supported devices were announced by new partners, including Hisense, Netgear, TCL, and Asus, some of which including 3D video support.

Google TV was succeeded in June 2014 by Android TV, a new platform which shares closer ties with the Android platform (in particular, Android 5.0) and has a revamped user experience integrating with Knowledge Graph, and providing casting support from mobile devices.[4] While a "small subset" of Google TV devices will be upgraded to the Android TV platform, the majority will not. In June 2014, the Google TV SDK was pulled, ending any future software development for existing devices and effectively deprecating the platform.[5]

Google TV leverages many of Google’s existing products. Google TV’s operating system, a customized version of Android, provides the underlying foundation, allowing developers to create applications that extend the system’s functionality. Google’s Chrome browser provides a gateway to the Internet, allowing consumers to browse web sites and watch television, in tandem. Consumers can access HBO, CNBC, and content from other providers through the Chrome browser. Android and Apple smartphones and tablet computers may be used as remote controls for Google TV. Google TV products ship with wireless remote controls with a full QWERTY keypad. An update in November 2011, allowed access to Google Play and enabled search to find content from live TV, Netflix, YouTube, HBO GO, Amazon, and more.[6]

Xyologic has compiled a list of the early Google TV apps with the largest number of installations.[7] As of November 2012, the most installed apps are Napster, Pandora Radio and CNBC. 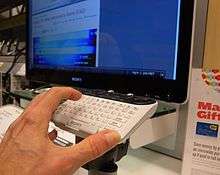 Cable providers as well as content providers have been slow to warm to Google TV. NBC, ABC, Fox,[53] CBS and Hulu have blocked Google TV enabled devices from accessing their web content since Google TV's launch.[54] As of November 22, 2010, Google TV devices are blocked from accessing any programs offered by Viacom’s subsidiaries.[55] Of the cable and satellite providers, only Dish Network (formerly Echostar), had embraced Google TV and promoted it by offering customers a discount on the Logitech Revue.[56]