Not to be confused with homoeologous chromosomes. 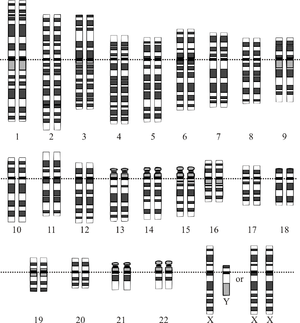 As this karyotype displays, a diploid human cell contains 23 pairs of homologous chromosomes. The cell has two sets of each chromosome; one of the pair is derived from the mother and the other from the father. The maternal and paternal chromosomes in a homologous pair have the same genes at the same loci, but possibly different alleles.

A couple of homologous chromosomes, or homologs, are a set of one maternal and one paternal chromosomes that pair up with each other inside a cell during meiosis. These copies have the same genes in the same loci where they provide points along each chromosome which enable a pair of chromosomes to align correctly with each other before separating during meiosis.[1] This is the basis for Mendelian inheritance which characterizes inheritance patterns of genetic material from an organism to its offspring parent developmental cell at the given time and area.[2]

Early in the 1900s William Bateson and Reginald Punnett were studying genetic inheritance and they noted that some combinations of alleles appeared more frequently than others. That data and information was further explored by Thomas Morgan. Using test cross experiments, he revealed that, for a single parent, the alleles of genes near to one another along the length of the chromosome move together. Using this logic he concluded that the two genes he was studying were located on homologous chromosomes. Later on during the 1930s Harriet Creighton and Barbara McClintock were studying meiosis in corn cells and examining gene loci on corn chromosomes.[2] Creighton and McClintock discovered that the new allele combinations present in the offspring and the event of crossing over were directly related.[2] This proved intrachromosomal genetic recombination.[2]

The actual length of the arm, in accordance with the gene locations, is critically important for proper alignment. Centromere placement can be characterized by four main arrangements, consisting of being either metacentric, submetacentric, telocentric, or acrocentric. Both of these properties are the main factors for creating structural homology between chromosomes. Therefore, when two chromosomes of the exact structure exist, they are able to pair together to form homologous chromosomes.[5]

Since homologous chromosomes are not identical and do not originate from the same organism, they are different from sister chromatids. Sister chromatids result after DNA replication has occurred, and thus are identical, side-by-side duplicates of each other.[6]

Homologous chromosomes are important in the processes of meiosis and mitosis. They allow for the recombination and random segregation of genetic material from the mother and father into new cells.[8] 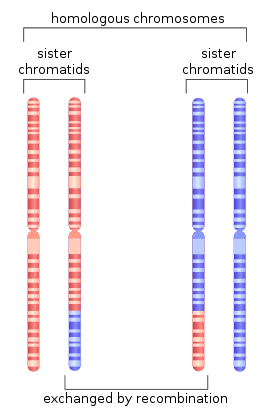 During the process of meiosis, homologous chromosomes can recombine and produce new combinations of genes in the daughter cells. 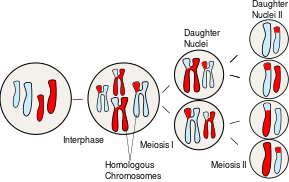 Sorting of homologous chromosomes during meiosis.

Meiosis is a round of two cell divisions that results in four haploid daughter cells that each contain half the number of chromosomes as the parent cell.[9] It reduces the chromosome number in a germ cell by half by first separating the homologous chromosomes in meiosis I and then the sister chromatids in meiosis II. The process of meiosis I is generally longer than meiosis II because it takes more time for the chromatin to replicate and for the homologous chromosomes to be properly oriented and segregated by the processes of pairing and synapsis in meiosis I.[6] During meiosis, genetic recombination (by random segregation) and crossing over produces daughter cells that each contain different combinations of maternally and paternally coded genes.[9] This recombination of genes allows for the introduction of new allele pairings and genetic variation.[2] Genetic variation among organisms helps make a population more stable by providing a wider range of genetic traits for natural selection to act on.[2]

In metaphase I of meiosis I, the pairs of homologous chromosomes, also known as bivalents or tetrads, line up in a random order along the metaphase plate.[9] The random orientation is another way for cells to introduce genetic variation. Meiotic spindles emanating from opposite spindle poles attach to each of the homologs (each pair of sister chromatids) at the kinetochore.[7]

Homologous chromosomes do not function the same in mitosis as they do in meiosis. Prior to every single mitotic division a cell undergoes, the chromosomes in the parent cell replicate themselves. The homologous chromosomes within the cell will not pair up and undergo genetic recombination with each other.[9] Instead, the replicants, or sister chromatids, will line up along the metaphase plate and then separate in the same way as meiosis II - by being pulled apart at their centromeres by nuclear mitotic spindles.[10] If any crossing over does occur between sister chromatids during mitosis, it does not produce any recombinants.[2]

There are severe repercussions when chromosomes do not segregate properly. Faulty segregation can lead to fertility problems, embryo death, birth defects, and cancer.[11] Though the mechanisms for pairing and adhering homologous chromosomes vary among organisms, proper functioning of those mechanisms is imperative in order for the final genetic material to be sorted correctly.[11]

Proper homologous chromosome separation in meiosis I is crucial for sister chromatid separation in meiosis II.[11] A failure to separate properly is known as nondisjunction. There are two main types of nondisjunction that occur: trisomy and monosomy. Trisomy is caused by the presence of one additional chromosomes in the zygote as compared to the normal number, and monosomy is characterized by the presence of a one less chromosome in the zygote as compared to the normal number. If this uneven division occurs in meiosis I, then none of the daughter cells will have proper chromosomal distribution and severe effects can ensue, including Down’s syndrome.[12] Unequal division can also occur during the second meiotic division. Nondisjunction which occurs at this stage can result in normal daughter cells and deformed cells.[4]

If unequal genetic crossover occurs within the gametes involved in meiosis, then the resulting zygote may suffer unviability.[4] This is caused by events such as trisomy and monosomy because the cells are not able to develop normally with these characteristics. In other terms, one cell gains the proper amount of genetic material while the other cell lacks that material.[12] Consequently, these deformed cells may cause a spontaneous abortion because the zygote does not develop correctly.[12] 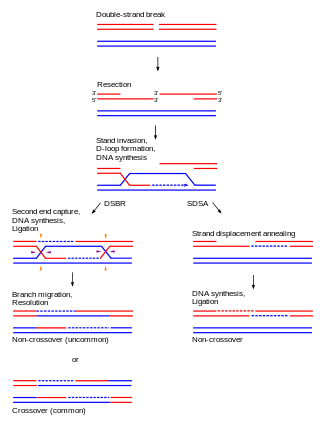 Diagram of the general process for double-stranded break repair as well as synthesis-dependent strand annealing.

While the main function of homologous chromosomes is their use in nuclear division, they are also used in repairing double-strand breaks of DNA.[13] These double-stranded breaks typically occur in DNA that serve as template strands for DNA replication, and they are the result of mutation, replication errors or malfunctioning DNA.[14] Homologous chromosomes can repair this damage by aligning themselves with chromosomes of the same genetic sequence.[13] Once the base pairs have been matched and oriented correctly between the two strands, the homologous chromosomes perform a process that is very similar to recombination, or crossing over as seen in meiosis. Part of the intact DNA sequence overlaps with that of the damaged chromosome's sequence. Replication proteins and complexes are then recruited to the site of damage, allowing for repair and proper replication to occur.[14] Through this functioning, double-strand breaks can be repaired and DNA can function normally.[13]

There is ongoing research concerning the ability of homologous chromosomes to repair double-strand DNA breaks. Researchers are investigating the possibility of exploiting this capability for regenerative medicine.[16] This medicine could be very prevalent in relation to cancer, as DNA damage is thought to be contributor to carcinogenesis. Manipulating the repair function of homologous chromosomes might allow for bettering a cell’s damage response system. While research has not yet confirmed the effectiveness of such treatment, it may become a useful therapy for cancer.[17]