Diploid cells have two homologous copies of each chromosome.

Ploidy is the number of sets of chromosomes in a cell. Usually a gamete (sperm or egg, which fuse into a single cell during the fertilization phase of sexual reproduction) carries a full set of chromosomes that includes a single copy of each chromosome, as aneuploidy generally leads to severe genetic disease in the offspring. The gametic or haploid number (n) is the number of chromosomes in a gamete. Two gametes form a diploid zygote with twice this number (2n, the zygotic or diploid number) i.e. two copies of autosomal chromosomes. For humans, a diploid species, n = 23. A typical human somatic cell contains 46 chromosomes: 2 complete haploid sets, which make up 23 homologous chromosome pairs.

Because chromosome number is generally reduced only by the specialized process of meiosis, the somatic cells of the body inherit and maintain the chromosome number of the zygote. However, in many situations somatic cells double their copy number by means of endoreduplication as an aspect of cellular differentiation. For example, the hearts of two-year-old children contain 85% diploid and 15% tetraploid nuclei, but by 12 years of age the proportions become approximately equal, and adults examined contained 27% diploid, 71% tetraploid and 2% octaploid nuclei.[1]

The term ploidy is a back-formation from haploid and diploid. These two terms are from Greek ἁπλόος haplóos "single" and διπλόος diplóos "double" combined with εἶδος eîdos "form" (compare idol from Latin īdōlum, that from Greek εἴδωλον eídōlon derived from εἶδος eîdos). Eduard Strasburger, who coined the terms haploid and diploid, based on Weismann's conception of the id (or germ plasm),[4][5] used diploid to refer to an organism with twice the number of chromosomes of a haploid organism, hence "double" and "single". The two terms were borrowed from German through William Henry Lang's 1908 translation of an 1906 textbook by Strasburger and colleagues.[6]

Technically, ploidy is a description of a nucleus. Though at times authors may report the total ploidy of all nuclei present within the cell membrane of a syncytium,[7] usually the ploidy of the nuclei present will be described. For example, a fungal dikaryon with two haploid nuclei is distinguished from the diploid in which the chromosomes share a nucleus and can be shuffled together.[8] Nonetheless, because in most situations there is only one nucleus, it is commonplace to speak of the ploidy of a cell.

It is also possible on rare occasions for the ploidy to increase in the germline, which can result in polyploid offspring and ultimately polyploid species. This is an important evolutionary mechanism in both plants and animals.[9] As a result, it becomes desirable to distinguish between the ploidy of a species or variety as it presently breeds and that of an ancestor. The number of chromosomes in the ancestral (non-homologous) set is called the monoploid number (x), and is distinct from the haploid number (n) in the organism as it now reproduces. Both numbers n, and x, apply to every cell of a given organism.

Over evolutionary time scales in which chromosomal polymorphisms accumulate, these changes become less apparent by karyotype - for example, humans are generally regarded as diploid, but the 2R hypothesis has confirmed two rounds of whole genome duplication in early vertebrate ancestors.

Ploidy can also differ with life cycle.[11][12] In some insects it differs by caste. In humans, only the gametes are haploid, but in the Australian bulldog ant, Myrmecia pilosula, a haplodiploid species, haploid individuals of this species have a single chromosome, and diploid individuals have two chromosomes.[13] In Entamoeba, the ploidy level varies from 4n to 40n in a single population.[14] Alternation of generations occurs in many plants.

Some studies suggest that selection is more likely to favor diploidy in host species and haploidy in parasite species.[15] 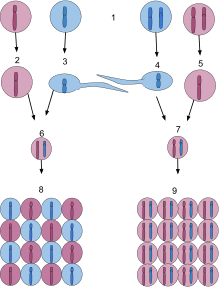 All plants and many fungi and algae switch between a haploid and a diploid state, with one of the stages emphasized over the other. This is called alternation of generations. Most fungi and algae are haploid during the principal stage of their lifecycle, as are plants like mosses. Most animals are diploid, but male bees, wasps, and ants are haploid organisms because they develop from unfertilized, haploid eggs.

In some cases there is evidence that the n chromosomes in a haploid set have resulted from duplications of an originally smaller set of chromosomes. This "base" number – the number of apparently originally unique chromosomes in a haploid set – is called the monoploid number,[16] also known as basic or cardinal number,[17] or fundamental number.[18][19] As an example, the chromosomes of common wheat are believed to be derived from three different ancestral species, each of which had 7 chromosomes in its haploid gametes. The monoploid number is thus 7 and the haploid number is 3 × 7 = 21. In general n is a multiple of x. The somatic cells in a wheat plant have six sets of 7 chromosomes: three sets from the egg and three sets from the sperm which fused to form the plant, giving a total of 42 chromosomes. As a formula, for wheat 2n = 6x = 42, so that the haploid number n is 21 and the monoploid number x is 7. The gametes of common wheat are considered to be haploid, since they contain half the genetic information of somatic cells, but they are not monoploid, as they still contain three complete sets of chromosomes (n = 3x).[20]

In the case of wheat, the origin of its haploid number of 21 chromosomes from three sets of 7 chromosomes can be demonstrated. In many other organisms, although the number of chromosomes may have originated in this way, this is no longer clear, and the monoploid number is regarded as the same as the haploid number. Thus in humans, x = n = 23.

For other uses, see Diploid (crystallography).

Diploid cells have two homologous copies of each chromosome, usually one from the mother and one from the father. Nearly all mammals are diploid organisms (the tetraploid (four sets) plains viscacha rats (Tympanoctomys barrerae) and golden vizcacha rat (Pipanacoctomys aureus)[21] are the only known exceptions as of 2004[22]), although all individuals have some small fraction of cells that display polyploidy. Human diploid cells have 46 chromosomes (the somatic number, 2n) and human haploid gametes (egg and sperm) have 23 chromosomes (n). Retroviruses that contain two copies of their RNA genome in each viral particle are also said to be diploid. Examples include human foamy virus, human T-lymphotropic virus, and HIV.[23]

Polyploidy is the state where all cells have multiple sets of chromosomes beyond the basic set, usually 3 or more. Specific terms are triploid (3 sets), tetraploid (4 sets), pentaploid (5 sets), hexaploid (6 sets), heptaploid[2] or septaploid[3] (7 sets) octoploid (8 sets), nonaploid (9 sets), decaploid (10 sets), undecaploid (11 sets), dodecaploid (12 sets), tridecaploid (13 sets), tetradecaploid (14 sets) etc.[26][27][28][29] Some higher ploidies include hexadecaploid (16 sets), dotriacontaploid (32 sets), and tetrahexacontaploid (64 sets),[30] though Greek terminology may be set aside for readability in cases of higher ploidy (such as "16-ploid").[28] Polytene chromosomes of plants and fruit flies can be 1024-ploid.[31][32] Ploidy of systems such as the salivary gland, elaiosome, endosperm, and trophoblast can exceed this, up to 1048576-ploid in the silk glands of the commercial silkworm Bombyx mori.[7]

The chromosome sets may be from the same species or from closely related species. In the latter case, these are known as allopolyploids (or amphidiploids, which are allopolyploids that behave as if they were normal diploids). Allopolyploids are formed from the hybridization of two separate species. In plants, this probably most often occurs from the pairing of meiotically unreduced gametes, and not by diploid–diploid hybridization followed by chromosome doubling.[33] The so-called Brassica triangle is an example of allopolyploidy, where three different parent species have hybridized in all possible pair combinations to produce three new species.

Polyploidy occurs commonly in plants, but rarely in animals. Even in diploid organisms, many somatic cells are polyploid due to a process called endoreduplication where duplication of the genome occurs without mitosis (cell division).

The extreme in polyploidy occurs in the fern genus Ophioglossum, the adder's-tongues, in which polyploidy results in chromosome counts in the hundreds, or, in at least one case, well over one thousand.

It is also possible for polyploid organisms to revert to lower ploidy by means of haploidisation.

Depending on growth conditions, prokaryotes such as bacteria may have a chromosome copy number of 1 to 4, and that number is commonly fractional, counting portions of the chromosome partly replicated at a given time. This is because under exponential growth conditions the cells are able to replicate their DNA faster than they can divide.

In ciliates, the macronucleus is called ampliploid, because only part of the genome is amplified.[34]

Mixoploidy refers to the presence of two cell lines, one diploid and one polyploid, coexisting within the same organism. Though polyploidy in humans is not viable, mixoploidy has been found in live adults and children.[35] There are two types: diploid-triploid mixoploidy, in which some cells have 46 chromosomes and some have 69,[36] and diploid-tetraploid mixoploidy, in which some cells have 46 and some have 92 chromosomes. It is a major topic of cytology.

Not to be confused with haplodiploidy (where diploid and haploid individuals are different sexes).

Dihaploid and polyhaploid cells are formed by haploidisation of polyploids, i.e., by halving the chromosome constitution.

Dihaploids (which are diploid) are important for selective breeding of tetraploid crop plants (notably potatoes), because selection is faster with diploids than with tetraploids. Tetraploids can be reconstituted from the diploids, for example by somatic fusion.

The term “dihaploid” was coined by Bender[37] to combine in one word the number of genome copies (diploid) and their origin (haploid). The term is well established in this original sense,[38][39] but it has also been used for doubled monoploids or doubled haploids, which are homozygous and used for genetic research.[40]

Euploidy is the state of a cell or organism having one or more than one set of the same set of chromosomes, possibly excluding the sex-determining chromosomes. For example, most human cells have 2 of each of the 23 homologous monoploid chromosomes, for a total of 46 chromosomes. A human cell with an extra set out of the 23 normal ones would be considered euploid. Euploid karyotypes would consequentially be a multiple of the haploid number, which in humans is 23. Aneuploidy is the state where one or more chromosomes of a normal set are missing or present in more than their usual number of copies. Unlike euploidy, aneuploid karyotypes will not be a multiple of the haploid number. In humans, examples of anueploidy include having a single extra chromosome (such as Down syndrome), or missing a chromosome (such as Turner syndrome). Aneuploid karyotypes are given names with the suffix -somy (rather than -ploidy, used for euploid karyotypes), such as trisomy and monosomy.

Possible adaptive and ecological significance of variation in ploidy

A study comparing the karyotypes of endangered or invasive plants with those of their relatives found that being polyploid as opposed to diploid is associated with a 14% lower risk of being endangered, and a 20% greater chance of being invasive.[41] Polyploidy may be associated with increased vigor and adaptability.[42]

Some eukaryotic genome-scale or genome size databases and other sources which may contain the ploidy of many organisms: