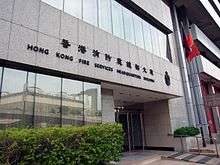 Hong Kong Fire Services Department (HKFSD，Chinese: 消防處) of the Hong Kong Government is an emergency service responsible for fire-fighting and rescue on land and sea. It also provides an emergency ambulance service for the sick and the injured, and gives fire protection advice to the public. 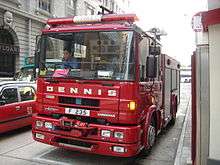 Flag of Fire Services Department before 1997. Note the use of the British Crown

Badge of Fire Services Department before 1997.

The history of the Hong Kong Fire Service began in the Government Gazette dated May 9, 1868. Charles May became the first Superintendent of the Fire Brigade. At the time, the Fire Department was part of the Hong Kong Police Force in 1846. It had a total strength of 62 with a supplement of 100 Chinese volunteers. The fire department expanded to 140 members during the 1920s. During the Japanese Occupation during the World War II, the Service disbanded. The two fire engines were exported to Tokyo to become part of the Imperial Palace Fire Unit. It was only returned after the War. Unlike Canada, UK and some countries, Hong Kong's ambulance service is tied directly with the Fire Department. At that time all emergency ambulance service was provided by the Fire Service while non-emergency was handled by the Medical Corps. In 1950 Auxiliary Fire Service Unit was created to establish the Hong Kong Auxiliary Fire Brigade to provide additional manpower to regular fire brigade members under the Essential Services (Auxiliary Fire Service) Corps Regulations.

In 1953, this policy was changed and all Medical Corps vehicles and crew were transferred to the Fire Service. Thus, leading to the creation to the present Ambulance Command. Over the past 50 years it has grown to accommodate 30 ambulance depots, 240 ambulances, 35 motorcycles and 2,350 uniformed staff.

The department has 9,351 (8,675 uniformed and 676 civilian) members. It is organised into seven commands － three operational commands, a Licensing and Certification Command, a Fire Safety Command, an Ambulance Command and a Headquarters Command. They are supported by an Administration Division. Commanding the department is the Director of Fire Services.

Fire-fighting, rescue and other emergency services are undertaken by the three operational commands － Hong Kong (including marine and off-shore islands), Kowloon and the New Territories. There are 81 fire stations across Hong Kong's 3 operational commands. In 2004, they responded to 35,092 fire calls and 20,059 special service calls. Careless handling or disposal of cigarette ends, matches and candles remained the major causes of fires, followed by incidents involving the preparation of food and electrical faults. Fires claimed nine lives and 451 injuries in 2004. Of the injured, 46 were Fire Services personnel. Special service calls cover a wide range of incidents, including traffic and industrial accidents, gas leakages, landslides, flooding, house collapses, attempts by people to jump from a height and malfunctioning lifts. In 2004, 717 people died and 1,995 others were injured in such incidents. One of the dead and 16 of the injured were Fire Services personnel. The department has 835 operational appliances and vehicles fitted with up-to-date fire-fighting and rescue equipment. The first-line appliances, basically comprising major pumps, hydraulic platforms, light rescue units and turntable ladders/snorkels, are supported where necessary by other special appliances/equipment. A fleet of eight fireboats, including two command boats, one diving support vessel and two diving support speedboats provide fire protection and rescue services within Hong Kong

The Ambulance Command operates from 38 depots with 2,350 uniformed staff. The services fleet consists of 268 ambulances, four village ambulances, four mobile casualty treatment centres and 35 paramedic motorcycles. All motorcycles and ambulances are equipped with paramedic facilities to provide paramedic care. In 2004, the Command responded to 574,901 calls, conveying a total of 521,127 patients or casualties to hospitals/clinics, or an average of 1 575 calls a day. There were 106 cases of ambulance personnel sustaining injury whilst on active duty in 2004. Front-line firemen are also trained as first-responders to provide basic life support to casualties and patients before the arrival of an ambulance crew. So far, first-responders are available in 81 fire stations.

The Fire Services Communication Centre (FSCC) is equipped with a computerised mobilising system for the efficient and effective mobilising of fire-fighting and ambulance resources for fires and emergencies. It is linked to all fire stations, ambulance depots and fireboat stations for dispatch of resources. The FSCC, manned round the clock, also caters for receipt of complaints and enquiries of fire hazards and dangerous goods. During major incidents, it acts as a co-ordinator for government departments and public utilities. The FSCC has five Mobile Command Units which serve as on-scene command and control centres in major incidents. The Third Generation Mobilising System came into operation in phases starting in the first quarter of 2005. The system's objective is to further enhance the capability and efficiency in mobilisation and communications to meet anticipated growth of emergency calls over the next decade.

The Licensing and Certification Command enforces fire safety regulations and policies, and processes the registration of fire service installation contractors. The Policy Division deals mainly with the formulation of guidelines on fire protection matters, prosecutions, research and approval of portable fire-fighting equipment and gas cylinders. The New Projects Division, in co-operation with the Building Authority and other government departments, is responsible for vetting new building plans including projects on mass transit systems, tunnels, bridges and airport, as well as formulating fire protection requirements appropriate to relevant premises and risks. The Dangerous Goods Division is responsible for the licensing of dangerous goods stores and vehicles, and timber stores. The Fire Service Installations Division and Ventilation Division are responsible for inspecting fire service installations and ventilating systems in buildings respectively. The two regional offices － the Hong Kong and Kowloon West and the New Territories and Kowloon East － are responsible for advising other government authorities on the fire safety measures for the purposes of licensing/registering various types of premises. Officers of the Command are seconded to the Home Affairs Department to inspect hotels, guesthouses, private clubs and bedspace apartments, and formulate fire safety requirements on these premises; whereas some are seconded to the Social Welfare Department to advise on fire protection measures in residential care homes for the elderly.

The Fire Safety Command assists and advises the public on fire protection measures with the aim of enhancing their fire safety awareness. The Community Relations Division is responsible for promoting fire safety and co-ordinating with other government departments and District Fire Safety Committees in stepping up fire prevention publicity. To promote fire safety awareness at district levels, the Division works closely with local fire stations in organising fire safety talks, seminars, exhibitions, fire drills and training of Fire Safety Ambassadors, who are volunteers from various sectors of the community to raise awareness of fire safety. The Commercial Buildings and Premises Division enforces the Fire Safety (Commercial Premises) Ordinance for upgrading fire safety measures in prescribed commercial premises (i.e. supermarkets, department stores, shopping arcades, banks, jewelry or goldsmith premises and off-course betting centres) and specified commercial buildings (i.e. commercial buildings constructed or the plans of building works of which first submitted to the Building Authority for approval on or before March 1, 1987). A Building Safety Loan Scheme has also been established to provide financial assistance to owners of such premises and buildings to upgrade the fire safety measures where necessary. Pending implementation of the Fire Safety (Buildings) Ordinance, the Building Improvement and Support Division continues to inspect old private composite and domestic buildings with a view to enhancing fire safety and advising owners and occupiers concerned on the improved standards to be required. The Fire Service Installation Task Force inspects fire service installations in buildings, handles complaints regarding building fire service installations and monitors the performance of registered fire service installation contractors. The Railway Development Strategy Division scrutinises fire safety strategies and processes building plans of new railway infrastructure projects. It also carries out acceptance tests of fire service installations on completion of those projects. The Theme Park Projects Division formulates fire safety requirements for buildings and other supporting infrastructures in the Hong Kong Disneyland theme park in Penny's Bay. It also carries out acceptance tests on fire service installations upon completion of these works.

The primary role of the contingent is to provide rescue and fire fighting coverage for Hong Kong International Airport. The contingent, which comprises two fire stations (one next to DHL Asia Hub and one on Airport Road at Cathay Pacific City) and two sea rescue berths (east and west ends of Chep Lap Kok) at strategic locations on the airport platform, is equipped with 14 fire appliances, two command boats and eight speedboats.

The Diving Unit has a fleet of five diving tenders, one diving support vessel and two diving support speedboats deployed at seven strategic locations throughout Hong Kong, and a three-compartment compression chamber at Stonecutter's Island for treating patients suffering from decompression illness and requiring hyperbaric oxygen treatment. It comprises about 150 active divers responsible for maritime search and rescue within Hong Kong waters down to the maximum depth of 42 metres using compressed air diving equipment and underwater breaking-in tools.

The Workshops Division is responsible for all engineering matters relating to fire appliances, fire-fighting and rescue equipment. These include design, development, procurement, inspection and maintenance, fitting out, modification, testing and commissioning.

The group which comprises 30 members of the public from all walks of life monitors and improves the delivery of the department's public services. It helps foster better understanding between the public and the department.

The Fire Services Department of Hong Kong is a force of 8000-plus firefighters serving one of the most densely populated urban areas in the world. They served under the British before 1997 and are equipped much like their counterparts in the United Kingdom. While most cities' high-rise buildings are concentrated in their commercial areas in the central business districts, they are ubiquitous in Hong Kong. Most residential buildings in this very crowded Asian metropolis are more than twenty storeys tall, with some reaching forty or fifty storeys and the tallest over seventy. Thanks to strict fire code and the use of non-flammable materials, severe structural fires are rare. The Fire Services Department is nonetheless equipped with a significant quantity of hydraulic platforms and possesses some of the tallest ladder platforms in the world. Common fire engines in Hong Kong include:

The following appliances are mainly deployed to the airport and stations close to fuel depots:

A list of vehicles used in the past and present:

For funerals Turntable Ladder with turntable unit removed is used to carry the coffin.

For other ranks, the name of the station are printed on both sides of the helmet e.g. Shek Kip Mei - SKM on the sides of the helmet. All station names abbreviations are in letters form. However, this does not apply to officers as their rank is shown by stars and pipes on the side of their helmet, unlike other ranks who display their rank as thin lines on their helmets.

The current Fire Service crest was adopted in 1997 to replace the pre-handover crest due to presence of colonial elements. The changes impacted both uniforms (lapels, buttons, helmets, caps), vehicles, flags and other signage.

As the crest was also used on the flag, it too was changed in 1997. The old red flag was replaced by a purple flag with the new crest. This flag is only flown at Headquarters, whereas the Flag of the Hong Kong Special Administrative Region flies at all fire stations.

Fire Services on TV and film

The FS has been portrayed in a number of Hong Kong TV series and films: