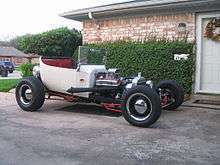 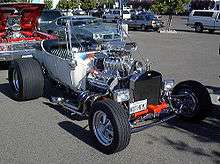 T-bucket with early hemi, but aluminum radiator (rather than brass), rectangular headlights, and five-spokes (rather than motorcycle wheels) mark this as a later incarnation. 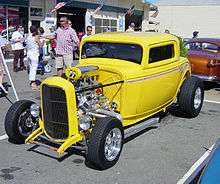 Hot rods are typically old, classic American cars with large engines modified for linear speed. The origin of the term "hot rod" is unclear. Some automotive historians say that the term originated with stolen vehicles being refitted with another engine and repainted. In the early days of automobile manufacturing there was no identical matching transmission, body frame, and engine numbers. It was possible to change engines and repaint the car or truck and in effect turn it into a different vehicle and thus it became near impossible to prove that the vehicle was stolen. The term "hot" was equivalent to being stolen. The term "rod" was equivalent to any motorized vehicle. Even today, the Ontario Ministry of the Environment in its vehicle emissions regulations, refers to a "hotrod" as any motorized vehicle that has a replacement engine differing from the factory original. [2] Another possible origin includes replacement of the camshaft with a new ("hotter") version, sometimes known as a hot stick or hot rod. Roadsters were the cars of choice because they were light, easy to modify, and inexpensive. The term became commonplace in the 1930s or 1940s as the name of a car that had been "hopped up" by modifying the engine for higher performance. A term common in the early days was "gow job". This has fallen into disuse except with historians.

The term has broadened to apply to other items that are modified for a particular purpose, such as "hot-rodded amplifier".

The term seems first to have appeared in the late 1930s in southern California, where people raced modified cars on dry lake beds northeast of Los Angeles under the rules of the Southern California Timing Association (SCTA), among other groups. The activity increased in popularity after World War II, particularly in California, because many returning soldiers received technical training in the service. Many cars were prepared by bootleggers in response to Prohibition to enable them to avoid revenue agents ("Revenooers"); some police vehicles were also modified in response.[3]

The first hot rods were old cars (most often Fords, typically Model Ts, 1928–31 Model As, or 1932-34 Model Bs), modified to reduce weight. Typical modifications were removal of convertible tops, hoods, bumpers, windshields, and/or fenders; channeling the body; and modifying the engine by tuning and/or replacing with a more powerful type. Speedster was a common name for the modified car. Wheels and tires were changed for improved traction and handling. "Hot rod" was sometimes a term used in the 1950s as a derogatory term for any car that did not fit into the mainstream. Hot rodders' modifications were considered to improve the appearance as well, leading to show cars in the 1960s replicating these same modifications along with a distinctive paint job. 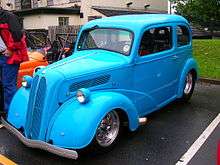 After World War II there were many small military airports throughout the country that were either abandoned or rarely used that allowed hot rodders across the country to race on marked courses. Originally drag racing had tracks as long as one mile (1.6 km) or more, and included up to four lanes of racing simultaneously. As hot rodding became more popular in the 1950s, magazines and associations catering to hot rodders were started. These were led by Honk! (which shortly became Hot Rod) and Car Craft. As some hot rodders also raced on the street, a need arose for an organization to promote safety, and to provide venues for safe racing. Hot rodders including Wally Parks created the National Hot Rod Association (NHRA) to bring racing off the streets and onto the tracks. They created rules based on safety and entertainment, and allowed Hot Rodders of any caliber the ability to race. The annual California Hot Rod Reunion and National Hot Rod Reunion are held to honor pioneers in the sport. The Wally Parks NHRA Motorsports Museum houses the roots of hot rodding.

As automobiles offered by the major automakers began increasing performance, the lure of hot rods began to wane. It was no longer necessary to put a Cadillac engine in a Ford roadster to be fast. It was now possible to buy a muscle car that outperformed nearly any hot rod, with more passenger room, and without having to expend the effort of building and tuning the car oneself. After the 1973 Oil Crisis, the public called on automakers to offer safety and fuel efficiency over performance. The resulting decrease in an average car's performance led to a resurgence of hot rodding, although the focus was on driving hot rods over racing so the term 'street rod' was coined to denote a vehicle manufactured prior to 1949, often with a more reliable late model drive train. Street rodding as it was now known was a different phenomenon than hot rodding, as street rodding was mainly family-oriented. National events were hosted by the National Street Rod Association (NSRA), which also stressed safety as the NHRA did 20 years before. Each NSRA event has a 'Safety Inspection Team' that performs a 23-point inspection process beyond normal State Safety Inspections.

In the mid-1980s, as stock engine sizes diminished, rodders discovered the all-aluminum 215 (Buick or Olds) could be stretched to as much as 305 cu in (5 l), using: the Buick 300 crank, new cylinder sleeves, and an assortment of non-GM parts, including VW & Mopar lifters and Carter carb.[7] It could also be fitted with high-compression cylinder heads from the Morgan +8. Using the 5 liter Rover block and crank, a maximum displacement of 317.8 cu in (5,208 cc) is theoretically possible.[8] 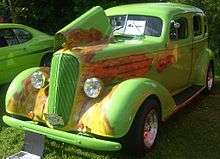 There is still a vibrant hot rod culture worldwide, especially in Canada, the United States, the United Kingdom, Australia and Sweden. The hot rod community has now been subdivided into two main groups: street rodders and hot rodders.

Author Tom Wolfe was one of the first to recognize the importance of hot rodding in popular culture and brought it to mainstream attention in his book The Kandy-Kolored Tangerine-Flake Streamline Baby.

There are magazines that feature traditional hot rods, including Hot Rod, Car Craft, Rod and Custom, and Popular Hot Rodding. There are also television shows such as My Classic Car, Horsepower TV, American Hot Rod, and Chop Cut Rebuild.

In Sweden and Finland 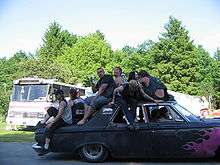 Locals in these countries, influenced by American culture, have created a local hot rod culture which is vibrant in Sweden and Finland where enthusiasts gather at meetings such as Power Big Meet and clubs like Wheels and Wings in Varberg, Sweden have established themselves in Hot Rod culture. Since there is very little "vintage tin" the hot rods in Sweden are generally made with a home made chassis (usually a Model T or A replica), with a Jaguar (or Volvo 240) rear axle, a small block V8, and fiberglass tub, but some have been built using for instance a Volvo Duett chassis. Because the Swedish regulations required a crash test even for custom-built passenger cars between 1969 and 1982, the Duett option was preferred, since it was considered a rebodied Duett rather than a new vehicle.

Some 1950s and 1960s cars are also hot rodded, like Morris Minor, Ford Anglia, Volvo Amazon, Ford Cortina, '57 Chevy, to name but a few. These are known as custom cars (sometimes spelled Kustom).

Certain linguistic conventions are followed among rodders and customizers:

Some terms have an additional, different meaning among customizers than among rodders: NOS, for instance, is a reference to new old stock, rather than nitrous oxide.