It is believed that the term "boot-legging" originated during the American Civil War, when soldiers would sneak liquor into army camps by concealing pint bottles within their boots or beneath their trouser legs. Also, according to the PBS documentary Prohibition, the term "bootlegging" was popularized when thousands of city dwellers would sell liquor from flasks they kept in their boot leg all across major cities and rural areas.[1][2] The term "rum-running" most likely originated at the start of Prohibition in the United States (1920–1933), when ships from Bimini in the western Bahamas transported cheap Caribbean rum to Florida speakeasies. But rum's cheapness made it a low-profit item for the rum-runners, and they soon moved on to smuggling Canadian whisky, French champagne, and English gin to major cities like New York City and Boston, where prices ran high. It was said that some ships carried $200,000 in contraband in a single run. 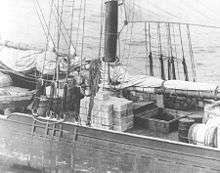 It was not long after the first taxes on alcoholic beverages that someone began to smuggle them. The British government had "revenue cutters" in place to stop smugglers as early as the 16th century. Pirates often made extra money running rum to heavily taxed colonies. There were times when the sale of alcohol was limited for other purposes, such as laws against sales to American Indians in the Old West, Canada West, or local prohibitions like the one on Prince Edward Island between 1901 and 1948.

An irony of the history of prohibition in North America is that industrial-scale smuggling flowed both ways across the Canada–US border at different points in the early twentieth century. Though Canada never had true nationwide prohibition, the federal government gave the provinces an easy means to ban alcohol under the War Measures Act (1914) and most provinces and the Yukon Territory already had enacted prohibition locally by 1918 when a regulation issued by the federal cabinet banned the interprovincial trade and importation of liquor. National prohibition in the United States did not begin until 1920 (though many states had statewide prohibition before that). For the two year interval, enough American liquor entered Canada illegally to help undermine support for prohibition in Canada such that it was slowly lifted, beginning with Quebec and Yukon in 1919, and including all of the provinces but Prince Edward Island by 1930. As well, Canada's version of prohibition had never included a ban on the manufacture of liquor for export. Soon the black-market trade was reversed with Canadian whisky and beer flowing in large quantities to the United States. Again, this illegal international trade undermined the support for prohibition in the receiving country, and the American version ended (at the national level) in 1933.

At first, there was much action on the seas, but after several months the Coast Guard began reporting decreasing smuggling activity. This was the start of the Bimini–Bahamas rum trade and the introduction of Bill McCoy. 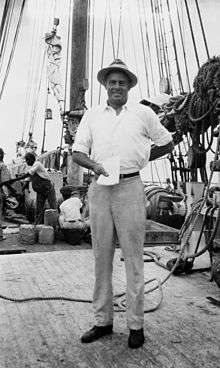 With the start of Prohibition Captain McCoy began bringing rum from Bimini and the rest of the Bahamas into south Florida through Government Cut. The Coast Guard soon caught up with him, so he began to bring the illegal goods to just outside U.S. territorial waters and let smaller boats and other captains such as Habana Joe take the risk of bringing it into shore.

The rum-running business was very good, and McCoy soon bought a Gloucester knockabout schooner named Arethusa at auction and renamed her Tomoka. He installed a larger auxiliary, mounted a concealed machine gun on her deck and refitted the fish pens below to accommodate as much contraband as she could hold. She became one of the most famous of the rum-runners, along with his two other ships hauling mostly Irish and Canadian whiskey, as well as other fine liquors and wines, to ports from Maine to Florida.

In the days of rum running, it was common for captains to add water to the bottles to stretch their profits, or to re-label it as better goods. Any cheap sparkling wine became French champagne or Italian Spumante; unbranded liquor became top-of-the-line name brands. McCoy became famous for never watering his booze, and selling only top brands. Although the phrase appears in print in 1882, this is one of several folk etymologies for the origin of the term "The real McCoy."

On November 15, 1923, McCoy and Tomoka encountered the U.S. Coast Guard Cutter Seneca, just outside U.S. territorial waters. A boarding party attempted to board, but McCoy chased them off with the machine gun. Tomoka tried to run, but the Seneca placed a shell just off her hull, and William McCoy's days as a rum-runner were over.

McCoy is credited with the idea of bringing large boats just to the edge of the three-mile (4.8 km) limit of U.S. jurisdiction, and there selling his wares to "contact boats", local fishermen and small boat captains. The small, quick boats could more easily outrun Coast Guard ships and could dock in any small river or eddy and transfer their cargo to a waiting truck. They were also known to load float planes and flying boats. Soon others were following suit; the three-mile (4.8 km) limit became known as "Rum Line" and the ships waiting were called "Rum row". The Rum Line was extended to a 12-mile (19.3 km) limit by an act of the United States Congress on April 21, 1924, which made it harder for the smaller and less seaworthy craft to make the trip.[3]

Rum Row was not the only front for the Coast Guard. Rum-runners often made the trip through Canada via the Great Lakes and the Saint Lawrence Seaway, and down the west coast to San Francisco and Los Angeles. Rum-running from Canada was also an issue, especially throughout prohibition in the early 1900s. There was a high amount of distilleries in Canada, one of the most famous being Hiram Walker who developed Canadian Club Whisky. The French islands of Saint-Pierre and Miquelon, located south of Newfoundland, were an important base used by well-known smugglers including Al Capone, Savannah Unknown, and Bill McCoy. The Gulf of Mexico also teemed with ships running from Mexico and the Bahamas to Galveston, Texas, the Louisiana swamps and Alabama coast. By far the biggest Rum Row was in the New York/Philadelphia area off the New Jersey coast, where as many as 60 ships were seen at one time. One of the most notable New Jersey rum runners was Habana Joe, who could be seen at night running into remote areas in Raritan Bay with his flat-bottom skiff for running up on the beach, making his delivery, and speeding away.

With that much competition, the suppliers often flew large banners advertising their wares and threw parties with prostitutes on board their ships to draw customers. Rum Row was completely lawless, and many crews armed themselves not against government ships but against the other rum-runners, who would sometimes sink a ship and hijack its cargo rather than make the run to Canada or the Caribbean for fresh supplies.

At the start, the rum-runner fleet consisted of a ragtag flotilla of fishing boats such as the schooner Nellie J. Banks, excursion boats, and small merchant craft. But as prohibition wore on, the stakes got higher and the ships became larger and more specialized. Converted fishing ships like McCoy's Tomoka waited on Rum Row and were soon joined by small motor freighters custom-built in Nova Scotia for rumrunning, with low, grey hulls, hidden compartments and powerful wireless equipment. Examples include the Reo II. Specialized high-speed craft were built for the ship-to-shore runs. These high-speed boats were often luxury yachts and speedboats fitted with powerful aircraft engines, machine guns, and armor plating. Often, builders of rum-runners' ships also supplied Coast Guard vessels (such as Fred and Mirto Scopinich's Freeport Point Shipyard).[4] Rum-runners often kept cans of used engine oil handy to pour on hot exhaust manifolds, in case a smoke screen was needed to escape the revenue ships.

On the government's side the rum chasers were an assortment of patrol boats, inshore patrol and harbor cutters. Most of the patrol boats were of the "six-bit" variety: 75-foot craft with a top speed of about 12 knots. There were also an assortment of launches, harbor tugs and miscellaneous small craft.

The rum-runners were definitely faster and more maneuverable. Add to that the fact that a rum-running captain could make several hundred thousand dollars a year. In comparison, the Commandant of the Coast Guard made just $6,000 annually, and seamen made $30/week. These huge rewards meant the rum-runners were willing to take big risks. They ran without lights at night and in fog, risking life and limb. Often, the shores were littered with bottles from a rum-runner who had hit a sandbar or a reef in the dark at high speed and sunk.

The Coast Guard relied on hard work, excellent reconnaissance and big guns to get their job done. It was not uncommon for rum-runners' ships to be sold at auction shortly after a trial — often right back to the original owners. Some ships were captured three or four times before they were finally sunk or retired. In addition, the Coast Guard had other duties, and often had to let a rum-runner go in order to assist a sinking vessel or other emergency.[5]

For multiple reasons (including the avoidance of taxes and minimum purchase prices), alcohol smuggling is still a worldwide concern.

In the United States, the smuggling of alcohol has not ended with the repeal of prohibition. In the Appalachian United States, for example, though the demand for moonshine was at an all-time high in the 1920s, an era of rampant bootlegging in dry areas continued into the 1970s.[6] Though the well-known bootleggers of the day may no longer be in business, bootlegging still exists even if on a smaller scale. The state of Virginia has reported that it loses up to $20 million from illegal whiskey smuggling.[7]

The Government of the United Kingdom fails to collect an estimated £900 million in taxes due to alcohol smuggling activities.[8]