For other hotels with similar names, see Claridge Hotel. 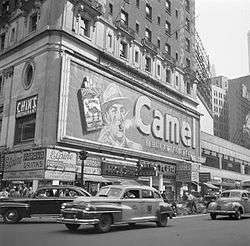 The celebrated smoking Camel cigarette billboard in Times Square was designed by Douglas Leigh and mounted on the Hotel Claridge. (Photo, 1948)

The Hotel Claridge was a 16-story building on Times Square in Manhattan, New York City, at the southeast corner of Broadway and 44th Street. Originally known as the Hotel Rector, it was built of brick in the Beaux-arts style in 1910-11. It operated for 61 years until the building was demolished in 1972.

The Hotel Rector was established by George Rector as a complement to his popular restaurant, which had been founded by his father and was frequented by New York's rich and famous, including Diamond Jim Brady and Cornelius Vanderbilt III. The timing of his new venture was unfortunate, because as the hotel was being developed, a popular Broadway play was released, called The Girl from Rector's. The play was considered indecent by many critics and gave the Rector's name an unsavory reputation. Rector held the play responsible when he declared his new hotel bankrupt in May 1913. The new owners wanted a new name to escape the stigma, so the Hotel Rector became the Hotel Claridge in 1913. The new name evoked the exclusive Claridge's of London. Although they were no longer using the old name, the new management refused to allow use of the Rector's brand for another restaurant. Rector successfully sued to regain use of his own name.[1][2][3]

The American Society of Composers, Authors and Publishers (ASCAP) was founded at the Hotel Claridge on February 13, 1914.

One of the most enduring images of Times Square is the “Camel Man”, who blew cigarette smoke rings around the clock from 1941 to 1966 from a billboard mounted on the Hotel Claridge.[5]

The building was razed in 1972 to make way for a 33-story office tower. The first and second floors currently occupied by ABC's Times Square Studios, home to "Good Morning America."

In the film Midnight Cowboy (1969), Joe Buck (Jon Voight) lodges in the Hotel Claridge at the beginning of his stay in New York City (but he is soon expelled due to failure to pay).