New York City Hall, the seat of New York City government, is located at the center of City Hall Park in the Civic Center area of Lower Manhattan, between Broadway, Park Row, and Chambers Street. The building is the oldest city hall in the United States that still houses its original governmental functions,[5] such as the office of the Mayor of New York City and the chambers of the New York City Council. While the Mayor's Office is in the building, the staff of thirteen municipal agencies under mayoral control are located in the nearby Manhattan Municipal Building, one of the largest government buildings in the world.

New Amsterdam's first City Hall was built by the Dutch in the 17th century near 73 Pearl Street.[8] The city's second City Hall, built in 1700, stood on Wall and Nassau Streets. That building was renamed Federal Hall after New York became the first official capital of the United States after the Revolutionary War. Plans for building a new City Hall were discussed by the New York City Council as early as 1776, but the financial strains of the war delayed progress. The Council chose a site at the old Common at the northern limits of the City, now City Hall Park. City Hall was originally an area for the first almhouse in 1653. In 1736, there was a financed almhouse for those who were fit to work, for the unfit, and those that were like criminals but were paupers. [9] 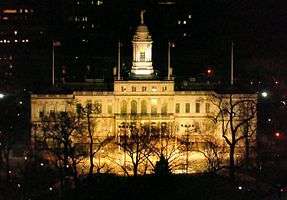 In 1802 the City held a competition for a new City Hall. The first prize of $350 was awarded to Joseph-François Mangin and John McComb, Jr.. Mangin, who was the principal designer,[1] studied architecture in his native France before becoming a New York City surveyor in 1795 and publishing an official map of the city in 1803. Mangin was also the architect of the landmark St. Patrick's Old Cathedral on Mulberry Street. McComb, whose father had worked on the old City Hall, was a New Yorker and designed Castle Clinton in Battery Park. He would supervise the construction of the building, and designed the architectural detailing as well.[1] Also, many architects were in favor of Greek Revival style and created Brooklyn City Hall, which is now called Brooklyn Borough Hall in 1848.[10]

The cornerstone of the new City Hall was laid in 1803.[11] Construction was delayed after the City Council objected that the design was too extravagant. In response, McComb and Mangin reduced the size of the building and used brownstone at the rear of the building to lower costs; the brownstone, along with the original deteriorated Massachusetts marble facade, quarried from Alford, Massachusetts, was replaced with Alabama limestone in 1954[12] to 1956. Labor disputes and an outbreak of yellow fever further slowed construction. The building was not dedicated until 1811, and opened officially in 1812. 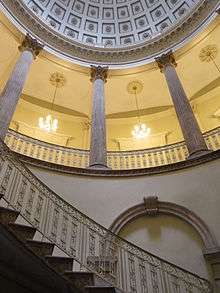 The building's Governor's Room hosted President-elect Abraham Lincoln in 1861, and his coffin was placed on the staircase landing across the rotunda when he lay in state in 1865 after his assassination. Ulysses S. Grant also lay in state beneath the soaring rotunda dome as did Colonel Elmer Ephraim Ellsworth, first Union officer killed in the Civil War and commander of the 11th New York Volunteer Infantry Regiment (First Fire Zouaves). The Governor's Room, which is used for official receptions, also houses one of the most important collections of 19th century American portraiture and notable artifacts such as George Washington's desk.

The Outer Room is adjacent to the traditional Mayor's office, which is a small space on the northwest corner of the first floor. The Ceremonial Room is where the mayor would meet officials and hold small group meetings.

There are 108 paintings from the late 18th century through the 20th. The New York Times declared it "almost unrivaled as an ensemble, with several masterpieces."[13] Among the collection is John Trumbull’s 1805 portrait of Alexander Hamilton, the source of the face on the United States ten-dollar bill. There were significant efforts to restore the paintings in the 1920s and 1940s. In 2006 a new restoration campaign began for 47 paintings identified by the Art Commission as highest in priority.

On July 23, 2003 at 2:08 p.m., City Hall was the scene of a rare political assassination. Othniel Askew, a political rival of City Councilman James E. Davis, opened fire with a pistol from the balcony of the City Council chamber. Askew shot Davis twice, fatally wounding him. A police officer on the floor of the chamber then fatally shot Askew. Askew and Davis had entered the building together without passing through a metal detector, a courtesy extended to elected officials and their guests. As a result of the security breach, then-Mayor Michael Bloomberg revised security policy to require that everyone entering the building pass through metal detectors without exception.[14]

City Hall, Park Row and City Hall Park, 1911. The structure on the right is the Manhattan station for the cable cars which ran across the Brooklyn Bridge 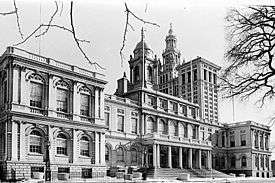 City Hall, from the Historic American Buildings Survey, with the Manhattan Municipal Building in the background on the right 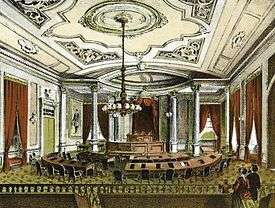 The Chamber of the Board of Councilmen in 1868

Although Mangin and McComb designed the building, which was constructed between 1810 and 1812, it has been altered numerous times over the years, with the alteration often designed by noted architects:[1][2]

The architectural style of City Hall combines two noted historical movements, French Renaissance, which can be seen in the design of the exterior, and American-Georgian in the interior design. The building consists of a central pavilion with two projecting wings. The design of City Hall influenced at least two later civic structures, the Tweed Courthouse and the Surrogate's Courthouse. The entrance, reached by a long flight of steps, has figured prominently in civic events for over a century and a half. There is a columned entrance portico capped by a balustrade, and another balustrade at the roof. The domed tower in the center was rebuilt in 1917 after the last of two major fires. The original deteriorated Massachusetts marble facade, quarried from Alford, Massachusetts, with brownstone on the rear, was completely reclad with Alabama limestone above a Missouri granite base in 1954-6.

On the inside, the rotunda is a soaring space with a grand marble stairway rising up to the second floor, where ten fluted Corinthian columns support the coffered dome, which was added in a 1912 restoration by Grosvenor Atterbury.[2] The rotunda has been the site of municipal as well as national events. Abraham Lincoln and Ulysses S. Grant lay in state here, attracting enormous crowds to pay their respects. City Hall is a designated New York City landmark. It is also listed on the New York State and National Registers of Historic Places.

Official receptions are held in the Governor's Room, which has hosted many dignitaries including the Marquis de Lafayette and Albert Einstein.

Fencing surrounds the building's perimeter, with a strong security presence by the New York City Police Department. Public access to the building is restricted to tours and to those with specific business appointments. 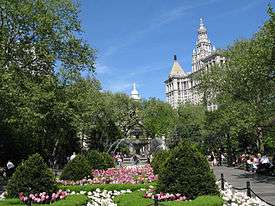 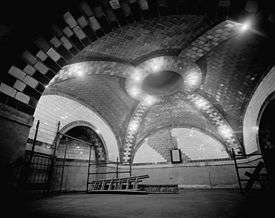 The control room at the subway station underneath City Hall

The area around City Hall is commonly referred to as the Civic Center. Most of the neighborhood consists of government offices (city, state and federal), as well as an increasing number of upscale residential dwellings being converted from older commercial structures. Architectural landmarks such as St. Paul's Chapel, St. Peters Church, the Woolworth Building, Tweed Courthouse, the Manhattan Municipal Building, the Park Row Building, One Police Plaza, and the Brooklyn Bridge surround City Hall. City Hall Park is approximately three blocks away from the World Trade Center site. Pace University's New York City campus is located across Park Row from City Hall.[15]

Located directly under City Hall Park is City Hall subway station, the original southern terminal of the first service of the New York City Subway built by the Interborough Rapid Transit Company (IRT). Opened on October 27, 1904, this station beneath the public area in front of City Hall was designed to be the showpiece of the new subway. Considered to be one of the most beautiful subway stations in the system, the station is unusually elegant in architectural style. The platform and mezzanine feature Guastavino tile, skylights, colored glass tile work and brass chandeliers. Passenger service was discontinued on December 31, 1945, although the station is still used as a turning loop for 6 <6> trains.

Another station named City Hall (N R W trains) also exists on the BMT Broadway Line, albeit on the western side of City Hall and not directly under it. This station was built in 1912 for the Brooklyn–Manhattan Transit Corporation (BMT).

In 2008, work began on a restoration of the building, after a century without a major renovation. The construction included structural enhancements, upgrades to building services, as well as in-depth restoration of much of the interior and exterior. Due to the complexity of the demands of the project, the New York City Department of Design and Construction hired Hill International to provide construction management. Renovations were originally estimated to cost $104 million and take four years, but ended up costing nearly $150 million and taking over five years.[16][17]

In the year of our Lord, eighteen hundred and six,
We set sail from the Coal Quay of Cork
We were sailing away with a cargo of bricks
For the grand City Hall in New York

Although the dates match those of City Hall, there is no recorded usage of Irish bricks in the building's construction. However the song mentions "The Irish Rover" never actually arrived in New York, but "struck a rock" and sank instead. 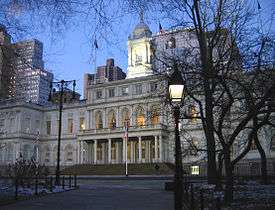