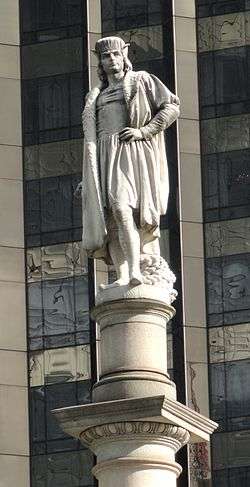 The statue of Christopher Columbus by Gaetano Russo in the middle of Columbus Circle in Manhattan, New York City.

Columbus Circle, named for Christopher Columbus, is a traffic circle and heavily trafficked intersection in the New York City borough of Manhattan, located at the intersection of Eighth Avenue, Broadway, Central Park South (West 59th Street), and Central Park West, at the southwest corner of Central Park. It is the point from which all official distances from New York City are measured. The name is also used for the neighborhood a few blocks around the circle in each direction. To the south of the circle lies Hell's Kitchen, also known as "Clinton", and the Theater District, and to the north is the Upper West Side.

Completed in 1905 and renovated a century later, the circle was designed by William P. Eno – a businessman who pioneered many early innovations in road safety and traffic control – as part of Frederick Law Olmsted's vision for Central Park, which included a "Grand Circle" at the Merchants' Gate, its most important Eighth Avenue entrance.

The monument at the center of Columbus Circle, created by Italian sculptor Gaetano Russo,[1] was erected as part of New York's 1892 commemoration of the 400th anniversary of Columbus' landing in the Americas. Constructed with funds raised by Il Progresso, a New York City-based Italian-language newspaper, the monument consists of a marble statue of Columbus atop a 70-foot (21 m) granite rostral column decorated with bronze reliefs representing Columbus' ships: the Niña, the Pinta, and the Santa María, although actually they are Roman galleys instead of caravels. Its pedestal features an angel holding a globe.

Renovations to the circle completed in 2005 included new water fountains by WET, of Fountains of Bellagio fame; wooden benches; and plantings encircling the monument. The inner circle measures approximately 36,000 square feet (3,300 m2), and the outer circle is approximately 148,000 square feet (13,700 m2). The redesign, by the Olin Partnership of Philadelphia, Pennsylvania, was the recipient of the 2006 American Society of Landscape Architects’ General Design Award Of Honor. In 2007 Columbus Circle was awarded the Rudy Bruner Award for Urban Excellence silver medal.[2] 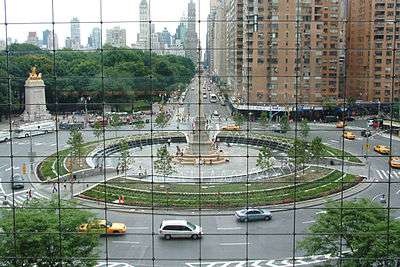 View of Columbus Circle, looking east at Central Park South from inside the Time Warner Center

Time Warner Center, the world headquarters of the Time Warner corporation, is located on the west side of Columbus Circle on the site of the old New York Coliseum. The complex also hosts the Shops at Columbus Circle, Jazz at Lincoln Center, the New York City studio headquarters of CNN and the Mandarin Oriental, New York hotel. On the north side of Columbus Circle is the Trump International Hotel and Tower, with its noted steel globe. This building had been an office tower, the headquarters of the Gulf+Western conglomerate, which was stripped to its steel skeleton and reclad in a new facade. Prestigious restaurants in the center include Landmarc, Per Se and Masa.

On the northeast lies the Merchant's Gate to Central Park, dominated by the USS Maine National Monument. The USS Maine monument was designed by Harold Van Buren Magonigle and sculpted by Attilio Piccirilli, who did the colossal group and figures, and Charles Keck, who was responsible for the "In Memoriam" plaque.[3] An imposing Beaux-Arts edifice of marble and gilded bronze, it was built in 1913 as a memorial to sailors killed aboard the battleship USS Maine, whose mysterious 1898 explosion in Havana harbor precipitated the Spanish–American War.

The address 2 Columbus Circle, on the southern side of the circle, is where Actors' Equity was founded in 1914, in the old Pabst Grand Circle Hotel, a building torn down in 1960 in order to construct a distinctive new tower designed by architect Edward Durrell Stone to house the Huntington Hartford Gallery of Modern Art. Vacant since the city's Department of Cultural Affairs departed in 1998, it was listed as one of the World Monuments Fund's "100 most endangered sites". The building's radical transformation by architect Brad Cloepfil into the new home for the Museum of Arts & Design continues to raise hackles[4] for the failure of the city's Landmarks Preservation Commission to hold hearings on its worthiness for designation. 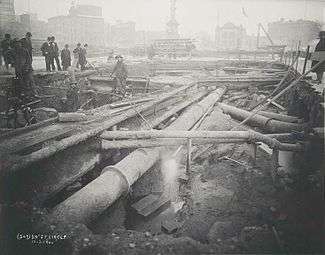 Columbus Circle during construction of the original subway in 1900

240 Central Park South, a balconied moderne apartment building across Broadway from the museum, is on the southeast side of the circle. Built in 1941, it is a city-designated landmark with a new addition, a green roof, atop its retail base.

From its inception, Columbus Circle has been a major transportation hub. The M5, M7, M20, M104 buses all serve the circle. Under it is the 59th Street – Columbus Circle subway station (1 2 A B C D trains).

Columbus Circle appears in a number of films, including Columbus Circle, It Should Happen to You, The Devil Wears Prada, Eyes of Laura Mars, Home Alone 2: Lost in New York, Taxi Driver, Die Hard with a Vengeance, Enchanted, I Am Legend, Cloverfield, The Other Guys, Tower Heist, and the end credits of The Odd Couple (TV series). Columbus Circle also appeared in the movie Ghostbusters as the site where the Stay Puft Marshmallow Man begins his trip towards 55 Central Park West, and is used as the somewhat serendipitous dominant location in the movie August Rush.

Columbus Circle is also the location of English indie rock band Kaiser Chiefs' music video, "Love's Not a Competition (But I'm Winning)". It was featured on the band's second studio album, Yours Truly, Angry Mob.

Columbus Circle also appears in the game Lego Marvel Super Heroes as a place for players to fight a Sentinel and to access a vehicle call-in point.