This is a Chinese name; the family name is Hu.

Hu Shih[1] (Chinese: 胡適, 17 December 1891 – 24 February 1962) was a Chinese philosopher, essayist and diplomat. Hu is widely recognized today as a key contributor to Chinese liberalism and language reform in his advocacy for the use of written vernacular Chinese. He was influential in the May Fourth Movement, one of the leaders of China's New Culture Movement, was a president of Peking University, and in 1939 was nominated for a Nobel Prize in literature.[2] He had a wide range of interests such as literature, history, textual criticism, and pedagogy. He was also an influential redology scholar and held the famous Jiaxu manuscript (Chinese: 甲戌本; pinyin: Jiǎxū běn; Wade–Giles: Chia-hsü pen) for many years until his death. 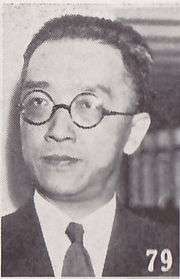 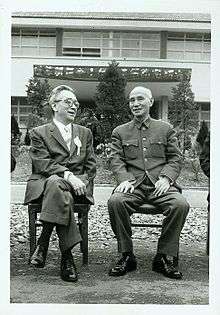 Hu became a "national scholar" through funds appropriated from the Boxer Indemnity Scholarship Program. On 16 August 1910, he was sent to study agriculture at Cornell University in the United States. In 1912 he changed his major to philosophy and literature. After receiving his undergraduate degree, he went to Columbia University to study philosophy. At Columbia he was greatly influenced by his professor, John Dewey, and Hu became Dewey's translator and a lifelong advocate of pragmatic evolutionary change, helping Dewey in his 1919-1921 lectures series in China. He returned to lecture in Peking University. During his tenure there, he received support from Chen Duxiu, editor of the influential journal New Youth, quickly gaining much attention and influence. Hu soon became one of the leading and influential intellectuals during the May Fourth Movement and later the New Culture Movement.

He quit New Youth in the 1920s and published several political newspapers and journals with his friends. His most important contribution was the promotion of vernacular Chinese in literature to replace Classical Chinese, which ideally made it easier for the ordinary person to read.[3] The significance of this for Chinese culture was great—as John Fairbank put it, "the tyranny of the classics had been broken".[4] Hu devoted a great deal of energy, however, to rooting his linguistic reforms in China's traditional culture rather than relying on imports from the west. As his biographer Jerome Grieder put it, Hu's approach to China's "distinctive civilization" was "thoroughly critical but by no means contemptuous."[5] For instance, he made a major contribution to the textual study of the Chinese classical novel, especially the 18th century novel Dream of the Red Chamber, as a way of establishing the vocabulary for a modern standardized language.[6] 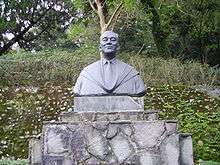 Hu Shih's tombstone in the park named after him, near Academia Sinica in Taiwan

Hu was the Republic of China's ambassador to the United States of America between 1938 and 1942.[7] He was recalled in September 1942 and was replaced by Wei Tao-ming. Hu then served as chancellor of Peking University between 1946 and 1948, and later (1957) president of the Academia Sinica in Taipei, where he remained until his death. He was also chief executive of the Free China Journal, which was eventually shut down for criticizing Chiang Kai-shek. He died of a heart attack in Nankang, Taipei at the age of 70, and is buried in a tomb in Hu Shih Park, by the Academia Sinica campus.

Hu Shih's work fell into disrepute in mainland China until a 1986 article, written by Ji Xianlin, "A Few Words for Hu Shi", advocated acknowledging not only Hu Shih's mistakes, but also his contributions to modern Chinese literature. His article was sufficiently convincing to many scholars that it caused a re-evaluation of the development of modern Chinese literature and the role of Hu Shih.[8]

During the Warlord era in the Republic of China, unlike other fellow intellectuals such as Liang Qichao and Chen Duxiu, Hu was a staunch supporter of pragmatism. Hu Shih himself translated it into Chinese as simplified Chinese: 实验主义; traditional Chinese: 實驗主義; pinyin: shíyànzhǔyì, literally meaning experimentalism, since he strived to study both academic and social problems in the scientific approach (in the general sense), and advocated cultural reform under the guidance of pragmatism.

The second translation as simplified Chinese: 实用主义; traditional Chinese: 實用主義; pinyin: shíyòngzhǔyì was crafted long after pragmatism became popular in China at that time due to Hu's endeavor. This secondary translation has become dominant today, but the intention of such terminology substitution was highly suspected to politically defame Hu for the term 實用 had been evolved into a derogatory sense.

Hu was well known as the primary advocate for the literary revolution of the era, a movement which aimed to replace scholarly classical Chinese in writing with the vernacular spoken language, and to cultivate and stimulate new forms of literature. In an article originally published in New Youth in January 1917 titled "A Preliminary Discussion of Literature Reform", Hu originally emphasized eight guidelines that all Chinese writers should take to heart in writing:

In April of 1918, Hu published a second article in New Youth, this one titled "Constructive Literary Revolution - A Literature of National Speech". In it, he simplified the original eight points into just four:

The following excerpt is from a poem titled Dream and Poetry, written in vernacular Chinese by Hu. It illustrates how he applied those guidelines to his own work.