This article is about the African ethnic group. For the New Zealand native tree, see Ascarina lucida. For the Romanian village of Huţu, see Găiceana.

The Hutu /ˈhuːtuː/, also known as the Abahutu, are a population inhabiting the African Great Lakes region. They mainly live in Rwanda, Burundi, and the eastern Democratic Republic of the Congo, where they form one of the principal population divisions alongside the Tutsi and the Twa.

The Hutu is the largest of the four main population divisions in Burundi and Rwanda. According to the Central Intelligence Agency, 84% of Rwandans and 85% of Burundians are Hutu, with Tutsis the next largest ethnic group at 15% and 14% of residents in Rwanda and Burundi, respectively.[1][2]

The Twa pygmies, the smallest of the two countries' principal populations, also share language and culture with the Hutu and Tutsi. However, they are distinguished by a considerably shorter stature.[3][4]

The Hutu are believed to have first emigrated to the Great Lake region from West Africa in the great Bantu expansion.[5] Various theories have emerged to explain the purported physical differences between them and their fellow Bantu-speaking neighbors, the Tutsi. One such thesis, largely based on oral tradition, posits that the Tutsi experienced some admixture with or were partially descended from migrants of Caucasoid stock, who usually were said to have arrived in the Great Lakes region from the Horn of Africa and/or North Africa. These pastoralists were then reckoned to have established aristocracies over the sedentary Hutu and Twa. Through intermarriage with the local Bantus, the herders were gradually assimilated culturally, linguistically and racially.[6]

An alternate theory is that the Hutu and Tutsi originally belonged to the same Bantu population, but were artificially divided by German and then Belgian colonists so that the Tutsi minority could serve as local overseers for Berlin and Brussels. The latter view has received support among proponents of Rwandan national unity, but has been criticized as an attempt at historical revisionism.[7][8]

Still others suggest that the two groups are related but not identical, and that differences between them were exacerbated by Europeans,[9] or by a gradual, natural split, as those who owned cattle became known as Tutsi and those who did not became Hutu.[4] Mahmood Mamdani states that the Belgian colonial power designated people as Tutsi or Hutu on the basis of cattle ownership, physical measurements and church records.[10]

There is an ongoing debate as to whether the Hutu and Tutsi are really separate groups or not; the government of Rwanda seems to no longer use any such distinction.

Modern-day genetic studies of the Y-chromosome suggest that the Hutu, like the Tutsi, are largely of Bantu extraction (83% E1b1a, 8% E2). Paternal genetic influences associated with the Horn of Africa and North Africa are few (3% E1b1b and 1% R1b), and are ascribed to much earlier inhabitants who were assimilated. However, the Hutu have considerably fewer Nilo-Saharan paternal lineages (4.3% B) than the Tutsi (14.9% B).[11]

In general, the Hutu appear to share a close genetic kinship with neighboring Bantu populations, particularly the Tutsi. However, it is unclear whether this similarity is primarily due to extensive genetic exchanges between these communities through intermarriage or whether it ultimately stems from common origins:

[...]generations of gene flow obliterated whatever clear-cut physical distinctions may have once existed between these two Bantu peoples – renowned to be height, body build, and facial features. With a spectrum of physical variation in the peoples, Belgian authorities legally mandated ethnic affiliation in the 1920s, based on economic criteria. Formal and discrete social divisions were consequently imposed upon ambiguous biological distinctions. To some extent, the permeability of these categories in the intervening decades helped to reify the biological distinctions, generating a taller elite and a shorter underclass, but with little relation to the gene pools that had existed a few centuries ago. The social categories are thus real, but there is little if any detectable genetic differentiation between Hutu and Tutsi.[12]

Tishkoff et al. (2009) found their mixed Hutu and Tutsi samples from Rwanda to be predominately of Bantu origin, with minor gene flow from Afro-Asiatic communities (17.7% Afro-Asiatic genes found in the mixed Hutu/Tutsi population).[13]

Hutus speak Rwanda-Rundi as their native tongue, which is a member of the Bantu subgroup of the Niger–Congo language family. Rwanda-Rundi is subdivided into the Kinyarwanda and Kirundi dialects, which have been standardized as official languages of Rwanda and Burundi respectively. It is also spoken as a mother tongue by the Tutsi and Twa.

Additionally, many Hutu speak French, the other official language of Rwanda and Burundi, as a lingua franca. 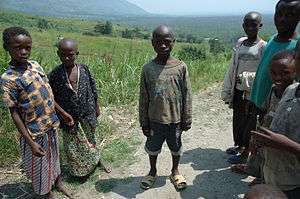 Hutu and other Rwandan children in Virunga National Park.

The Belgian-sponsored Tutsi monarchy survived until 1959, when Kigeli V was exiled from the colony (then called Ruanda-Urundi). In Burundi, Tutsis, who are the minority, maintained control of the government and military. In Rwanda, the political power was transferred from the minority Tutsi to the majority Hutu.[14]

In Rwanda, this led to the "Social revolution" and Hutu violence against Tutsis. Tens of thousands of Tutsis were killed and many others fled to neighboring countries, such as Burundi, Uganda and expanding the Banyamulenge Tutsi ethnic group in the South Kivu region of the Belgian Congo. Later, exiled Tutsis from Burundi invaded Rwanda, prompting Rwanda to close its border with Burundi.

In Burundi, a campaign of genocide was conducted against Hutu population in 1972,[15][16][17][18][19] and an estimated 100,000 Hutus died.[20][20] In 1993, Burundi's first democratically elected president, Melchior Ndadaye, who was Hutu, was believed to be assassinated by Tutsi officers, as was the person constitutionally entitled to succeed him.[21]

This sparked a genocide in Burundi between Hutu political structures and the Tutsi military, in which an estimated 500,000 Burundians died. There were many mass killings of Tutsis and moderate Hutus; these events were deemed genocide by the United Nations International Commission of Inquiry for Burundi.[22]

While Tutsi remained in control of Burundi, the conflict resulted in genocide in Rwanda as well.[23] A Tutsi rebel group, the Rwandan Patriotic Front, invaded Rwanda from Uganda, which started a civil war against Rwanda's Hutu government in 1990. A peace agreement was signed, but violence erupted again, culminating in the Rwandan Genocide of 1994, when Hutu extremists killed[24] an estimated 800,000 Rwandans, mostly Tutsis.[25]

About 30% of the Twa pygmy population of Rwanda were also killed by the Hutus.[26] At the same time, the Rwandan Patriotic Front took control of the country and is still the ruling party as of 2015. Burundi is also currently governed by a former rebel group, the Hutu CNDD-FDD.

As of 2006, violence between the Hutu and Tutsi had subsided, but the situation in both Rwanda and Burundi was still tense, and tens of thousands of Rwandans were still living outside the country (see Great Lakes refugee crisis).[1]