The empire was unlike those of the major European imperial powers in that roughly 98% of it was just one colony (about 76 times larger than Belgium) — the Belgian Congo — which had originated as the personal property of the country's king, Leopold II, rather than being gained through the political or military action of the Belgian state.

Belgians tended to refer to their overseas possessions as "the colonies" rather than "the empire".[lower-alpha 1] Unlike other countries of the period with foreign colonies, such as Britain or Germany, Belgium never had a monarch styled 'Emperor'.

Belgium received its independence in 1830 after a revolution against the Dutch government of the United Kingdom of the Netherlands. By the time Belgian independence was universally recognized in 1839, most European powers already possessed colonies and protectorates outside Europe and had begun to form spheres of influence.

During the 1840s and 50s, King Leopold I tentatively supported several proposals to acquire territories overseas. In 1843, he signed a contract with Ladd & Co. to colonize the Kingdom of Hawaii, but the deal fell apart when Ladd & Co. ran into financial difficulties.[1] Belgian traders also extended their influence in unoccupied West Africa but this too fell apart following the Rio Nuñez Incident of 1849 and growing Anglo-French rivalry in the region.

By the time Belgium's second king, Leopold II, was crowned, enthusiasm for colonialism in Belgium had abated. Successive governments viewed colonial expansion as economically and politically risky and fundamentally unrewarding. They believed that informal empire, continuing Belgium's booming industrial trade in South America and Russia, was much more promising. As a result, Leopold was initially forced to pursue his colonial ambitions without the support of the Belgian government. 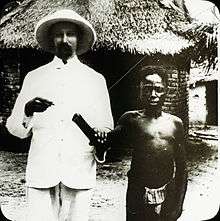 Colonial rule in the Congo began in the late 19th century. King Leopold II of Belgium, frustrated by his nation's lack of international power and prestige, tried to persuade the government to support colonial expansion around the then-largely unexplored Congo Basin. Their ambivalence resulted in Leopold's creating a colony on his own account. With support from a number of Western countries, who viewed Leopold as a useful buffer between rival colonial powers on the Continent, Leopold achieved international recognition for a personal colony, the Congo Free State, in 1885.[2]

The Free State government exploited the Congo for its natural resources, first ivory and later rubber which was becoming a valuable commodity. With the support of the colonial military, the Force Publique, the territory was divided into private concessions. The Anglo-Belgian India Rubber Company (ABIR), among others, used force and brutality to extract profit from the territory. The regime in the Congo was responsible for using forced labour, murder and mutilation to force indigenous Congolese who did not fulfill quotas for rubber collections. It is estimated that millions of Congolese died during this time.[3] Many of the deaths can be attributed to new diseases introduced by contact with European colonists, including smallpox which killed nearly half the population in the areas surrounding the lower Congo River.[4] 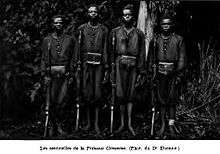 A sharp reduction of the population of the Congo through excess deaths is widely considered to have occurred during the Free State period but estimates of the deaths toll vary considerably. Although figures are estimates, it is believed that as many as ten million Congolese died during the period,[5][6][7][8] accounting for a fifth of the population. As the first census did not take place until 1924, it is difficult to quantify the population loss of the period and these figures have been disputed by some who, like William Rubinstein, claim that the figures cited by Adam Hochschild are speculative estimates based on little evidence.[9]

Although the Congo Free State was not officially a Belgian colony, Belgium was its chief beneficiary in terms of its trade and the employment of its citizens. Leopold II personally accumulated considerable wealth from the rubber and ivory exports of the colony acquired at gunpoint. Much of this was spent in numerous programmes of public building in Brussels, Ostend and Antwerp. 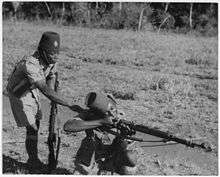 Leopold achieved international recognition for a personal colony, the Congo Free State, in 1885.[2] By the turn of the century, however, the violence used by Free State officials against indigenous Congolese and a ruthless system of economic extraction led to intense diplomatic pressure on Belgium to take official control of the country, which it did in 1908, creating the Belgian Congo.[10]

Belgian rule in the Congo was based on the "colonial trinity" (trinité coloniale) of state, missionary and private company interests.[11] The privileging of Belgian commercial interests meant that large amounts of capital flowed into the Congo and that individual regions became specialised. On many occasions, the interests of the government and private enterprise became closely tied, and the state helped companies break strikes and remove other barriers raised by the indigenous population.[11] The country was split into nesting, hierarchically organised administrative subdivisions, and run uniformly according to a set "native policy" (politique indigène). This was in contrast to the British and the French, who generally favoured the system of indirect rule whereby traditional leaders were retained in positions of authority under colonial oversight. During World War I, Congolese troops participated in offensives against German forces in the area of modern-day Rwanda and Burundi which were placed under Belgian occupation. The Congo had a high degree of racial segregation. The large numbers of white immigrants who moved to the Congo after the end of World War II came from across the social spectrum, but were always treated as superior to blacks.[12]

Congolese troops participated in World War II and were instrumental to forcing the Italians out of their East African colonies during the East African Campaign. During the 1940s and 1950s, the Congo had extensive urbanisation, and the colonial administration began various development programmes aimed at making the territory into a "model colony".[13] One of the results was the development of a new middle class of Europeanised African "évolués" in the cities.[13] By the 1950s the Congo had a wage labour force twice as large as that in any other African colony.[14]

In 1960, as the result of a widespread and increasingly radical pro-independence movement, the Congo achieved independence, becoming the Republic of Congo-Léopoldville under Patrice Lumumba and Joseph Kasa-Vubu. Poor relations between factions within the Congo, the continued involvement of Belgium in Congolese affairs, and intervention by major parties of the Cold War led to a five-year-long period of war and political instability, known as the Congo Crisis, from 1960 to 1965. This ended with the seizure of power by Joseph-Désiré Mobutu.

Ruanda-Urundi was a part of German East Africa under Belgian military occupation from 1916 to 1924 in the aftermath of World War I when a military expedition had the Germans out of the colony. It was made a League of Nations class B mandate, allotted to Belgium, from 1924 to 1945. It was designated as a United Nations trust territory, still under Belgian administration, until 1962, when it developed as the independent states of Rwanda and Burundi. After Belgium began administering the colony, it generally maintained the policies established by the Germans, including indirect rule via local Tutsi rulers, and a policy of ethnic identity cards, (a policy later retained in the Republic of Rwanda). Revolts and violence against Tutsi, known as the Rwandan Revolution, occurred in the events before independence. 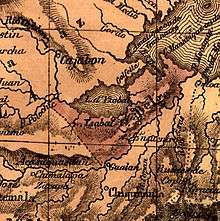 View of the Belgian colony on Santo Thomas

In 1842, arrived in Guatemala a ship sent by the king Leopold I of Belgium; the Belgians observed when the natural riches in the departament of Izabal, they decided to settle in Santo Tomas de Castilla and build infrastructure in the region. Rafael Carrera gave the region in exchange to pay sixteen thousand of pesos every year to the government of Guatemala. On 4 May 1843, the Guatemalan parliament issued a decree giving the district of Santo Tomás "in perpetuity" to the Compagnie belge de colonisation, a private Belgian company under the protection of King Leopold I of Belgium. It replaced the failed British Eastern Coast of Central America Commercial and Agricultural Company.[15] Belgian colonizing efforts in Guatemala ceased in 1854, due to lack of financial means and high fatalities suffered due to yellow fever and malaria, endemic diseases of the tropical climate.[16]

Along with several other European powers and the United States, Belgium gained a small Concession (Chinese: zujie, 租界) of a few square kilometers in the city of Tianjin, a Chinese Treaty port), as a result of the negotiations Belgian envoy Maurice Joostens conducted together with Henri Ketels after the Boxer Rebellion was crushed. This was essentially a trading post, rather than a colony. The region was under Belgian control from 1902 to 1931.

In 1919, the island of Comacina was bequeathed to King Albert I of Belgium for a year, and became an enclave under the sovereignty of Belgium. After a year, it was returned to the Italian State in 1920. The Consul of Belgium and the president of the Academy of Brera established a charitable foundation with the goal of building a village for artists and a hotel.

In 1928, Belgium, along with Italy and Portugal, acceded to the Tangier Protocol, which had been created to settle disagreements between France, Spain, and the United Kingdom over the control of Tangier. Of the twelve administrators, the final two were Belgian.

The Belgian Ministry of Foreign Affairs contains documents from the reign of Leopold I that contained possible locations to colonize. Some were the site of attempted colonies, whereas others were only considered.[17]