The Hyundai i10 is a city car produced by the South Korean manufacturer Hyundai since 2007. It replaced the Hyundai Atos in the model line-up and is available only with a five-door hatchback body style.

The second generation of the car was presented in August 2013 and released in early 2014. A slightly larger version, developed for the Asian market, was released in September 2013 as the Grand i10.

The first generation i10 had its world premiere on 31 October 2007, in New Delhi, India.[2] It is produced in India at Hyundai's Chennai plant for the domestic and export markets.

Hyundai started development of the i10 to replace the Hyundai Atos, also known as the Santro. The development for the concept was code-named Hyundai PA. The car was targeted primarily at the Indian market and intended for production in India, given the popularity of hatchback subcompacts in the country. 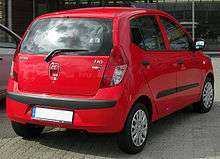 The i10 has a large gaping air-dam, pulled-back headlamps, chrome-lined grill, integrated clear lens fog lamps, a bonnet that has a clam shell hint and a rear window with an upswept kink. 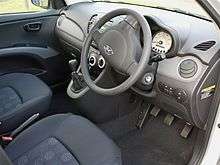 The tailgate has a chrome-lined boot-release handle and an integrated roof spoiler on the top- end versions.

Overall length (3,565 mm) and wheelbase (2,380 mm) are identical to the Santro with slightly more interior space; Ergonomic design was intended to accommodate tall drivers and increasing rear knee room. The width has been increased (and front and rear track) by 70 mm (2.8 in) for more shoulder room. The height has been reduced by 40 mm (1.6 in). Boot space at 225 litres (7.9 cu ft) is significantly lower than that of Getz.

The interior has a plastic dash housing with an optional integrated stereo. The instrument binnacle has a large white-faced speedometer, flanked by the tachometer and fuel and temperature gauges.

The gear lever is built into the centre console, leaving space between the front seats for a couple of cup holders. 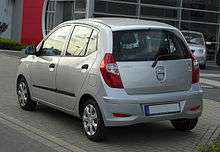 In September 2010, Hyundai introduced a facelift for the i10. Sporting an innovative design look and an array of contemporary features.

Hyundai introduced an all-new front-end design inspired by the Fluidic Sculpture design language. Its centrepiece is a new radiator grill which features chrome detailing. It also boasts a bracing set of 3D wraparound headlamps with multi-reflector chrome surround fog lamps. The bumpers have also been redesigned with a new front grille to lend a more aggressive look.

It also features a micro roof antenna, body colour door handles and the side indicator lights incorporated on the outside rear view mirror. The rear of new i10 boasts of sleek and elongated tail lamps, bold rear bumper with body coloured inserts as well as rear bumper reflectors and trendy full wheel cover.

The new i10 has a two-tone beige and light brown colour in certain markets. To impart a more aesthetic appeal, the interiors have been accentuated with chrome and silver accents at multiple points. Other interesting design features like metal finish centre console, new instrument cluster, blue interior illumination, etc., have been added to offer a more luxurious and ergonomic experience.

The i10 was launched with a 1.1 litre 65 bhp (48 kW; 66 PS) I4 iRDE engine - the same motor used in the Kia Picanto and Hyundai Atos Prime/Santro Xing but with lower CO2 emissions.

The i10 also comes with a 1.2 litre petrol Euro-5 compliant engine (called the Kappa engine), with the same CO2 emissions as the 1.1L version. The spark plug of the 1.2L is non-standard.

A 1.1 litre 3-cylinder diesel CRDi variant is available in Europe but has not yet been introduced into the UK and Indian market.

Hyundai recently launched the i10 Electric in Delhi Auto Expo; it is expected to be available in India by 2011.[3] The i10-based electric car is called BlueOn.[4]

In 2010 Hyundai launched a facelifted version of the i10 in India which uses a Kappa 2 engine with VTVT Technology to further improve performance of this engine. Hyundai engineers have taken the existing 1.2-litre 4-cylinder Kappa engine and added VTVT (Variable Timing and Valve Train). The i10 is the first small car in the country to receive variable valve timing making it, on paper at least, the most sophisticated 1.2-litre engine in its segment (the Honda Jazz also has an i-VTEC head but is a segment higher). This system, working on the intake side, helps in altering the valve timing and lift according to the situation and thus improves low-end responses and fuel efficiency. VTVT hasn’t increased the horsepower and it is still rated at 80 PS (59 kW; 79 hp). However the engine is reported to feel more refined and show very little vibration at higher revs

Hyundai i10 was widely recognised as "Car of the Year 2008" by various automotive magazines and TV channels in India like BS Motoring, CNBC-TV18 AutoCar,[5] NDTV Profit Car & Bike India[6] and Overdrive magazine. The car was conferred with the Indian Car of the Year (ICOTY) by automotive media of the country.[7] In Malaysia the Hyundai i10 has also earned recognition through many awards such as the Best People's Car in the Asian Auto – VCA Auto Industry Awards 2009,[8] 1st Place in Asian Auto-Mudah.my Fuel Efficiency Awards 2009 in the Compact City Cars Category with a combined fuel efficiency of 5.0l/100 km, which is not only the best performance in its category but also throughout all the participating vehicles in Malaysia.[9] The Hyundai i10 also won the New Straits Times / Maybank Car of the Year Award in the Entry Level Car category two times consecutively in 2009 and 2010.[10][11]

In 2008, Hyundai commemorated 10 years of operations in India by initiating a transcontinental drive from Delhi to Paris in two of its i10 Kappa cars. The drive covered a distance of 10,000 kilometres (6,200 mi) in just 17 days after which the i10s were showcased at the Paris Motor Show in October.[12] At the Paris Motor Show Hyundai unveiled the Hyundai i20.

In 2013, leading automotive portal CarDekho awarded Hyundai i10 as 'Most Popular Hatchback' in India.[13]

Euro NCAP test results for a LHD, 5-door hatchback variant on a 2008 registration:[14]

ASEAN NCAP test results for a RHD, 5-door hatchback variant on a 2011 registration:[15]

The amount of safety features varies from market to market. While most countries have the i10 equipped with airbags for all passengers, the entry-level 1.1 manual transmission model in the Philippines can be sold without airbags.

Since launch and as of August 2009, electronic stability control (ESC) is still a special-order option for UK spec cars which prevents a full 5-star EuroNCAP score.

In India Hyundai i10 is available in nine variants, and with two different engine options. Two variants (D-lite and Era) of Hyundai i10 are equipped with 1.1L, 1086 cc, IRDE (Intelligent Responsive Drive Engine) petrol engine with manual transmission gearbox. This engine produces 66.7 PS (49 kW; 66 hp) of maximum power at 5500 rpm and maximum torque of 10.1 kg·m (99 N·m; 73 lb·ft) at 2500 rpm. HMIL (Hyundai Motor India Ltd) makes the Hyundai i10 price very competitive in the Indian auto market. Car is available in 3.5 to 5 lakh range and it is giving very tough competition to all other cars of this segment.

Hyundai Eon LPG Era Plus: It is the same Hyundai Eon Era, but with a LPG fuel option, rest all features remain same.

Hyundai Eon LPG Magna Plus: It is the top-end LPG variant, which comes with all the features, available on Eon Magna Plus.[16]

Hyundai developed the second generation i10, which was originally planned for release in early 2014. Development of the new i10 started in India in 2012, using the Kia Picanto as a test mule for individual parts.[24]

The engines offered on the European model will be as follows:[21]

Production of the i10 commenced at Hyundai Assan Otomotiv's plant in İzmit, Turkey, in late-September 2013, at an annual capacity of 200,000 units.[28]

Euro NCAP test results for a LHD, 5-door hatchback variant on a 2014 registration:[29]

Electronic Stability Control (ESC) is standard on this new 2014 re-design of the Hyundai i10.

Hyundai Motor India Ltd. released the new model in September 2013 as the Grand i10; it slots between the first generation i10, which will continue to be manufactured for the Indian market, and the i20. The Grand i10 differentiates from the European model with its wheelbase increase by 100 mm (3.9 in).[30] The Grand i10 was launched in September at prices ranging from Rs. 4.29 Lakhs to Rs. 6.41 lakhs.[31]

The Grand i10 is available with three engine options:

On February 2014, Hyundai Asia Resources, Inc. (HARI) announced details on the Philippine-market version of the Grand i10. The U2 CRDi engine will not be offered in the country; instead, the base models come with the 1.0 liter three-cylinder petrol engine while the 1.2 liter four-cylinder engine is reserved for the range-topping L automatic transmission model.[18]

The Grand i10 offers host of features like dual-toned interiors, enlarged cabin space, keyless entry, push button on/off and auto folding outside mirrors that automatically open and fold when car is unlocked and locked.[32] In addition, the car is equipped with rear AC vents and 1GB internal memory to store music, which are both first in its segment.[32][33]

In early 2014, Hyundai released the Grand i10 in Mexico. The car is offered with only the 1.2 liter four-cylinder engine in the market.[34]

The India-spec Grand i10 is available in four variants:[32]

The Philippine-spec Grand i10 comes in five variants:[18]

The Grand i10 is positioned to compete with the Maruti Swift in India and other similar cars in the segment.[35] In the Philippines, the Grand i10 is in competition with the Mitsubishi Mirage and Toyota Wigo.[36]

Prior to the official unveiling of the Grand i10, Hyundai Motor India Ltd. revealed that a sedan variant will be launched in 2014.[37] The new sedan, called the Xcent, was revealed on February 2014 and will hit showrooms on March 2014 to compete with the Honda Amaze and Maruti Suzuki Swift Dzire.[38][39]

The European i10 was met with very positive reviews. John McIlroy of What Car? magazine gave the car a perfect five-star rating, commenting that it "represents a major step forward over its predecessor – to the point where it's an extremely tempting alternative to a VW Up, and not just on price."[40] Piers Ward of Top Gear gave the i10 a score of 8 out of 10, with his verdict being: "Yet another quality car from the Koreans. Cheap price, good design and with minimal compromise."[41] Matt Burt of Autocar gave it four-and-a-half out or five stars, calling it "one of the most accomplished and well-rounded offerings in the city car segment, and has road manners that would embarrass a few much larger (and more expensive) vehicles."[42] Andrew English of The Daily Telegraph also gave the car four out of five stars, describing it as "Clever and quite a nice little car. Reasonable comfort, ride, handling and well put together, though not the most economical. It's certainly the best car Hyundai makes and wouldn't be disgraced as the family's main transport."[43]