The Volkswagen Up (stylized as Volkswagen up!) is a city car, part of the Volkswagen Group New Small Family (NSF) series of models, unveiled at the 2011 International Motor Show Germany (IAA).[6] Production of the Up started in December 2011 at the Volkswagen Bratislava Plant in Bratislava, Slovakia.[7]

The production Up follows a series of concept cars, starting in 2007 at the Frankfurt Motor Show.[8] The exterior was originally designed by the Brazilian designer Marco Pavone.[9][10] This design was chosen and enhanced by Volkswagen Group Chief Designer Walter de'Silva, and Head Designer of the Volkswagen Passenger Cars marque, Klaus Bischoff. Shown at the Frankfurt launch were several further Up concepts, including a 98 hp (73 kW) GT version, a natural gas-powered Eco-up! (with CO2 emissions of 79 g/km) and a four-door Cross model.[6]

Where the Up concept used a rear-engine, rear-wheel drive layout, the 2011 production model has a front-engine, front-wheel drive layout, using the NSF platform,[1] with a 3-cylinder 1.0 litre petrol engine.[11] A battery electric version, called E-up, was launched in autumn 2013.

The SEAT Mii and Škoda Citigo are rebadged versions of the Up, with slightly different front and rear fascias, and are manufactured in the same factory.[12]

In February 2014 Volkswagen introduced a modified version of the Up for Latin America. The Brazilian-built Up differs from its European counterpart in length (it is 65 mm (3 in) longer), thanks to revisions to the floorpan's rear section to accommodate a larger fuel tank (50L instead of Europe's 35L), a full-sized spare wheel and increased cargo space. All versions have revised tailgates with a painted metal section (like the Seat Mii's and Škoda Citigo's) instead of the dark glass trim used in Europe. The 5-door Brazilian Up also uses a different rear door design with sectioned glass and wind-down windows. The South American model retains the European version's safety levels with a five-star crash rating[13] and ample use of high-strength steel elements.[14]

At International Motor Show Germany IAA 2011 Volkswagen unveiled the final version of the Up based on the Volkswagen New Small Family (NSF) modular architecture.[1] The three-door bodywork is inspired by the 2007 concept UP, the engine range is 1.0 L three-cylinder gasoline 60 hp (45 kW) and 75 hp (56 kW). Both the three and five doors are available with engines running on CNG and called eco-Up. The Up is a front-wheel drive with transverse engine mated to a five-speed manual gearbox and is 3.54 metres (139 in) long has a wheelbase of 2.42 m (95 in). The cabin is configured to four seats.

The UP is available to order in the United Kingdom since October 2011 for five models – marketed as Take up!, Move up!, High up!, up! black and up! white.[16] British television show Top Gear presenters mock the unusual name by calling the model "Up-exclamation-mark".[17]

It was introduced on the German market on December 3, 2011. Deliveries to other European markets began in April 2012.

SEAT Mii limited production started in October 2011 for the European market, with sales having started at the end of 2011. The final version was launched in May 2012. The Škoda Citigo was launched in the Czech Republic in October 2011. The Citigo will be sold in other countries of Europe from summer 2012, as well as in Asia (except Japan and Korea where SEAT and Škoda is unavailable), possibly including Russia if it will be produced in Kaluga.

Japanese sales began 1 October 2012; it and the Polo are the only two products that comply with Japanese Government dimension regulations.

In 2014, at the Geneva Motor Show, Seat presented the 2014 Seat Mii by Mango model designed just for ladies, made in collaboration with the Spanish fashion company Mango.[19]

Volkswagen has announced the Up range will be extended to include a production version of the GT Up concept, which will launch in 2013. This will feature a turbocharged version of the 1.0-litre three-cylinder engine producing 110 hp (82 kW) and will look similar to the concept version.[20] An electric hybrid Up — which will be badged Blue-e-motion — will follow.[21]

Along with the other two rebadged models, Up is the first car in its class to offer an automated braking system, called City Emergency Braking. The system is automatically activated at speeds below 30 km/h (19 mph), when a laser sensor identifies a danger of collision and activates the brakes. In the SEAT model, the system is called City Safety Assist and in the Škoda model it is called City Safe Drive.[22]

In July 2010 VW announced the production version of the e-up! electric car, with sales scheduled to begin in 2013,[23] and was subsequently unveiled at the September 2013 International Motor Show Germany.[24]

The production version has an 18.7 kWh lithium-ion battery able to deliver 160 km (99 mi) on the NEDC cycle, and top speed of 130 km/h (81 mph). The E-up can be charged with 2.3 kW plugged into any standard 230V socket, with 3.6 kW via a home-installed wall box or with up to 40 kW plugged into a DC fast-charging station via the optional CCS (Combined Charging System), which allows the battery to charge up to 80% in under 30 minutes.[25] The production version has the same dimensions as the 5 door petrol model with seating for four.[26][27] 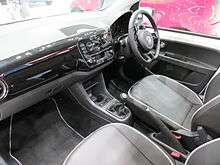 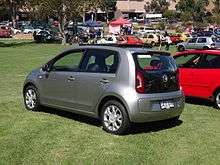 Both engines are also available with BlueMotion technologies (SEAT: Ecomotive, Skoda: Green Tech), which incorporates a start-stop system and regenerative brakes to reduce carbon emissions. Depending on markets, some 60PS and 75PS models are available with optional five-speed automatic transmission.

In 2011, the SEAT MII was evaluated for its safety performance under the Euro NCAP assessment scheme and it achieved a 5-star overall rating:[36]

From 2007 through to 2010 Volkswagen showed a number of concept versions of the Up prior to the launch of the production ready version in 2011.

The two-door Up concept debuted at the 2007 IAA International Motor Show Germany in Germany,[8] with a rear-wheel drive, rear-mounted, boxer engine and 18 inch wheels.[8]

The interior is designed to accommodate four adults, and features flat-folding, air inflatable seats.[8] It also has two monitors on the dashboard, one showing vehicle statistics and the other controlling the in-car multimedia system.[8] The car measures 3.45 metres (11 ft 4 in) in length[8] and has a width of 1.63 metres (5 ft 4 in).[8] 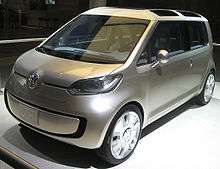 The four-seater space up! blue concept, the third variant of the Volkswagen Up concept series, debuted at the 2007 Los Angeles Auto Show.[42]

The Space Up Blue was visually the same as the Space Up and shared its length and width, but it included a different roof with a 150 watt solar cell which recharges the batteries.[42] This means its height increases to 1.57 metres (5 ft 2 in) and the curb weight is a 1,090 kilograms (2,403 lb).[42]

The 3.19 metres (10 ft 6 in) long all-electric E-up uses a 3+1 seater configuration.[43] It uses a 60 kilowatts (82 PS; 80 bhp) (continuously rated at 40 kilowatts (54 PS; 54 bhp)) all-integrated drive electric motor, mounted at the front and drives the front wheels.[43] This electric motor generates a torque turning force of 210 N·m (155 lb·ft) from rest.[43] Power is sourced from 18 kilowatt-hours (kWh) lithium-ion batteries, which will give a range up to 130 kilometres (81 mi).[43] Quick charging will charge the battery up to 80% in an hour,[43] while a regular 230 volt plug will take five hours.[43][44] The roof of the E-up has a 1.4 square metre solar cell which supplies power to the vehicle’s electrics, and when parked can power ventilation fans to help cool the interior when parked in bright sunlight on a hot day.[43] The solar cells can be increased in size to a total area of 1.7 square metre by folding down the sun visors.[43]

Interior equipment includes a touch-screen human machine interface (HMI), one notable feature allows the charge to be delayed within the HMI programming, utilising cheap-rate night-time electricity—and this can also be remotely programmed via an iPhone or similar device.[43]

The Volkswagen e-Up! was launched in Germany in October 2013.

The Volkswagen IN is a design study created by Brazilian interns of Volkswagen do Brasil which carries a significant resemblance to the Up concept cars. It is a two-seater plus luggage sub-compact capable of adopting a variety of powertrains, including a fully electric one using in-wheels electric engines.[46][47] The mock-up in 1:1 scale was presented to the press on January 29, 2010.