For other uses, see Iman (disambiguation).
Not to be confused with Imam, a prayer leader in Islam.

Iman in Islamic theology denotes a believer's faith in the metaphysical aspects of Islam.[1][2] However, Iman is different from faith in the sense that it should not be blind belief, and should be accompanied by reason. Its most simple definition is the belief in the six articles of faith, known as arkān al-īmān.

The term Iman has been delineated in both the Quran as well as the Hadith of Gabriel.[3] According to the Quran, Iman must be accompanied by righteous deeds and the two together are necessary for entry into Paradise.[4] In the Hadith of Gabriel, Iman in addition to Islam and Ihsan form the three dimensions of the Islamic religion.

There exists a debate both within and outside Islam on the link between faith and reason in religion, and the relative importance of either. Several scholars contend that faith and reason spring from the same source and hence must be harmonious.[5]

In Arabic, Iman (إِيمَان ʾīmān), pronounced [ˈʔiː.maːn] means "faith". It is the verbal noun of آمَنَ "to believe (in something)."

In a hadith, Muhammad defined iman as "a knowledge in the heart, a voicing with the tongue, and an activity with the limbs." Faith is confidence in a truth which is real. When people have confidence, they submit themselves to that truth. It is not sufficient just to know the truth, but the recognition of the heart should be expressed by the tongue which is the manifestation of the intelligence and at last to reflect this confidence in their activities.[6]

Hamiduddin Farahi, while explaining the meaning of Imān in his exegesis, wrote:

The root of imān is amn. It is used in various shades of meaning.[7] One of its derivatives is mu'min, which is among the noble names of Allah because He gives peace to those who seek His refuge. This word is also an ancient religious term. Hence the certitude which exists with humility, trust and all the conditions and corollaries of adherence to a view is called imān and he who professes faith in Allah, in His signs and in His directives and submits himself to Him and is pleased with all His decisions is a mu'min.[8]

The six articles of the Islamic faith

Iman is generally outlined using the six articles of faith:

Of these, the first five are mentioned together in the Qur'an[9] and by Muhammad, while including a corollary of belief in Allah – the good and evil of fate ordained by God – has referred to all six together in the following manner in the Hadith of Gabriel:

"Iman is that you believe in God and His Angels and His Books and His Messengers and the Hereafter and the good and evil fate [ordained by your God]."[10]

Another similar narration ascribed to Muhammad is:

It is also assumed that the essential Iman consists of the first 3 items (Belief in God, Prophets, and the Hereafter).[12]

Delineation in the Quran and Hadith

In the Quran, Iman is one of the 10 qualities which cause one to be the recipient of God's mercy and reward.[13] The Quran states that faith can grow with remembrance of God.[14] The Qur'an also states that nothing in this world should be dearer to a true believer than faith.[15]

Muhammad is reported to have said that he gained sweetness of faith who was pleased to accept God as Lord, Islam as religion and Muhammad as prophet.[16] He also said that no one can be a true believer unless he loves the Prophet more than his children, parents and relatives.[17][18] At another instance, he has remarked that it is this love with God and Muhammad after which a person can be aware of the real taste of faith.[19][20]

Amin Ahsan Islahi, a notable exegete of the Qur'an has clarified the nature of this love:[21]

Islahi and Maududi both have inferred that the Quranic comparison of a good word and a bad word in Chapter 14[22] is actually a comparison of faith and disbelief. Thus, the Qur'an is effectively comparing faith to a tree whose roots are deep in the soil and branches spread in the vastness of the sky.[23]

Iman is also the subject of a supplication uttered by Muhammad to God:

O God! I have resigned myself to You and I have consigned my matter to you and have taken support from You fearing Your grandeur and moving towards You in anticipation. There is no refuge and shelter after running away from You, and if there is, it is with You. Lord! I have professed faith in your Book which You have revealed and have professed faith in the Prophet you have sent as a Messenger.[24]

The 77 Branches of Iman

The 77 Branches of Faith is a collection compiled by Imam Al-Bayhaqi in his work Shu`ab al-Iman. In it, he explains the essential virtues that reflect true faith (Iman) through related Qur'anic verses and prophetic sayings.[25][26]

This is based on the following Hadith ascribed to Muhammad:

Abu Hurayrah narrated that the Prophet said: "Iman has more than 70 branches. The most excellent among these branches is the saying of "Laa ilaaha ill Allah" (there is no God but Allah), and the smallest branch is to remove an obstacle from the wayside. And Haya (modesty) is an important branch of Iman."[27] 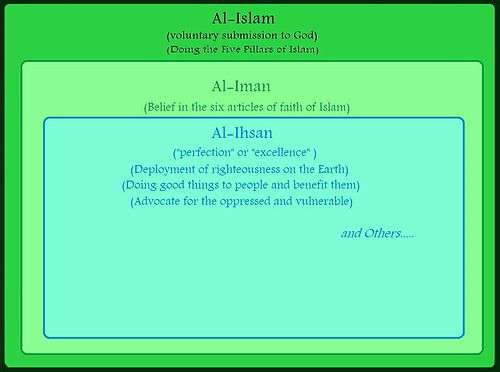 The three dimensions of Islam (Islam including Iman including Ihsan.)

In Islam, it is essential that there exist harmony and concord between faith and deeds. Farāhī has explained this aspect in his tafsīr in the following manner:[28]

Righteous deeds are mentioned in the Qur’ān right after faith in the capacity of an explanation ... In the case of faith, the need for its explanation is obvious: the place of faith is the heart and the intellect. In matters of intellect and heart, not only can a person deceive others but also at times he himself can remain in deception. He considers himself to be a mu’min (believer) whereas actually he is not. For this reason, two testimonies needed to be required for it: a person's words and a person's deeds. Since words can be untrue, hence a person who only professes faith through words is not regarded as a mu’min and it was deemed essential that a person's deeds also testify to his faith. Thus the Qur’ān said: O you who believe with the tongue! Believe through your deeds.[29]

Faith and reason in Islam

The relation between reason and faith in Islam is a complex debate spanning over centuries. Ismail Raji al-Faruqi states on this subject:

As for the non-Muslims, they may contest the principles of Islam. They must know, however, that Islam does not present its principles dogmatically, for those who believe or wish to believe, exclusively. It does so rationally, critically. It comes to us armed with logical and coherent arguments, and expects our acquiescence on rational, and hence necessary, grounds. It is not legitimate for us to disagree on the relativist basis of personal taste, or that of subjective experience.[30]