For other uses, see Dawa.

Da‘wah (also transliterated daawa(h); Arabic: دعوة‎‎ "invitation") means the proselytizing or preaching of Islam. Da‘wah literally means "issuing a summons" or "making an invitation", being a gerund of a verb meaning variously "to summon" or "to invite" (whose triconsonantal root is d-ʕ-w دعو). A Muslim who practices da‘wah, either as a religious worker or in a volunteer community effort, is called a dā‘ī (داعي, plural du‘āh/du‘āt ).

A dā‘ī is thus a person who invites people to understand Islam through dialogue, not unlike the Islamic equivalent of a missionary inviting people to the faith, prayer and manner of Islamic life.[1]

The term da'wah has other senses in the Qur'an. In sura (chapter) 30:25, for example, it denotes the call to the dead to rise on the Day of Judgment. When used in the Qur'an, it generally refers to Allah's invitation to live according to His will. Thus, when used in the first centuries of Islam, it usually referred to that message and was sometimes used interchangeably with sharī‘a and dīn.

Da‘wah is also described as the duty to "actively encourage fellow Muslims in the pursuance of greater piety in all aspects of their lives", a definition which has become central to contemporary Islamic thought.[2]

During the Expedition of Al Raji in 625,[3] the Islamic Prophet Muhammad sent some men as missionaries to various different tribes. Some men came to Muhammad and requested that Muhammad send instructors to teach them Islam,[3] but the men were bribed by the two tribes of Khuzaymah who wanted revenge for the assassination of Khalid bin Sufyan (Chief of the Banu Lahyan tribe) by Muhammad's followers[4] 8 Muslim Missionaires were killed in this expedition,[3] another version says 10 Muslims were killed.[5] 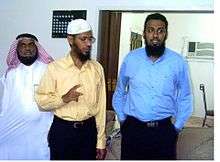 Then during the Expedition of Bir Maona in July 625[6] Muhammad sent some missionaries at the request of some men from the Banu Amir tribe,[7] but the Muslims were again killed in revenge for the assassination of Khalid bin Sufyan by Muhammad's followers.[4] 70 Muslims were killed during this expedition.[7]

During the Expedition of Khalid ibn al-Walid (Banu Jadhimah) in January 630,[8] Muhammad sent Khalid ibn Walid to invite the Banu Jadhimah tribe to Islam.[9] This is mentioned in the Sunni Hadith Sahih al-Bukhari, 5:59:628.[10]

Mus`ab ibn `Umair was the first Muslim envoy in September 621.[11][12] He was sent to Yathrib (now Medina) to teach the people the doctrines of Islam and give them guidance.[12]

In Islamic theology, the purpose of da‘wah is to invite people, both Muslims and non-Muslims, to understand the worship of Allah as expressed in the Qur'an and the sunnah of the prophet Muhammad and to inform them about Muhammad.[13]

The importance of Dawah has been emphasised many times in the Quran:

Who is better in speech than one who calls to Allah, does righteous deeds and says indeed I am among the Muslims.
— Quran, Sura 41 (HAA-meem-shisdah), ayah 33[15]

You are the best nation raised up for humankind. You enjoin righteousness, forbid corruption and you believe in Allah.
— Quran, Sura 3 (Al-Imran), ayah 110[16]

Let there arise among you a group inviting to all that is good, enjoining righteousness and forbidding evil. Those are the successful ones.
— Quran, Sura 3 (Al-Imran), ayah 104[17]

In the Hadith ("sayings") of Muhammad, dawah is mentioned to emphasise importance and virtues:

"Whoever directs someone to do good will gain the same reward as the one who does good."[19]
"Whoever calls to guidance will receive the same reward as the one who follows him without any decrease in the reward of his follower."[20]
"For Allah to guide someone by your hand is better for you than having red camels."[21](In ancient Arabia, camels – especially of a reddish hue – were considered particularly valuable property.)
"Convey from me, even if it be only a single verse."[22]

Muhammad sent Muadh ibn Jabal to Yemen and told him “You will be going to Christians and Jews, so the first thing you should invite them to is the assertion of the oneness of Allah, Most High. If they realize that, then inform them that Allah has made five daily prayers obligatory on them. If they pray them, then inform them that Allah has made the payment of charity from their wealth obligatory on their rich to be given to their poor. If they accept that, then take it from them and avoid the best part of people’s property.”[23]

With regard to Muhammad's mild nature in preaching Islam, the Quran says:

"And by the mercy of Allah you dealt with them gently. If you were harsh and hard hearted, they would have fled from around you" (Quran 3:159).

The Quran says about Moses and Aaron who preached to Pharaoh, the claimant of God,:

Muhammad was reported by his wife, Aisha to have said “Whenever gentleness is in a thing it beautifies it and whenever it is withdrawn from something it defaces.”[24]

Muhammad was quoted by Jareer as saying,“One deprived of gentleness is deprived of all good."[25]

A classical example of diversion in dawah can be seen in the case of Prophet Yusuf in prison when two prisoners asked him to interpret their dreams. Then it occurred to them, after they had seen the proofs to imprison him for a time. And there entered with him two young men in the prison. One of them said: “Indeed, I saw myself pressing wine.” The other said: “Indeed, I saw myself carrying bread on my head and birds were eating from it.” [They asked:] “Inform us of the interpretation of these things. Indeed, we believe you are one of the righteous.” He replied: “Whenever food came to you as your provision, I informed you about it before it came. That is from what my Lord has taught me. Indeed, I have abandoned the religion of a people who did not believe in Allah and the Hereafter. And I have followed the religion of my fathers, Abraham, Isaac, and Jacob, and we would never attribute any partners whatsoever to Allah. This is from the Grace of Allah to us and to humankind, but most people are not thankful. O my two prison companions! Are many different lords better than Allah, the One, the Irresistible? You are only worshiping besides Him names which you and your fathers made up for which no authority was revealed by Allah. Judgment belongs to Allah alone. He has commanded that you worship none besides Him; that is the upright religion, but most people do not know. O my two prison companions! As for one of you, he will pour wine for his lord to drink and as for the other, he will be crucified and birds will eat form his head. This is the case judged concerning which you both inquire.” "Sura Yusuf" 12:35-41.

“I did not send any messenger except that he spoke the language of his people to explain to them.” Sura "Ibrahim" 14:4.

Doing Dawah in the right location. For example, Mount Safa in the time of Muhammad was used for announcements. So Muhammad went there to make his point. He chose that particular location because he knew the people who he was inviting to Islam. He knew their nature and characteristics, so he chose Mount Safa. He climbed up to its summit and addressed his people saying: “O people of Quraysh, if I were to tell you there was an army behind this hill would you listen to me?”[26]

Modern Dawah movements are varied in their objectives and activities. Examples include: