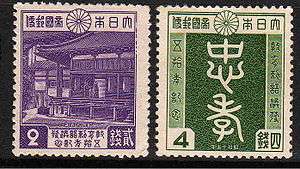 The Imperial Rescript on Education (教育ニ関スル勅語, Kyōiku ni Kansuru Chokugo) was signed by Emperor Meiji of Japan on 30 October 1890 to articulate government policy on the guiding principles of education on the Empire of Japan. The 315 character document was read aloud at all important school events, and students were required to study and memorize the text.

Following the Meiji Restoration, the leadership of the Meiji government felt the need to emphasize the common goals of rapid modernization (westernization) with support and legitimization of the political system centered on the imperial institution. In the 1870s and 1880s, Motoda Nagazane and other conservatives pushed for a revival of the principles of Confucianism as a guide for education and public morality; however, Inoue Kowashi and other proponents of the 'modernization' of Japan felt that this would encourage a return to the old feudal order, and pushed for an "emperor-centered" philosophy. Prime Minister Yamagata Aritomo authorized the drafting of the Rescript, which was a compromise written largely by Inoue Kowashi with input from Motoda Nagazane and others.

After it was issued, the Rescript was distributed to all schools in the country, together with a portrait of Emperor Meiji.

The Rescript requested of the people that they "furthermore advance public good and promote common interests; always respect the Constitution and observe the laws; should emergency arise, offer yourselves courageously to the State; and thus guard and maintain the prosperity of Our Imperial Throne coeval with heaven and earth".

The basis of the Rescript was that Japan's unique kokutai was based on a historic bond between benevolent rulers and loyal subjects, and that the fundamental purpose of education was to cultivate virtues, especially loyalty and filial piety.

After the end of World War II in Asia following the surrender of Japan, the American occupation authorities forbade the formal reading of the Imperial Rescript in schools, and the National Diet officially abolished it on 19 June 1948.

Kikuchi Dairoku and the Imperial Rescript on Education

In 1907, Kikuchi Dairoku was invited by the University of London to give lectures on education from the middle of February for about five months. The central focus of his lectures was the Imperial Rescript on Education. The request for the lectures was initially communicated to Hayashi Tadasu, then ambassador in London (from December 1905). At first Sawayanagi Matsutaro was to give the lectures, but he was recalled when in Rome on the way to London and Kikuchi gave the lectures instead. As a preparation for the lectures he translated the Imperial Rescript into English.