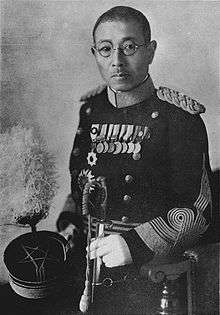 Tōseiha, or Control Faction (統制派, Tōseiha), was a political faction in the Imperial Japanese Army active in the 1920s and the 1930s.

Led by Major General Tetsuzan Nagata, along with Hideki Tōjō, the Tōseiha was a grouping of officers united primarily by their opposition to the Kōdōha faction led by General Sadao Araki and Jinzaburō Masaki. The name "Tōseiha" was pejorative and was coined and used only by Kōdōha members and sympathizers.

The Tōseiha attempted to represent the more conservative and moderate elements within the army, as opposed to the more radical and ultranationalist Kōdōha. The Tōseiha was a nonregional coalition, as opposed to Araki's reintroduction of regional politics into army promotions and policy decisions. Many members were promising graduates of the Imperial Japanese Army Academy and Army Staff College, and were concerned about Araki's emphasis of the spiritual élan of the army instead of modernization and mechanization.

Whereas the Kōdōha was strongly supportive of the hokushin-ron strategy of a preemptive strike against the Soviet Union, the Tōseiha favored a more cautious defense expansion.[1]

Fundamental to both factions, however, was the common belief that national defense must be strengthened through a reform of national politics. Both factions adopted some ideas from totalitarian and fascist political philosophies and espoused a strong skepticism for political party politics and representative democracy. However, rather than the confrontational approach of the Kōdōha, which wanted to bring about a revolution (the Showa Restoration), the Tōseiha foresaw that a future war would be a total war and would require the cooperation of the bureaucracy and the zaibatsu to maximize Japan's industrial and military capacity.[2]

After the Manchurian Incident, the two cliques struggled against each other for dominance over the military.[3] After Araki's resignation in 1934 and the failure of the February 26 Incident in 1936, with its subsequent purge of the Kōdōha leadership from the military, the Tōseiha lost most of its raison d'être.[4]