The Japanese occupation of Singapore in World War II took place from 1942 to 1945,following the fall of the British colony on 15 February 1942. Military forces of the Empire of Japan occupied it after defeating the combined British, Indian, Australian, and Malayan garrison in the Battle of Singapore. The occupation was to become a major turning point in the histories of several nations, including those of Japan, Britain, and the then-colonial state of Singapore. Singapore was renamed Syonan-to (昭南島, Shōnan-tō), meaning "Light of the South".[1][2]

Singapore was officially returned to British colonial rule on 12 September 1945, following the formal signing of the surrender instrument at the Municipal Building.

Events leading to the occupation

The Japanese captured all of Malaya during the Malayan Campaign in a bit more than two months. The garrison defending Singapore surrendered on 15 February 1942, only a week after the invasion of the island commenced. British Prime Minister Winston Churchill called the fall of Singapore "the worst disaster and largest capitulation in British history".[3]

Life during the occupation

The Kempeitai (the Japanese military secret police), committed numerous atrocities against the common people. They introduced the system of "Sook Ching", which means "purge through purification" in Singaporean Mandarin, to get rid of those deemed to be anti-Japanese. The Sook Ching Massacre claimed the lives of between 25,000 and 50,000 ethnic Chinese in Singapore and Malaya. These men were rounded up and taken to deserted spots around the island and killed systematically. Moreover, the Kempeitai established a network of informers around the island to help them identify those who resisted. These informers were well-paid by the Kempeitai and had no fear of being arrested. Japanese soldiers patrolled the streets and commoners had to bow to them when they passed by. Those who failed to do so would be slapped or beaten and some people would be taken away.

Other changes made while Singapore was Syonan-to

To remove Western influence, the Japanese set up schools and forced people to learn their language. Textbooks were printed in Japanese. Every morning, children had to stand facing the direction of Japan and sing the Japanese national anthem(kimigayo).

In the cinemas, only Japanese movies and propaganda films were shown. These films showed the virtues of the Japanese and made fun of the British. Going to the cinemas at all has its danger, since the Japanese might suddenly appear and take away young men to work on the Death Railway. Sometimes, they would plant themselves in the cinemas and would listen secretly to conversations, hoping to overhear anti-Japanese remarks.

The local Chinese and English newspapers had very little local news. Most of what was reported was the Japanese version of the war and pro-Japanese speeches. Radio stations were controlled by the Japanese and radio owners could listen only to local broadcasts. Tuning in to foreign broadcasting stations was done at risk. Those caught doing were severely punished or even killed. The Japanese stuck chopsticks into the ears of those who secretly listened to British or American radio broadcasts.

"Banana money" was issued during the war

Resources were scarce during the occupation. The prices of basic necessities increased drastically due to hyperinflation. For example, the price of rice increased from $5 per 100 catties (about 60 kg or 130 lb) to $5,000. The Japanese issued ration cards, also known as "Peace living Certificates" [4] to limit the amount of resources received by the civilian population. Adults could purchase 4.8 kg (11 lb) of rice per month and 2.4 kg (5.3 lb) for children. The amount of rice for adults was reduced by 25% as the war progressed.[5]

The Japanese issued banana money as their main currency since Straits currency became rare. They instituted elements of a command economy in which there were restrictions on the demand and supply of resources, thus creating a popular black market. The "banana currency" started to suffer from high inflation and dropped drastically in value because the authorities would simply print more whenever they needed it; consequently the black market often used Straits currency.

Food quality and availability decreased greatly. Sweet potatoes and yams became the staple food of most diets of Singaporeans because they were considerably cheaper than rice and could also be grown in gardens. They were then turned into a variety of dishes, as both dessert and all were used in all three meals of the day. The nutrients helped to fend starvation off; new ways of consuming tapioca with other produce were regularly invented to stave off the monotony. Both the British and Japanese authorities encouraged the population to grow their own food if they had even the smallest amount of land. The encouragement and produce were similar to what occurred with victory gardens in the Western nations during World War II.[6] Ipomoea aquatica, which grew relatively easy and flourished relatively well near the water, became a popular crop, as did other vegetables.

After taking Singapore, the Japanese established the Shonan Japanese School (昭南日本学園, Shōnan Nihon Gakuen), to educate the natives in the Japanese language. Faye Yuan Kleeman, the author of Under an Imperial Sun: Japanese Colonial Literature of Taiwan and the South wrote that it was the most successful of such schools in Southeast Asia.[7] During the occupation, the Japanese had also opened the Shonan First People's School.[8] 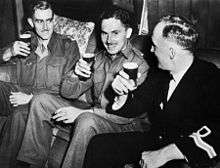 Singapore was the target of various operations masterminded by Allied forces to disrupt Japanese military activities. On 26 September 1943, an Allied commando unit known as Z Force led by Major Ivan Lyon infiltrated Singapore Harbour and sank or damaged seven Japanese ships comprising over 39,000 long tons (40,000 metric tons). Lyon led another operation, codenamed "Rimau", with the same objective almost a year later and sank three ships. Lyon and 13 of his men were killed fighting the Japanese. The other 10 men who participated in the operation were captured, charged with espionage in a kangaroo court and subsequently executed.

Lim Bo Seng of Force 136 led another operation, code-named Gustavus, he recruited and trained hundreds of secret agents through intensive military intelligence missions from China and India. He set up the Sino-British guerrilla task force Force 136 in 1942 with Captain John Davis of the Special Operations Executive (SOE). Operation Gustavus was aimed at establishing an espionage network in Malaya and Singapore to gather intelligence about Japanese activities, and thereby aid the British in Operation Zipper – the code name for their plan to take back Singapore from the Japanese. Force 136 was eventually disbanded after the war.

In August 1945, two midget submarines of the Royal Navy took part in Operation Struggle, a plan to infiltrate Singapore Harbour and sabotage the Japanese cruisers Takao and Myōkō using limpet mines. They inflicted heavy damage on Takao, earning Lieutenant Ian Edward Fraser the Victoria Cross. From November 1944 to May 1945, Singapore was subjected to air raids by British and American long-range bomber units.

Naval facilities and docks in Singapore were also bombed on eleven occasions by American air units between November 1944 and May 1945. These attacks caused some damage to their targets, but also killed a number of civilians. Most Singaporeans welcomed the raids as they were seen as heralding Singapore's liberation from Japanese rule.

End of the occupation 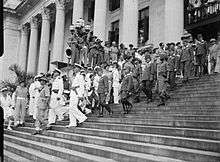 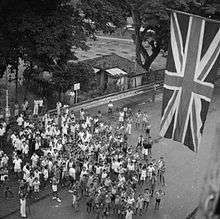 On 6 and 9 August 1945, two US B-29 bombers called 'Enola Gay' and 'Bockscar', dropped atomic bombs on the Japanese cities of Hiroshima and Nagasaki. On 8 August 1945, the Soviet Union declared war on Japan and invaded Manchuria. The bombing of Hiroshima and Nagasaki along with the entry of the Soviet Union into the war ended the Japanese occupation of Southeast Asia.

On 15 August, Japan announced its surrender. The formal signing of the surrender instrument was held at City Hall, Singapore, then known as "Municipal Hall", on 12 September. This was followed by a celebration at the Padang, which included a victory parade. Lord Louis Mountbatten, Supreme Allied Commander of South East Asia Command, came to Singapore to receive the formal surrender of the Japanese forces in the region from General Seishirō Itagaki on behalf of General Hisaichi Terauchi. A British military administration using surrendered Japanese troops as security forces was formed to govern the island until March 1946.

After the Japanese surrendered, there was a state of anomie in Singapore, as the British had not yet arrived to take control. The Japanese occupiers had a considerably weakened hold over the populace. There were widespread incidents of looting and revenge-killing. Much of the infrastructure had been wrecked, including the harbour facilities and electricity, water supply and telephone services. It took four or five years for the economy to return to pre-war levels. When British troops finally arrived they were met with cheering and fanfare.

Banana money became worthless after the occupation ended. Many individuals who had acquired their wealth through banana currency were rendered penniless overnight.

The Japanese occupation of Singapore has been depicted in media and popular culture, including films, television series and book