For other uses, see Kalki (disambiguation).

In Hinduism, Kalki (Devanagari: कल्कि; lit. destroyer of filth) is the tenth avatar of the god Vishnu in the current Mahayuga, foretold to appear at the end of Kali Yuga, the current epoch. The Purana scriptures foretell that Kalki will be atop a white horse with a drawn blazing sword. He is the harbinger of the end time in Hindu eschatology, after which he will usher in Satya Yuga.

In Tibetan Buddhism Kalachakra tradition, 25 rulers of the Shambhala Kingdom held the title of Kalki, Kulika or Kalki-king.[1] During Vaishakha, the first fortnight in Shukla Paksha is dedicated to fifteen deities, with each day for a different god. In this tradition, the twelfth day is Vaishakha Dwadashi and is dedicated to Madhava, another name for Kalki.

The name Kalki is a metaphor for eternity or time. Its origins may lie in the Sanskrit word kalka which means foulness or filth. Hence, the name translates to the "destroyer of foulness", "destroyer of darkness", or "destroyer of ignorance".[2] Another etymology from Sanskrit is "white horse".[3]

There are numerous interpretations of Vedic traditions. Avatara means "descent" and refers to a descent of the divine into the material realm in the Avatari's self same form. The Garuda Purana lists ten avatars, with Kalki being the tenth.[4]

One of the earliest mentions of Kalki is in the Vishnu Purana, dated to after the Gupta Empire.[5]

As written in the Kalki Purana:

There is a description of his background in other sources of scripture. The Kalachakra tantra, first taught by Buddha to Dharmaraja Suchandra of Shambhala, also describes his background:

Lord Kalki will appear in the home of the most eminent brahmana of Shambhala village, the great souls Vishnuyasha and his wife, the pure of thought Sumati.
— Srimad-Bhagavatam Bhag.12.2.18

Vishnuyasha refers to the father of Kalki as a devotee of Vishnu while Sumati refers to His mother in Shambhala. Also it is written in Kalki Purana that he will have four brothers who are Sumanta, Prajna and Kavi.

The Agni Purana predicts that at the time of his birth, evil kings will feed on the pious. Kalki will be born son of Vishnuyasha in the mythic Shambhala. He will have Yajnavalkya as his spiritual guru.

Parashurama, the sixth avatar of Vishnu is a Chiranjivi (immortal) and in scripture is believed to be alive, waiting for the return of Kalki. He will be a martial preceptor of Kalki, teaching him military science, warfare arts and instructing him in the performance of a severe penance in order to receive celestial weaponry.[6][7] [8] The purana also relates that Hari, will then give up the form of Kalki, return to heaven and the Krita or Satya Yuga will return as before.[9]

When the practices taught in the Vedas and institutes of law have nearly ceased, and the close of the Kali age shall be nigh, a portion of that divine being who exists of His own spiritual nature, and who is the beginning and end, and who comprehends all things, shall descend upon earth. He will be born in the family of Vishnuyasha, an eminent brahmana of Shambhala village, as Kalki, endowed with eight superhuman faculties, when the eight suns (represented by 8 solar deities or Vasu who lord over Dhanishta Nakshatra) will together shine over the sky. By His irresistible might he will destroy all the mlecchas (Barbarians) and thieves, and all whose minds are devoted to iniquity. He will reestablish righteousness upon earth, and the minds of those who live at the end of the Kali age shall be awakened, and shall be as clear as crystal. The men who are thus changed by virtue of that peculiar time shall be as the seeds of human beings, and shall give birth to a race who will follow the laws of the Krita age or Satya Yuga, the age of purity. As it is said, 'When the sun and moon, and the lunar asterism Tishya, and the planet Jupiter, are in one mansion, the Krita age shall return.
— Vishnu Purana, Book Four, Chapter 24

The Padma Purana describes that Kalki will end the age of Shiva and kill all mlecchas. He will gather all brahmanas and propound the highest truth, bringing back the ways of dharma that have been lost, and removing the prolonged hunger of the Brahmin. Kalki will defy oppression and be a banner of victory for the world.[10]

At the end of Kali Yuga, when there exist no topics on the subject of God, even at the residences of so-called saints and respectable gentlemen, and when the power of government is transferred to the hands of ministers elected from the evil men, and when nothing is known of the techniques of sacrifice, even by word, at that time the Lord will appear as the supreme chastiser.
— Bhagavata Purana, 2.7.38

It goes on to foretell his arrival:

The ascetic prince, Lord Kalki, the Lord of the Universe, will mount His swift white horse Devadatta and, sword in hand, travel over the earth exhibiting His eight mystic opulences and eight special qualities of Godhead. Displaying His unequaled effulgence and riding with great speed, He will kill the millions of those thieves who have dared dress as kings.
— Bhagavata Purana, 12.2.19-20

The Kalki Purana combines elements of earlier scriptures to describe Kalki. He will have the power to change the course of the stream of time and restore the path of the righteous. The evil demon Gali will spring from the back of Brahma and descend to earth and cause dharma to be forgotten and society to decay. When man stops offering yagna, Vishnu will then descend a final time to save the steadfast. He will be reborn as Kalki to a Brahmin family in the city of Shambhala.

Followers of Tibetan Buddhism have preserved the Kalachakra Tantra in which "Kalkin" is a title of 25 rulers in the mystical realm of Shambhala. This tantra mirrors a number of prophecies of the Puranas.

Kalki Avatar according to Sikhism 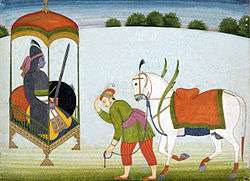 Guru Gobind Singh in his literary work uses several mythical characters from Hinduism texts, though he completely rejects such Gods and Goddesses. Kalki was described by Guru Gobind Singh in Sri Dasam Granth and forming a part of the Chaubis Avtar. Kalki is also mentioned in the oral traditions of Guru Gobind Singh known as the sau sakhis, and possibly the Sarbloh Granth. Guru Gobind Singh translates the version found in Vishnu Purana, that the Kalki is an avatar of Vishnu and that Kalki would return in Kali Yuga on horseback with sword, manifesting himself at the village Sambhal and sounding his trumpet before fighting the wicked.

When there is incest, adultery, atheism, hatred of religion, no more dharma, and sin everywhere, the impossible Iron Age has come; in what way the world will be saved? For the helpless, Vishnu himself will manifest as the Supreme Purusha. He will be called the Kalki incarnation and will be glorious like a lion coming down from heaven.

Padma will be the consort of the avatar, as written in the Kalki Purana.[11] The beloved of Kalki who is incarnation of Lakshmi lives at द्वीप dwīpa (island) सिंहले Simhalē (सिंह simha (Lion) + ले lē(of))= "the island of the lion"(1:3:9). Lion City island.

Lord Vishnu said to Padmavati that you will receive me Lord Narayana as your husband. Anyone (human, jin, demon, etc.) who desires a conjugal relationship with you will immediately be transformed into a woman, regardless of age. This curse is not applicable to Lord Kalki, who is your only husband.[12]

Predictions about his birth and time of arrival

Modern scholars have attempted to link recent history to Kalki. Given the traditional account of the Kali Yuga, which will last 432,000 years, and began in 3102 BCE,[13][14] scholar such as Sri Yukteswar Giri have claimed there are smaller cycles within the larger 432,000 year revolution.[15][16]

It is believed that the origin of Kalki will be in India on banks of river Ganges.

South Indian astrologers have analyzed Puranas extensively to try and foretell the time of birth of Kalki. The signs described in the Kalki Purana are as follows: 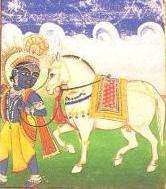 Kalki with his white horse Devadatta

The Puranas describe the date as twenty-one fortnights from the birth of Krishna, which itself falls on Janmashtami in August. This would put his descent at Vaishakha, between April and May. At this time, the father of Kalki is foretold to be overwhelmed by the incarnation of Godhead that he sees as his son. This places Kalki under the sun sign of Aries or Taurus.

The Savior of the entire universe, Maha Vishnu
will be born on Margashirsha Month, Krishna Ashtami
8th day after the full-moon day.

There have been a range of dates predicted, purportedly from different methods of calculation.[17][18] Sri Potuluri Virabrahmendra Swami, for example, wrote 400 years ago in his Divya Maha Kalagnanam,[19] or 'Divine Knowledge of the Time,' that Kalki would arrive when the moon, sun, Venus and Jupiter entered the same sign. This is not a rare occurrence and last happened in early 2012, passing without event.[20] The time of arrival of Kalki has not been consistently asserted by astrologers.[18]

People who have claimed to be Kalki