The Incheon Stadium, commonly known as the Incheon Asia Main Stadium, is a stadium located in Incheon, South Korea. Completed in July 2014, it is used mostly for athletics meets and was the main venue of the 2014 Asian Games. The stadium has been designed with an initial capacity of roughly 60,000 spectators. After the 2014 Asian Games, capacity was reduced to 30,000 spectators. The stadium has an oval running track enclosing a regulation-size soccer field. Outside, there's a tennis court, a subsidiary stadium, and the 1,415.13㎡ Yeonhui Cricket Ground.[3]

The main stadium was used for the opening and closing ceremony and Athletics competition of 2014 Asian Games. Utilizing the long linear landscape from South to North to actively connect to surrounding parks, and the natural continuity of the rooftops to facilitate the approach by spectators, in order to overcome the difficulty of approaching the long site while emphasizing the potential of the area. It attempts to depict the movements of people with the lines and soft curvatures of dancing in order to link with Seungmu (Buddhist dance), and to express dynamic movement with the tide and wind, which represent the sea of Incheon.

Populous, the global architecture firm that also designed London's Olympic Stadium has designed the stadium in collaboration with Heerim Architects and Planners. The chief feature of the stadium is its sustainability. The design configures the main facilities towards the permanent western side, while the temporary seating spaces towards the eastern side. The temporary seating will be removed after the games.

In the beginning of the stadium, the reflections of the traditional Buddhist ritual Seung Moo Dance is seen. It exhibits form and space around active movement. The forces of yin and yang form the nucleus of the architectural design. The stadium was built based on the three concepts of “incorporating light,” “bringing in the rising wind,” and “dancing with joy” to embody the energy of Incheon and the excitement shared by the participating countries through sporting events.

The five-story main stadium stretches across a total ground area of 113,620㎡ and is designed to seat over 60,000 spectators. Its two huge roofs form delicate undulating curves and its overall shape looks like a spaceship, which blends perfectly with the vast lawn plaza. The surrounding areas of the main stadium were designed in an environment-friendly manner, including the Eco Canal that connects two streams flowing nearby and Biotope, a small-scale ecological habitat. The sculptures throughout the stadium grounds are also noteworthy. After Asian Games come to an end, the main stadium will be re-purposed into a multi-use space for a wider range of cultural events[4] The stadium uses eco-friendly energy, such as solar heat and terrestrial heat, as well as state-of-the-art information technologies (IT). Seven sports facilities such sports as swimming, volleyball, tennis and bowling will get under way. 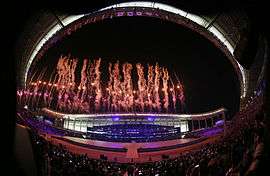 The athletes' village provided 4,500 rooms to accommodate some 20,000 players, reporters and other officials. Besides the athletes' village, Incheon was trying to secure enough accommodations for visitors during the games. Currently, there are 44 hotels and some 850 motels in the port city and the city plans to construct seven more by the time when the games opens. The IAGOC is also training public servants and athletes of Incheon to prepare them as hosts of the games. Among them are 114 players of 38 sports who will work as staffs to be assigned to sports venues.