The Azadi Stadium (Persian: ورزشگاه آزادی‎‎) formerly known as Aryamehr Stadium (Persian: ورزشگاه آریامهر‎‎) is an all-seater football stadium in Tehran, Iran. The stadium was designed by SOM and inaugurated on 18 October 1971; it is self-owned by Esteghlal F.C. and Persepolis F.C.. It is also the home stadium of the Iran national football team. It has a current capacity of 78,116 spectators,[3] though it has been able to hold more than that during special matches. The stadium is part of the much larger Azadi Sport Complex, and is surrounded by a rowing river, football training pitches, a weightlifting complex, swimming facilities and indoor volleyball and futsal courts, among many other amenities.

Aryamehr (meaning "Light of the Aryans"), renamed after Iranian Revolution to Azadi (meaning "freedom" in Persian), is the 10th largest association football stadium in the world. It was built to host the 1974 Asian Games and has hosted the 1976 AFC Asian Cup. The stadium also hosted AFC Champions League final on two occasions: in 1999 and 2002.

The stadium is located in the West of Tehran, near Ekbatan district, and is easily accessible for most people living in the city. The stadium has two entrances. The West entrance is located on Ferdous street and the East entrance is on Farhangian street. 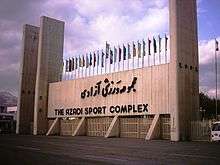 West façade of the stadium

Azadi Sport Complex was constructed by Arme Construction Company for the 7th Asian Games in 1974 with international criteria. Its land measurement is 450 Hectares and it is located in West Tehran. This sports complex not only has the ability to put in effect different local sport fields, but also is a proper place to have celebrations, meetings, different ceremonies of governmental and ordinary organizations, and sporting camps.

Though a simple bowl concrete structure, the stadium is a breathtaking sight. Situated west of the capital, an arching, slightly raised outer shell appears to give way as sweeping stands sink down to pitch side, as if the ground collapsed during building. The stadium was the focus point in 1977 of the Tehran bid for the 1984 Olympic Games, in which it would have only required slight moderations to become the main Olympic Stadium, if Tehran had won the 1984 bid. Eventually political issues saw Tehran drop its bid for 1984, leaving the eventual host, Los Angeles, the only city left bidding.

In 2002, the lower level of the stadium had seats installed, the pitch was replanted along with the installation of an underground heating system. Stadium management also plans to later install seats in the upper level of the stadium. The renovations were completed in 2003, stadium was refurnished with 35,000 seats. Despite its reduced capacity, Azadi Stadium has been filled over capacity at times such as the Iran-Japan World Cup 2006 qualification match in March 2005 which resulted in the deaths of seven people. In 2004 a large jumbotron television was added, replacing the original scoreboard. This giant screen with a total area of about 300 square meters and screen area of 104 square meters (20 m by 7.5 m) is one of the biggest in the world. The stadium hosted two West Asian Football Federation Championship in 2004 and 2008. In 2008, AFC forced Sepahan to play the home matches in AFC Champions League in this stadium after their home stadium Naghsh-e-Jahan Stadium was closed for renovation. The stadium also is the regular host for Iran U-23 for the Olympics football qualifying.

The architect of the stadium were Abdolaziz Farmanfarmaian and Skidmore, Owings & Merrill. At the beginning, the stadium had a maximum capacity of 120,000 visitors but was decreased to 84,000 after renovations in 2003. On the big occasions the crowd swells well beyond that. The design of the stadium amplifies the noise across the pitch. Opposing teams often find it difficult to play their best game, when the stadium is full, as the noise level becomes very high. According to Goal.com, Azadi Stadium was voted most intimidating in Asia.

There is enough parking for 400 cars inside the stadium, and an additional 10,000 parking spots are available outside. The nearest metro station is the Azadi Stadium Metro Station.

The record attendance at Azadi Stadium is over 128,000 during a 1998 FIFA World Cup qualifier against Australia.[5]

Panoramic view from the Azadi Stadium