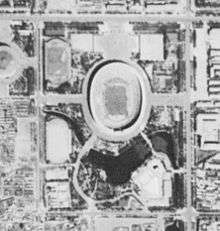 The Workers' Stadium (simplified Chinese: 工人体育场; traditional Chinese: 工人體育場; pinyin: Gōngrén Tǐyùcháng), often called Gongti or Gong Ti, is a multi-purpose stadium in the Chaoyang District of north-eastern Beijing, China. It is mostly used for football (soccer) matches.[1] The stadium was built in 1959 and was last renovated in 2004 (the concrete structure was strengthened, a new rotating display screen and energy-saving devices were installed). It has a capacity of 66,161 and covers a land area of 350,000 square meters. It is one of the Ten Great Buildings constructed in 1959 for the 10th anniversary of the People's Republic of China.

The stadium was the main venue for the 1990 Asian Games, where the opening and closing ceremonies were held. Some high attendance matches of the Beijing Guo'an football club are held at the stadium. In 1993 the stadium was host to a slew of World Records set by the world-leading group of Chinese distance runners at the 7th Edition of the Chinese National Games, the most famous being international stars and world champions Wang Junxia and Qu Yunxia, who had dominated the 1993 World Championships a month before.

The stadium holds claim to the fastest women's 1500 m time ever recorded of 3:50.46, the fastest women's 3000 m of 8:06.11 and the fastest women's 10,000 m of 29:31.78. These world records still stand today and are arguably the stadium's biggest claim to fame.[2] The next year, the stadium was partially demolished and renovated as part of China's bid for the 2000 Olympic Games - a bid which ultimately failed. The stadium continued to be a mainstay of Beijing sport into the 21st century, being the Grand Final venue of 2004 AFC Asian Cup.

For the 2008 Summer Olympics it hosted the football quarter-finals and semi-finals, and the women's gold medal final. The stadium was scheduled to host the first ever NFL game played in China, a preseason game between the Seattle Seahawks and the New England Patriots on August 8, 2007. However, the China Bowl was canceled in April 2007. The reasons given were that the NFL wanted to devote all its resources to the scheduled regular season game between the Miami Dolphins and the New York Giants to be played in London on October 28, 2007.

The stadium was the host for the 2009 Barclays Asia Trophy on 29 July and 31 July 2009, featuring Beijing Guoan, and Premier League clubs Tottenham Hotspur, West Ham United and Hull City. The areas north (Sanlitun), east and west of the stadium are popular nightlife destinations. The xi men (West Gate) offers a strip of nightclubs. The Workers Indoor Arena is located to the west of the stadium. Contrary to the usual sports occasions at the stadium, global superstar Mariah Carey began her sold-out five-show tour at the Workers Stadium.

Interior during the 2008 Summer Olympics

The stadium hosted FC Bayern Munich's pre-season China Tour of 2012, during which the Bundesliga club had a friendly match with Beijing Guoan.